18 Elm in Waterbury Creates Community at the Table 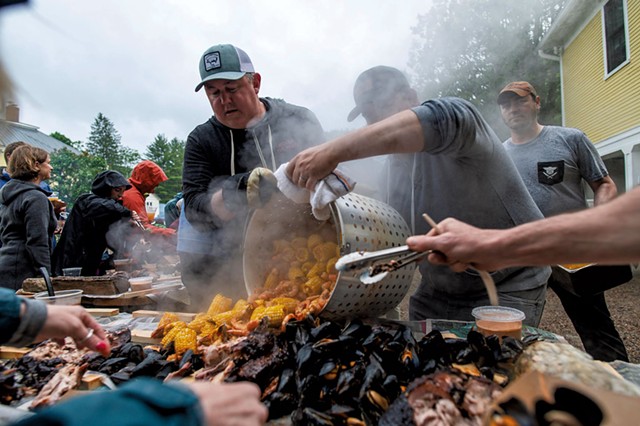 If Eric Warnstedt tells you he's winging it, take it with a grain of salt. But don't sprinkle any on his food. Just grab the fare and eat.

These are the words that Warnstedt, a top Vermont chef, spoke — "We're just wingin' it" — as he dumped a pot of shrimp and corn on the cob onto a table in a Waterbury backyard. The food, which appeared from a cloud of steam, joined a hot mess already splayed on the table: clams, mussels, sausage, potatoes (skins on), zucchini and pork.

"I feel like this is my Valhalla of eating!" exclaimed one diner at 18 Elm Street, where the feast went down on a rainy night in mid-June. "'Cause I don't even have a plate."

The serve-yourself feast that Warnstedt and his team at Prohibition Pig put together was part of a series of food events the family at 18 Elm is hosting into September.

The enthusiastic diner eating that night was appropriately dressed in a green slicker. Out of about 150 people attending, he was one of the few who was working: Ryan Miller, singer/guitar player in Guster, ate plateless and happy on break from a backyard gig at the feast. He was playing honky-tonk covers of the Smiths with Brett Hughes in a little group called the Smiths Go Western, under cover of a barn at 18 Elm.

That barn belongs to a set of buildings, painted yellow and surrounding a courtyard, a block from Main Street in Waterbury. The property has been in the Ayers family since the 1870s, when Orlo Ayers, a carriage maker and wheelwright, purchased and started to develop the land.

He was the great-great-grandfather of two current residents of 18 Elm, potter Jeremy Ayers and his cousin, Ben Ayers, who runs a community development nonprofit in Katmandu. Ben lives in Nepal half the year.

Guided by family history and a commitment to building community, Orlo's descendants are transforming 18 Elm into a cultural hub in Waterbury. They're doing so by creating and hosting events in their backyard that are designed to bring people together through food, music, drinks and arts activities.

Related In Waterbury, B&B and Events Space 18 Elm Links Past to Present

In Waterbury, B&B and Events Space 18 Elm Links Past to Present
Half an hour from Burlington, Waterbury is a destination for craft beer, world-famous ice cream and small-town charm. Now, visitors can add to their itineraries a stop — or overnight stay — at a big yellow house in the heart of town.
By Sally Pollak
BTV Magazine

"We not only want to keep the property in the family, we want to keep it as an active part of the community," Ben said. The property at 18 Elm, where he and his cousins played in the barn's cupola as kids, is imbued with "five generations of lessons" about the value of community engagement, he noted.

"I want my children to be raised by a community," Ben said. "And what better way to do it than invite people over to your yard?"

The Ayers' yard was full for the high-country shrimp boil, a $20, all-you-can-eat riff on the low-country affair. One couple was drawn to the event from the Pro Pig brewery less than a block away. They followed the smoke and the music and discovered the party at 18 Elm: a beautiful and cool community event, the couple said.

"What strikes me is, it's a multigenerational event, with people of all ages," said Courtney Giles, 34, of Duxbury, who attended with her husband. She manages the engineering lab at the University of Vermont and said she witnessed this kind of all-ages gathering when she lived in Scotland. But Giles said she finds it rare here.

"But this is awesome for that," Giles said. "Everybody's here: grandparents, little kids, parents."

Even in the rain, people lingered that night, drinking Pro Pig beer and listening to the band play some non-Smiths covers, including "You Ain't Going Nowhere" and "Girls Just Want to Have Fun."

On his break, Miller demonstrated the kind of eating event Warnstedt had envisioned: "Jump in and grab."

In one hand, Miller held a cardboard container of remoulade, a dipping sauce getting dripped on by the rain. With the other hand, he pulled food from the table in a rhythmic groove that he narrated: corn, dip, eat; potato, dip, eat; clam, dip, eat; zucchini, dip, eat; pork, dip, eat.

"I'm hovering," Miller said of his presence by the table. "I hope that people appreciate this. This is the way to a band's heart: a spread where you get taken care of."

Another multigenerational crowd convened at 18 Elm about two weeks later for the Waterbury Breakfast Club. Conceived by Georgia Ayers, Jeremy's wife, the brunch social is held every few weeks at the site. 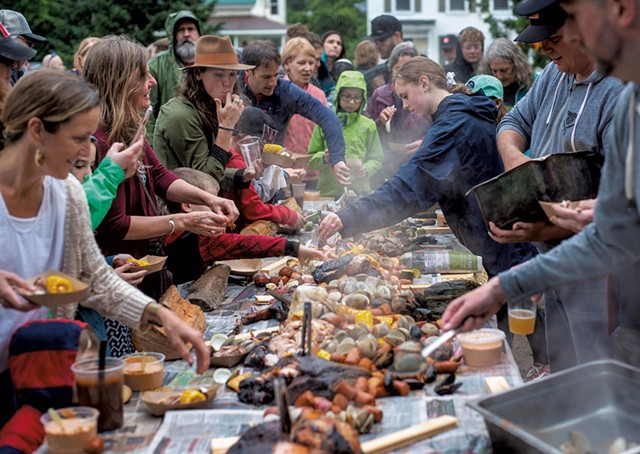 A trio performed on fiddle and accordion in the loft of a barn where, more than a century earlier, Orlo Ayers welcomed people in need of lodging (including a relative of author Nathaniel Hawthorne, according to family lore).

Under a shade tree, little kids played with possibly the largest collection of Legos in Washington County. Georgia mixed Bloody Marys in a corner of the yard. Jeremy gave pottery demonstrations on a wheel outside his shop.

"I'm excited to be here," said Maria Lara-Bregatta, who owns the business. "It's nice to get people to try something [new] out here." Her menu included empanadas and tostones — sweet and savory fried plantains.

In turn, diners said they appreciated the variety of fare at the brunch events, including global dishes not typically available in Waterbury and surrounding towns.

"I love making it over here," said Lisa Mason of Moretown, who attended with her two young daughters and family friends. "It's perfect when you don't have a plan on Sunday. It's a great opportunity to meet up with friends. And it feels so quintessential Vermont."

Though many of the occasions at 18 Elm center on food and drink, the Ayerses also organize arts events. One will take place this Saturday, July 13: 18 Elm's third annual Artist as Designer exhibition. The curated show features live demonstrations by 10 Vermont artists and designers who make home goods, clothing, jewelry, pottery and fine art.

Two dinners are planned for September at 18 Elm: a Middle Eastern meal with natural wine pairings by chef-owner Cara Chigazola Tobin of Honey Road, and an Indonesian-themed harvest feast from Carte Blanche, a Burlington-based food truck. For the latter meal, beverages by ZAFA Wines and Shacksbury Cider will be served.

Spending the night at 18 Elm is a possibility, too, in accommodations perhaps more comfortable than a hayloft. The Ayerses offer short-term rentals via Airbnb at their ancestral home.

"It's a special spot," Ben said. "It's one of those places you don't want to leave."