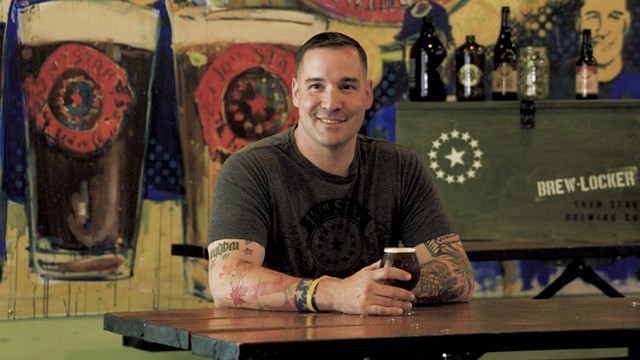 "It's fantastic in that it's kind of a validation of all the hard work that the team puts in at the brewery," Gagner, 40, told Seven Days. He went on to say that it is "a bit embarrassing" to get an individual honor for the efforts of his employees.

"We've conveyed it to the team that this is really an award for what they're able to accomplish," Gagner said.

Gagner is a major in the Vermont Army National Guard and executive officer of the Army Mountain Warfare School in Jericho, which trains about 1,000 soldiers a year in mountaineering skills such as climbing, snowshoeing and winter survival. He founded 14th Star in 2012 with Matt Kehaya, a fellow member of the Vermont Army National Guard. They conceived of the brewery while serving in Afghanistan in 2010.

"There's a few things you think about when you're deployed," Gagner said. "And beer is certainly one of them."

Longtime homebrewers, the guardsmen recognized that beer "really gave the everyday guy the ability to open up and say what was on their mind," Gagner said. At the same time, they thought brewing would be a "great vehicle for supporting community."

Since it opened, 14th Star has grown from two part-time workers — Gagner and Kehaya — to a company with 24 employees. Its production has increased from 31 to 1,000 gallons per batch, with distribution in six states.

Yet one element remains a constant: community service. The brewery donates a portion of beer sales to local nonprofits and has organized food drives and raised money to buy holiday turkeys for people in need.

"Our first call is to improve community and help veterans," Gagner said. "The best we can say is that we've shown as business owners that being a good corporate citizen can be just as profitable as chasing the bottom line."

The state winners of the Small Business Person of the Year award will convene in Washington, D.C., on May 9 and 10 for the announcement of a national honoree.

The original print version of this article was headlined "Beer Salute"