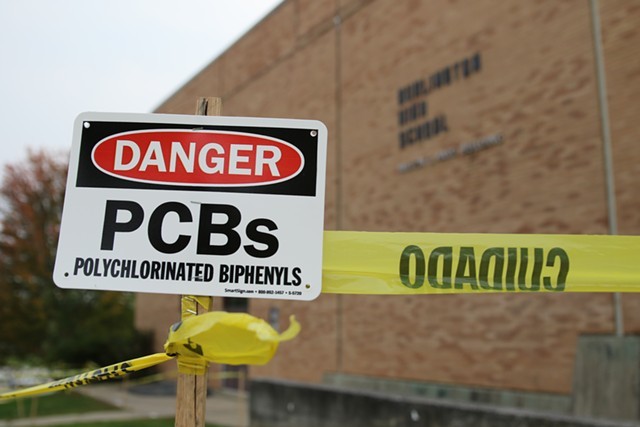 Vermont Department of Environmental Conservation officials are asking state legislators for a two-year extension on the deadline to test schools for airborne PCBs. They say the extra time will allow them to better support schools that detect contamination from the toxic chemicals, also known as polychlorinated biphenyls .


Last year, lawmakers allocated $4.5 million to test every Vermont school constructed before 1980 for PCBs. The deadline: July 1, 2024. The legislation followed the discovery of airborne PCBs at Burlington High School in the fall of 2020 — as the school district prepared for extensive renovations — that led to the campus's closure. Last year, Burlington school commissioners voted to raze the existing building and build a new one on the high school's Institute Road campus.

State officials have prepared for statewide PCB testing by surveying schools to see which ones qualify and contracting with six environmental consulting firms to conduct the work. They've also released updated guidance that details what schools must do if certain levels of contaminants are found.

"I think we set ourselves up for an inability to provide that level of service that Vermonters are going to want in response to the discovery of PCBs in school if  we try to rush the testing process," Walke told lawmakers.

Of Vermont's approximately 450 schools, at least 318 qualify for PCB testing because they were constructed or renovated in the days when the chemicals were used in building materials like window caulk, lighting ballasts and tile adhesive. Seventy more schools have yet to respond to the state's survey that determines their eligibility, Coppolino said.

Tests will cost between $15,000 and $20,000 for each school, Walke said. The full testing process — from figuring out what rooms need to be tested to getting the results back to the community — will take six to eight weeks.

In an interview on Tuesday, Coppolino elaborated on her desire to have the deadline pushed.

"It's a lot of schools, and it's technical information, and I want to make sure that staff can have the opportunity to review everything carefully [and] provide considerate responses and assistance to the schools," Coppolino said. "Just sampling the schools is easy, but it doesn't take into account what happens if indoor air issues are identified in a school."

Coppolino said testing will likely begin between April and June of this year.

In the committee last week, Sen. Brian Campion (D-Bennington) questioned Walke and Coppolino about whether it was wise to draw out the testing process, given that it could potentially mean that students were exposed to harmful chemicals for a longer amount of time. Walke said the DEC would make sure that schools most likely to have contamination — for example, those built during the "heyday" of PCBs, between 1960 and 1980 — would get first priority for testing.

One critical question is how PCB cleanup will be funded. Act 74 gives the DEC authority to require remediation when elevated levels of PCBs are found — but provides no funds.

Last week, Campion urged Walke to reach out to Vermont's federal delegation to try to secure funds to address any contamination. Walke also floated the idea of working with the attorney general's office to file litigation to get funding. Monsanto, the sole producer of PCBs in the U.S. from 1935 to 1977, recently paid millions to students, parents and teachers exposed to the chemicals through PCB-laden light ballasts at Sky Valley Education Center in Washington state.

The DEC plans to bring a more detailed timeline for testing to legislators later this spring. Lawmakers would have to pass new legislation in order to extend the testing deadline to 2026.