Voters Reject School Board Candidates With Divisive Platforms | Off Message 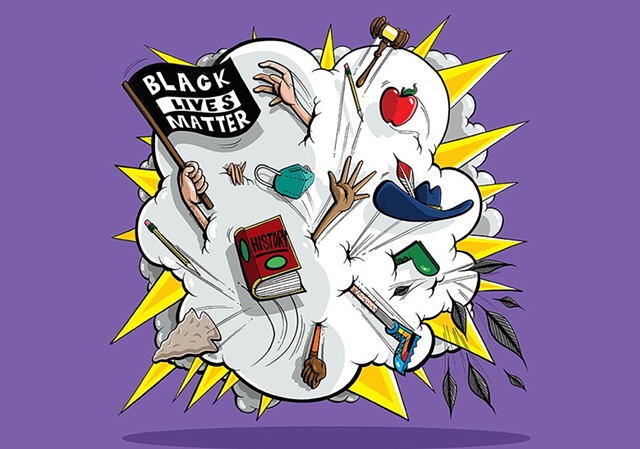 Last month, Seven Days documented the phenomenon of national culture war issues filtering down to the local school board level, where elections are nonpartisan. But those Vermont candidates, running for boards including Mill River, Milton and Springfield, failed to garner enough support for their grievances about critical race theory, "socialism" and "indoctrination" of students.

In Milton, three candidates — Brock Rouse, Nichole Delong and Scott O'Brien — sent out a manifesto citing those exact issues, and all lost by hundreds of votes.

Had Rouse, Delong and O'Brien won, they would have formed a majority on the five-member school board. Some community members feared that could have led to a reversal of some recent equity initiatives in the district.

Milton School Board Race Jolted By Candidates’ Manifesto
By Alison Novak
Off Message
In Rutland, a debate over the Raiders mascot fueled a crowded race, with 10 candidates running for four seats. The school board had first ditched — then brought back — the name in a matter of 18 months.


A slate of four candidates — Karen Bossi, Heather Hauke, Cindy Laskevich and Bob Pearo — had support from Republican LG candidate Gregory Thayer, who described them as "pro-Raider, anti-Woke and Indoctrination."

Lennox-Levins received the most votes — 1,456. Collins came in second with 1,442 votes, followed by Bossi with 1,296 and Doenges with 1,295. Bossi, who previously served on the Rutland City Board of Alderman, was the sole candidate from the pro-Raiders slate to win.

Rutland City voter turnout was higher than normal, deputy clerk Tracy Kapusta said, and the city ran out of ballots, forcing the clerk's office to use photocopies. The photocopied ballots needed to be counted by hand, which delayed election results.


Alison Notte, a current Rutland City school commissioner who supported removing the Raiders mascot, wrote in an email Wednesday that she was heartened by the outcome.

"I believe with the results Rutland is in a much more favorable position to educate our children and welcome New Americans to our community," Notte wrote. "We need to grow our population and retain our youth to be a viable community."

Furthermore, Notte said, "I think it is promising for our children and communities that single-issue candidates did not win many seats across the state."


In Springfield, where five candidates were vying for two school board seats, Mary Krueger and Denise Hunter emerged victorious. Krueger, who told Seven Days she ran because others were spreading divisive misinformation about critical race theory, was the top vote getter with 619 votes; Hunter earned 587.

In a Facebook message Tuesday night, Parent thanked her supporters and wished the newly elected board members well.

"I was able to make great friends, raise awareness to a much needed area and even managed to get 382 votes after all the attacks on my character," Parent wrote. "I’m proud of the work I put in and I tried my best."

In the race for Mill River Unified Union school board, Ingrid Lepley — a candidate for the Tinmouth seat who until recently ran an Etsy shop selling QAnon-inspired jewelry — lost to Josh Squier, 124 to 103.

In Shrewsbury, Kristine Billings — a vocal critic of critical race theory  — lost her bid to incumbent board chair Adrienne Raymond by 28 votes.

Luke Hall, who resigned from the Vermont State Police last year after being suspended for posting comments on Facebook supporting "the great Patriots in Washington D.C." on January 6, lost his race for a three-year seat on the Arlington School Board to incumbent Nicol Whalen, 420 to 118.

The sole contested school board race in Burlington was in Ward 4. Incumbent Martine Gulick garnered 73 percent of the vote, handily defeating challenger Ericka Redic. The host of a conservative YouTube show called “Generally Irritable,” Redic is also running for the U.S. House of Representatives as a Republican.


Vermont GOP chair Paul Dame — who had encouraged Republican candidates to run for school board to counteract Emerge Vermont, an organization that trains Democratic women to run for office — said in an email Wednesday that he did not see the results as a political referendum.

The second time was a charm for Reier Erickson, who won the St. Albans City seat on the Maple Run School Board after losing last year. Erickson, who advocated successfully to get uniformed police officers out of district schools, beat Keith Longmore, 1,344 to 746.

Longmore, chief operating officer of Green Mountain Hemp Company, declined interview requests and turned down the opportunity to appear at a forum with Erickson last month. Longmore also claimed on Facebook that Black Lives Matter supporters were responsible for the January 6, 2021, insurrection at the U.S. Capitol and called Vermont teachers “selfish.”

In an email to Seven Days Tuesday night, Erickson said he was looking forward to getting to work.

"What we saw today was a rejection of the politics of fear," Erickson wrote of the election results. "Across the state, voters rejected hateful rhetoric and instead put their trust into the hands of those who wanted better."

Dame, the GOP chair, is already thinking about next year.

"The Republican Party did not provide training or resources to school board candidates this election," he wrote. "But if Emerge VT continues to make local elections more partisan by supporting only Democrats and turning away Conservatives and Independents it may be something our party considers getting more involved in for 2023."
Prev
Next