The iconic E.T. & H.K. Ide grain mill buildings in St. Johnsbury have been sold to a company that plans to use them for processing industrial hemp.

The two cousins behind Zion Growers, Travis Samuels and Brandon McFarlane, said they also have their sights set on a 200,000-square-foot industrial building 100 miles to the southwest, in Proctor, that was once home to the Vermont Marble Company. By the fall harvest, the two say they'll be ready to process hemp into fiber that will be used to create building materials, animal bedding and cardboard.

Hemp — a version of the cannabis plant that won't get you high — is a sustainable replacement for materials such as plastic and composites, said McFarlane, a real estate attorney in Florida who graduated from Norwich University. McFarlane said processing hemp into paper, textiles, and "hempcrete" — a construction material — is more environmentally friendly than using traditional materials. He expects the market to grow.

“We see those as the three main players in the future where hemp is going to either be heavily involved or completely take over in the next couple of decades,” he said.

Zion Growers got its start in the hemp gold rush of 2019, after 2018 changes to federal law prompted people around the U.S. to start growing cannabis for cannabinoids such as CBD. The plant components became a popular supplement — thought to have health benefits — that was added to food, drinks and beauty products.

The two cousins grew five acres near Samuels' home in Barnet in 2019. But, like many other growers, they discovered that the supply in the market far outstripped the demand.

“All five acres of that is still hanging in a barn somewhere in Barnet, because we weren’t able to sell it,” McFarlane said.

CBD prices have since plunged. But the two cousins saw a future in industrial hemp, and they started looking for ways to supply the processing capacity that’s  in short supply locally.

Sow Much Hemp: A Large Harvest Prompts Fears of Oversupply
By Kevin McCallum
Business
The two took their idea for a hemp processing business to LaunchVT last year. There, they got help rewriting their business plan and won the $15,000 grand prize in the annual business competition, which is put on by the Lake Champlain Chamber.

Industrial hemp, once a common manufacturing material, is getting a closer look these days. The University of Vermont has been studying the business of industrial hemp for years, and will host an undergraduate fellowship on the topic this summer for the U.S. Department of Agriculture, drawing scholars from around the country.

Vermont requires all cannabis growers, including those growing the plant for use as industrial hemp, to register with the state. Zion Growers has yet to do so, but four others have registered this year to grow and process hemp fiber, according to the state Agency of Agriculture, Food and Markets. 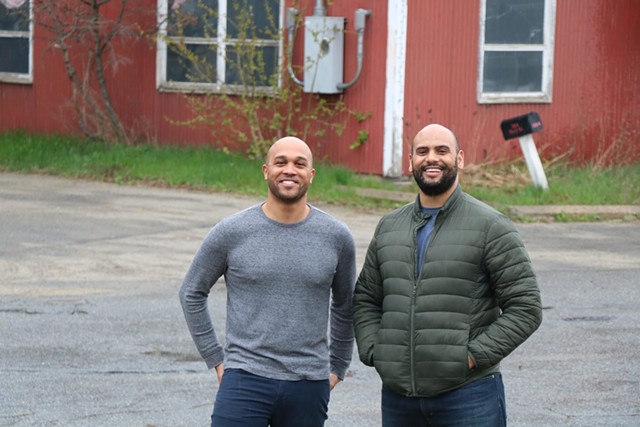 Samuels and McFarlane worked with officials in St. Johnsbury for about a year before they closed on the sale of the mill in late December. When news broke of the impending sale, the Preservation Trust of Vermont got in touch about the Vermont Marble Company building. For a decade, the trust has owned an 87,000-square-foot portion of the building. The rest is privately owned, though Zion Growers is negotiating to buy it all. All told, it's a very large space.

"It's the size of an Amazon warehouse," McFarlane said, only half joking.

They have investors on board to help them pay for the $3 million St. Johnsbury project, as well as $165,000 in tax credits, grants and technical assistance from federal, state and city programs.

“Vermont is a very charitable state as it comes to providing the type of funding you need, especially with these older buildings,” McFarlane said.

The purchase is good news in St. Johnsbury, which is undergoing a minor economic revival these days. The centerpiece is a large downtown housing and retail project, New Avenue Apartments, that is nearly complete.

Twelve new businesses opened in St. Johnsbury last year, according to Gillian Sewake, the director of the local chamber of commerce. She grew up in Waterford and went to high school at St. Johnsbury Academy in the 1990s. Back then, she never seemed to hear good news about the town.

“Right on the front page of the newspaper, they were covering the fistfights in front of the Depot Square Apartments,” she said. “There was, I would say, a prevailing attitude that something was wrong with St. Johnsbury.”

But things started turning around in 2015, Sewake said, after the Vermont Council on Rural Development helped locals come up with a plan for reviving the downtown. While Caplan’s Army store, a longtime fixture, closed at the end of 2020, the new businesses have filled once-empty storefronts and brought visitors to the area. The new housing project, the work of the affordable housing organization Evernorth, adds 40 much-needed apartments. And the retail space below is already spoken for, Sewake said.

The company behind the old mill, E.T. & H.K. Ide, got its start in 1813 when local resident Timothy Ide purchased a mill on the nearby Passumpsic River in Barnet. That mill burned, and the family eventually built in St. Johnsbury. They have conducted business as E.T. & H.K. Ide since 1897, according to a family history.

The sale of the Ide complex, which occupies just under an acre right off the main drag, Railroad Street, is a particular triumph because the distinctive old buildings are one of the most visible representatives of industry in St. Johnsbury, Sewake said.

“It takes a dilapidated industrial building and puts energy and creativity and people into it,” Sewake said. She added that the family behind Fairbanks Scales — another iconic local business — got its start in the mid-1800s weighing hemp, which was then a common crop used for industrial purposes.

The historical importance of the purchase is not lost on its new owners. Samuels, who grew up in Barnet, remembers when high school students used to skateboard inside the mill. In business meetings over the last year, he’s heard many people reminiscence about visiting the Ide complex as children to pick up coal or grain.

Like Sewake, Samuels said people used to complain about St. Johnsbury, or blame fellow townspeople for its problems. But now, he said, residents seem more hopeful about its future. He feels fortunate to have a hand in reviving the mill’s history.

“Making this building ... useful, with the kind of change the town is going through, is as much emotional as it is for the economics of it,” Samuels said.

The hemp business is moving fast. The two cousins hope to close on the Proctor building — which they expect to use as storage — in March, and Samuels has been meeting with farmers to talk about the ins and outs of growing hemp for industrial uses. The cousins won't be growing hemp themselves, at least not immediately.

The crop can be harvested with the same equipment used for harvesting hay, Samuels said. “We’ve spoken to a good number of people about getting in on this,” he said. Many ask about CBD.

“It’s questions of, ‘Is this actually going to happen? Can I make money off this without going bankrupt in the process?’” Samuels said. “Which is completely fair, considering some people did go bankrupt trying to do CBD.”

Farmers, though, are clearly open to diversifying, he said.