Regulators Deny GlobalFoundries' Bid to Be Its Own Power Company 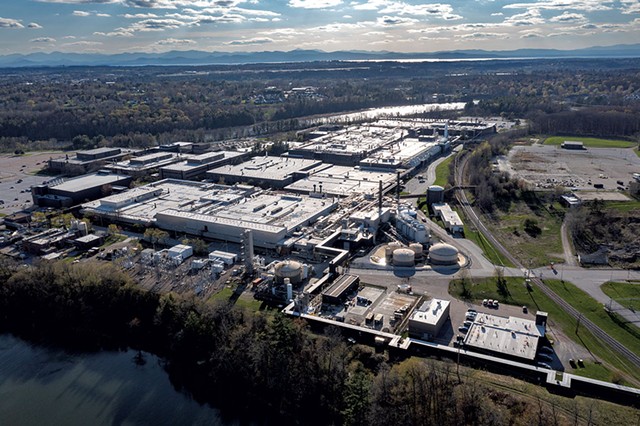 Regulators have pulled the plug on semiconductor giant GlobalFoundries’ plan to slash its power bills by becoming its own utility.

The Vermont Public Utility Commission on Thursday rejected the company’s request to set up a “self-managed utility” to supply its massive Essex Junction chip plant with electricity instead of buying it from Green Mountain Power.

The commission ruled that it didn’t have the authority to exempt the company from state rules requiring utilities to purchase some of their power from renewable energy sources.

Environmental groups praised the move, while company officials were
“disappointed with the decision and are now in the process of assessing the impact and next steps,” spokesperson Gina DeRossi wrote in a statement.

GlobalFoundries Asks to Leave Green Mountain Power to Form Its Own Utility
By Kevin McCallum
Tech
The law, passed by the legislature in 2015, requires utilities to get a gradually increasing percentage of their power from renewable sources every year. By 2032, electric utilities are supposed to get at least 75 percent of their total power from renewable sources, and 10 percent from new renewable power sources built in the state, such as wind and solar.

The PUC said it didn’t have the ability to waive the requirement for GlobalFoundries because lawmakers meant the Renewable Energy Standard to be broad in scope.

“The legislative intent was to impose this requirement on all electricity, whether sold, provided or offered in the State,” the PUC found.

GlobalFoundries uses a staggering amount of electricity — 400,000 megawatt hours per year. That’s as much as the entire city of Burlington and 8 percent of all the electricity consumed in the state.

Despite a discounted power rate relative to residential customers, GlobalFoundries says it pays nearly twice as much for power in Vermont as it does in New York State, where it has factories in East Fishkill and Malta.

GlobalFoundries Moves Headquarters to New York's Capital Region
By Kevin McCallum
Off Message
Company officials argued that in order to remain competitive and attract future investment in the former IBM facility here, they needed to rein in costs by closely controlling their power supply.

The company says the plan made sense because, unlike most businesses, it already taps directly into the state’s network of high-voltage transmission lines. Officials also noted that GlobalFoundries staff have experience running the elaborate power distribution system on the 725-acre campus.

If its request had been granted, the company said it stood ready to pay millions of dollars to GMP to offset the loss of its largest customer, which represented 10 percent of the utility’s load.

But the PUC ruling seems to short-circuit those plans and leaves the facility’s future in doubt.

Last year, Greg Rieder, a top manager at the plant, known as Fab 9, warned that if the property failed to remain competitive, its Malta-based owner would likely invest funds elsewhere, relegating the local facility to “a slow death.”

Others, including lawmakers, have questioned whether the company needed the special treatment or would actually follow-through on threats to move production elsewhere at a time when the demand for microchips so high.

The Conservation Law Foundation was one of several groups that opposed what it called an effort to evade state renewable energy rules aimed at fighting climate change. In a statement, Chase Whiting, a staff attorney for the organization, said the PUC decision was “the right call.”

“Allowing GlobalFoundries to skirt the state’s climate laws would set us back years in reaching our pollution reduction goals,” Whiting wrote. “This would be nothing more than an illegal loophole for a wealthy corporation, and officials saw right through it.”

Company officials have said creating its own utility would have actually helped it invest more heavily in renewable energy projects.