COVID Cases Continue to Drop Sharply in Vermont | Off Message 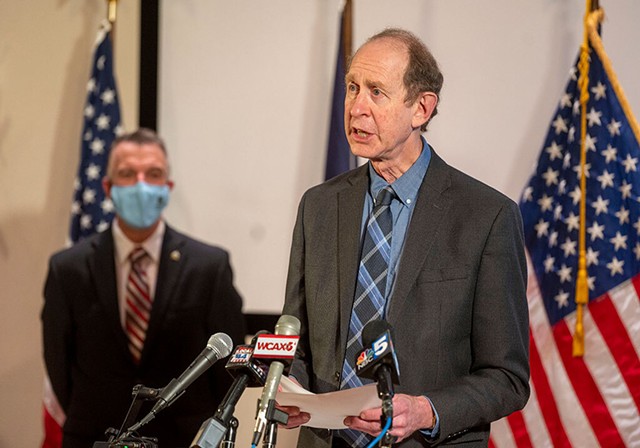 COVID-19 cases are still falling in Vermont, offering more hope that the Omicron wave has peaked.

The seven-day case average, while still far higher than it has been for much of the pandemic, continued its precipitous drop this week, sitting at 670 on Tuesday. That’s about a third of what that figure was just three weeks ago and represents the lowest it has been since late December.

Hospitalizations are also trending down, though more slowly. Ninety-four COVID-19 patients were in hospitals on Tuesday, down from a high of 122 on January 19; 26 of those patients were in intensive care.

“The trends continue moving in the right direction, and there's significant improvement across the region,” Gov. Phil Scott said at his weekly press briefing on Tuesday, “so there's not much new for me to say on the COVID front other than I'm very encouraged.”

Officials said infection rates are projected to continue to fall.

Health Commissioner Mark Levine used most of his remarks at Tuesday’s press conference to advocate for booster shots, citing a recent national study showing people who received them are far more protected against Omicron than those who haven’t. Only about 61 percent of Vermonters over age 18 have received a booster, far shy of the 90 percent Levine has cited as a goal.

But the health commissioner also tried to address a question on the mind of many Vermonters right now: What’s next?

Related In the Mad Dash for Rapid COVID-19 Tests, Unhoused Vermonters Have Been Left Behind

In the Mad Dash for Rapid COVID-19 Tests, Unhoused Vermonters Have Been Left Behind
By Chelsea Edgar
Health Care
Many health experts believe the latest COVID surge has hastened America’s entry into the endemic phase — the point at which the virus becomes a permanent part of life, producing milder illnesses people must learn to live with and manage. But they say it’s too soon to know exactly when that shift might occur, citing uncertainties surrounding potential future variants.

Levine said he was optimistic Vermont was heading in the right direction. “It may seem like we've been stuck in the Bill Murray Groundhog Day movie, repeating the same day again and again for the past two years,” he said. “But in fact, we are indeed moving forward.”
Prev
Next