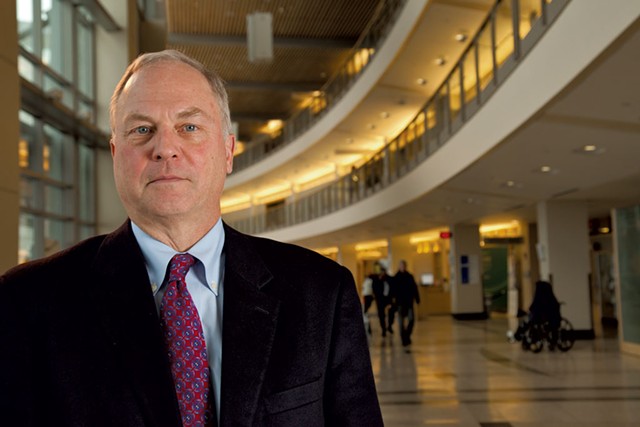 Dr. John Brumsted, president and CEO of the University of Vermont Health Network, will retire at the end of September.

Brumsted has been the network's first and only leader since it was created a decade ago. The health network says it has launched a national search for his replacement.

"We have experienced and accomplished so much together, and we created something new — an integrated health care system — to respond to the needs of the patients we are so privileged to serve," Brumsted said in a press release.

The decision comes at a tumultuous time for the health network, which has rapidly expanded under Brumsted to now include six hospitals in Vermont and northeastern New York.

Network hospitals have been struggling to keep pace with a prolonged surge of patients, COVID-19 and otherwise, while a number of pre-pandemic problems — including chronic staffing shortages and long patient wait-times — have metastasized into a full blown crisis over the last year.

Following a Seven Days investigation into some of these issues at the network's flagship hospital, the UVM Medical Center, state regulators launched a probe looking at health care access across Vermont. A final report is expected to be made public in the coming days.

"We have faced many challenges, and there is no doubt that there will be more challenges in the future," Brumsted said in the news release announcing his retirement plans. "I am confident that this organization will continue to innovate and improve the way we serve and advance the health of our patients and our communities, now and into the future.”


​​Brumsted, 69, spent almost his entire four-decade medical career in Vermont, starting with an obstetrics and gynecology residency at what is now the UVM Medical Center. But his first real gig as a doctor was in western New York, through a two-year placement with the U.S. Public Health Service.

Recalling the experience during an interview with Seven Days last year, Brumsted said he often puzzled over how to get his rural patients access to services in bigger cities.

"A lot of times, nobody was really listening," he said. "I very much understood that the way that people can get care, particularly in a rural environment, you have to have a system ... and so that's what we've tried to do with the UVM Health Network."

Indeed, the health network has rapidly expanded under Brumsted’s leadership, acquiring four hospitals and numerous independent doctors offices over the last decade. It now employs 15,000 people across New York and Vermont while counting roughly 1 million people among its pool of patients.

"John Brumsted was the right person at the right time for the UVM Health Network," network board chair Allie Stickney said in a statement. She will be leading the search for the organization’s next top executive. "Through his leadership, Dr. Brumsted not only shaped an integrated health care system in Vermont and Northern New York but did so in a way that leaves a legacy of trust and caring." She added that he has also left an "outstanding foundation" for his successor.

Not everyone agrees with that assessment — including many of Brumsted’s frontline employees, who have spent years criticizing him for what they see as a top-down leadership style.

Asked for comment about Brumsted’s retirement on Tuesday, Deb Snell, president of the UVM Medical Center nurses’ union, said she was more curious to see who replaces him, and whether that person will be "more willing to partner with us."