Colchester Manufacturer Hazelett Strip-Casting Is Sold to an Austrian Company 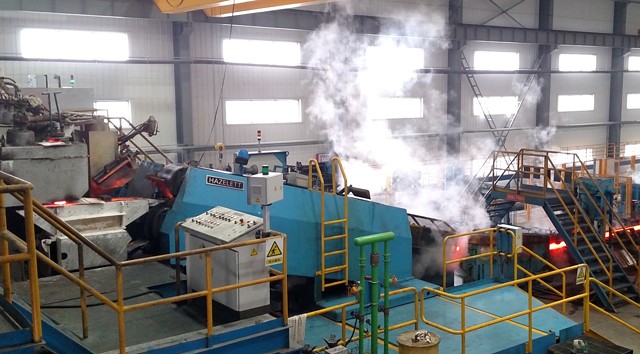 Hazelett Strip-Casting Corp., a family business that has been manufacturing metals machinery in Colchester since 1956, has sold a controlling interest to a longtime industry contact in Austria.

Hazelett employs about 160 people in Vermont and a dozen at its subsidiaries in China and Ontario, Canada. The company manufactures huge machines that create metal parts used in products around the globe, such as cellphones, computers, appliances, automobile bodies and roofing.

Hazelett family members didn’t say how much the buyer, EBNER Group, paid to become a majority owner this month. President David Hazelett, whose grandfather Clarence Hazelett started the company, will remain in that role and as a shareholder.

The firms have worked together for years. Hazelett chose EBNER from several suitors because it'll run the business in a manner consistent with the family’s values, said Ann Cordner, David’s sister and a longtime vice president at the Colchester company.

Like Hazelett, EBNER is a fourth-generation family business that values its employees and strives to be environmentally sustainable, Cordner said.

“We will still be Hazelett, and we will be here," she said. "The whole idea is that everything will stay the same."

Hazelett got its start when Clarence Hazelett developed what are known in the industry as continuous casting machines in 1919 in Connecticut. He turned his work into a business in 1924, and his sons moved the company to Colchester in 1956, incorporating it as Hazelett Strip-Casting. The company has expanded at its site on Malletts Bay many times over the years.

EBNER is an industry leader in supplying sheet metal for auto bodies, David said. Hazelett has developed a new process that will be combined with some of EBNER's technology to produce the aluminum used in lightweight vehicles — something that many industry leaders expect to play a large role as auto manufacturers shift to electric vehicles.

“This new partnership with EBNER will just enhance our ability to stay at the cutting edge," David said. "That's why we are here today, and will be here tomorrow." Mazza said the Hazeletts are longtime family friends. “They’ve employed a lot of folks over the years,” said Mazza, listing many of them. “It has expanded very nicely.”

Frank Cioffi, president of the Greater Burlington Industrial Corporation,  said he, too, has known David Hazelett for 30 years, and knew his father, too. The company is known for pursuing environmentally sustainable practices long before other firms its size did. Cioffi expects that work to continue under EBNER's ownership.

“Knowing the Hazeletts, they are really good judges of character,” he said. “I wouldn’t see them doing anything to compromise the Hazelett name and brand.”
Prev
Next