Senate Panel Takes Another Run at Adding to Unemployment Checks 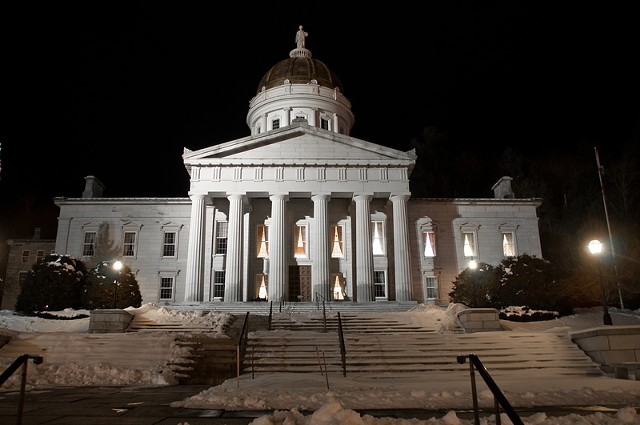 After their attempt last year was sidelined by the feds, lawmakers are taking another run at adding $25 to weekly unemployment benefits.

“We need to step back and make sure we are meeting the needs of families experiencing unemployment right now,” said Sen. Kesha Ram Hinsdale (D-Chittenden), a cosponsor of S.221, which was introduced last week. Ram Hinsdale said she has heard about people who have missed weeks of work as COVID-19 infections moved through their families. If they can’t afford to miss work, she said, they face difficult choices.

“In this moment, people are choosing to go to work sick because there are no immediate resources to help them stay home,” she said.

The idea of adding money to weekly unemployment insurance checks became a heated issue last year after Ram Hinsdale and some other members of the Senate Committee on Economic Development, Housing and General Affairs tried to include the money as part of a general bill on unemployment insurance that passed in the spring.

Lawmakers later learned from the state Department of Labor that federal rules prevented Vermont from tacking on the additional payments — and that even if they found a way to supplement the checks, the condition of the aged Labor Department mainframe would make it difficult for the state to send the payments out to claimants.

Painful Lessons From the Past Inform Labor Department’s $30M Computer Overhaul
By Anne Wallace Allen
Tech
Members of that committee lambasted Labor Commissioner Michael Harrington, saying he could have informed them sooner and enabled them to get the money to claimants some other way.

On Friday, Sen. Michael Sirotkin (D-Chittenden), the committee chair, said the language in S.221 will satisfy the technical problems and meet the committee’s goal of getting extra money to claimants.

“We can’t just close our eyes and make believe we never made this promise to raise peoples’ unemployment benefits by $25 a week,” he said.

Last winter, when Sirotkin and his colleagues started talking about getting extra help to unemployment claimants, vaccinations had only recently become available, many businesses were closed or operating at limited capacity, and about 15,000 Vermonters were collecting unemployment insurance.

Since then, businesses have reopened and labor is in short supply. Only about 3,660 people collected benefits at the beginning of the month, Harrington said Tuesday — significantly lower than the 5,600 collecting benefits in early January 2020, before the pandemic. Harrington said employers in construction and the granite industry usually lay people off every winter but have kept them on this year because they’re so busy.

A legislative study committee examined some of Vermont’s unemployment-related issues last year and released a report in December. It found that in 2020, when nearly 100,000 people were added to the unemployment benefits system as a result of the pandemic, nearly 30 percent of Vermonters on unemployment were eligible for the maximum weekly benefit, then $531. About 37 percent received a weekly benefit of $340 or less. The maximum benefit has since been raised to $583.

Most claimants also received supplemental unemployment benefits of $600 per week from the federal government until mid-summer 2020.

Money from unemployment claims is typically drawn from the state's unemployment trust fund, which employers pay into. But the proposal for the $25 weekly supplement calls for using some of Vermont's federal COVID-19 relief money. S.221 also seeks to permanently increase Vermont's weekly benefit amount.

Harrington said Tuesday that the administration doesn’t support the idea of raising benefits more. The existing benefit amount is reasonable, he said, and was never intended to provide long-term support to individuals and families. Creating a system to get the extra money to claimants “creates a lot of unneeded chaos in the system when we are trying to get back to some semblance of normalcy,” he said.

“If the legislature wants to explore what it would look like to increase benefits, then we need to fully understand what would the burden be on employers, and what is a reasonable benefit amount to have so the individual can still pay for his most basic needs and care for their family while unemployed," Harrington said.

Unemployed Vermonters Won't Get $25 Supplements — at Least Not This Year
By Anne Wallace Allen
Off Message
Committee member Sen. Randy Brock (R-Franklin) doesn’t support the measure either, partly because raising benefits permanently would increase the amount employers must pay into the trust fund. And he thinks raising benefits could discourage people from returning to work.

“The whole concept of unemployment is you are paying people who are laid off and available for work and can’t find employment,” he said. “People can find employment now; our major problem in Vermont is the lack of employees.”

Ram Hinsdale said she hopes the committee will continue to examine the issue of benefit payment amounts overall. But she sees the $25 supplement as a temporary measure to help people over the next year.

“I am personally going to continue to say, as we discuss unemployment, that this is an urgent priority around emergency unemployment benefits, with the most contagious variant we have seen thus far,” she said.
Prev
Next

LandWorks founder designed iconic Vermont signage and parks, and was full of energy and life until the absolute end

Artist and animal lover had a deep capacity for love