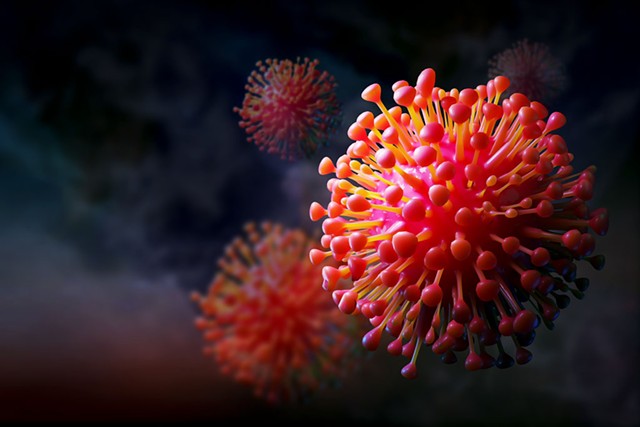 The number of new COVID-19 cases in Vermont is soaring amid a holiday-fueled surge, and hospitalizations are also back on the rise.

The Vermont Health Department reported 2,188 new COVID-19 cases on Thursday, 540 more than the previously daily record set earlier this week. The state has averaged more than 1,000 cases daily over the last week. The true number of infections may be higher given the likelihood that some people who tested positive using at-home rapid tests have not reported the findings to the state.

Perhaps more troubling: The number of people hospitalized with the virus has spiked from 54 to 91 over the last nine days, coinciding with a marked increased in the rate of infection among older Vermonters. There has yet to be a similar jump in the number of people in intensive care units, a figure that has hovered below 20 for nearly a month.


Thursday's substantial caseload comes just two days after state officials — who did not hold a regular press briefing this week — warned in a written report that the number of new infections in Vermont would "sharply increase" as Omicron continues to scorch the region. Cases were climbing in all 14 counties, the report said, while 11 set records for the number of new infections.

The rate of breakthrough infections among fully vaccinated people doubled over the previous seven-day period. That's consistent with "Omicron’s vaccine-evasion qualities," officials wrote. But they stressed that the vaccines were still holding up well against the worse impacts of the virus, noting that people who were not fully vaccinated were more than 20 times more likely to be hospitalized or die.

COVID-19 Tests Are the Hot Holiday Item This Year in Vermont
By Colin Flanders
Off Message
The surge of cases in Vermont mimics what the rest of the country is experiencing. The U.S. is now averaging more than 500,000 cases daily, far more than any other time during the pandemic, turning hotspot maps into a kaleidoscope of deep yellows, oranges and red.

On Thursday, Gov. Phil Scott announced that the state was opening registration for booster shots for children between the ages of 12 and 15 following approval from the Centers for Disease Control and Prevention. State officials also said that anyone 16 or older who received the Pfizer vaccine can now get a booster after five months instead of six.

“As the nation confronts the highly transmissible Omicron variant, receiving a booster shot is critical, offering maximum protection and limiting disruptions we know the variant will cause,” Scott said.


Scott also announced on Thursday that Vermont will soon deliver 500,000 rapid COVID-19 tests to households across the state through a pilot program in partnership with the National Institutes of Health.

The effort will help state officials work out any kinks before deploying a broader delivery program through which residents will be able to order tests online using a state website. The federal government is expected to roll out a similar program later this month.

“In the near future, we anticipate rapid tests will be readily available at every local pharmacy for lower prices,” Scott said in a press release. “But we need to bridge the gap between where we are today and where things will be in the months ahead.”

He went on to urge Vermonters to have “clear expectations” about the capacity and purpose of the pilot program.

“While our primary objective is to get tests into the field as efficiently as possible, we are also assessing how well the system works,” Scott said in the release. “As with every new program, there are going to be unanticipated challenges, the number of kits each household can order will be limited, it could take up to a week for them to be delivered, and we expect that they will go very, very quickly.”

Further details about the state initiative, including how to order the tests, are expected next week.