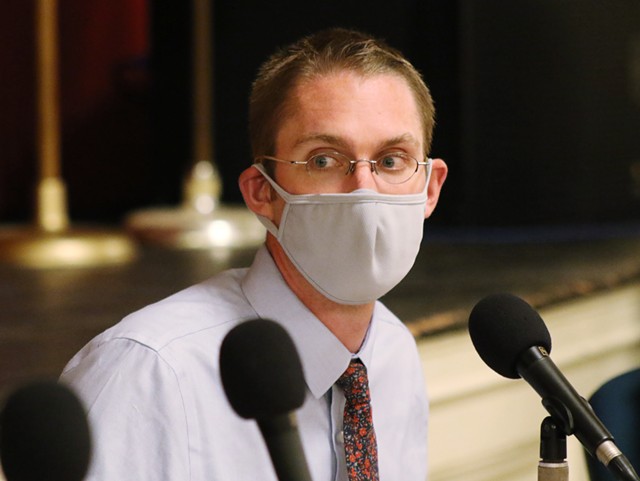 Burlington City Council President Max Tracy (P-Ward 2) said on Thursday that he will not run for reelection in March.

The current council’s longest serving Progressive, Tracy said that it's become too difficult to balance his demanding council role with his full-time work as a health care union organizer, particularly with contract negotiations looming at the University of Vermont Medical Center.

“Serving on the city council as council president, having to run for reelection while also working on the next contract in the spring, seems really untenable,” Tracy said. “I don't think I’d be able to do either role justice.”

Since he was first elected in 2012, Tracy has earned a reputation as one of the council's most hard-line Progs. His uncompromising policy positions — including his votes against basing the F-35 jets in Burlington and support for wide-ranging police reforms — have positioned him as the perfect foil to Mayor Miro Weinberger, a Democrat whose seat Tracy nearly swiped in last year’s mayoral election. The Prog lost by just 129 votes.

Can Max Tracy Ride the City’s Progressive Wave to Become Burlington’s Next Mayor?
By Courtney Lamdin
Politics
Tracy, 35, said his employer allowed him the flexibility to run for mayor last year, but that it would be “incredibly challenging” to mount another campaign as his union work is picking up. Had Tracy run again for council, it would have been his third campaign in as many years.

“Elections are uniquely intense and stressful,” he said. “I don't want to be running every single year, especially on the heels of the years that we’ve had at this point with the pandemic.”

Indeed, Tracy has been at the council’s helm during the entirety of the pandemic, when in-person meetings shifted to remote proceedings. He has moderated myriad debates on divisive issues, including virtually presiding over the city’s longest-ever public forum — on policing — and attempting recently to maintain order when the destruction of a homeless encampment brought raucous crowds to City Hall.

Crowds at Burlington City Council Meetings Are Becoming Increasingly Uncivil
By Courtney Lamdin
Politics
Though Tracy is viewed as the Progs’ figurehead, he said the caucus has “a number of leaders” and he isn’t concerned that his open seat will weaken the Progressive party. Tracy has handily defeated opponents in council elections, cementing the Old North End’s yearslong status as a Progressive stronghold.

Burlington Democrats aren’t running a candidate in Ward 2 in March, when all eight “ward” seats are up for reelection. But the party did put up contenders in other wards. Newcomers Hannah King and Aleczander Stith are running in Wards 8 and 7, respectively, while Ben Traverse is seeking the Ward 5 seat that incumbent Councilor Chip Mason, a Democrat, will vacate. Incumbent Dems Sarah Carpenter (Ward 4) and Karen Paul (Ward 6) are also running.

Bergman, 68, has lived in Burlington for nearly 50 years. He served Ward 2 on the city council from 1986 to 1992 and ran an unsuccessful campaign for the Vermont House in 2012. He retired as assistant city attorney in 2018 after 20 years on the job.

Since then, Bergman has worked as a paid staffer for several Progressive councilors, including Jack Hanson (East District) and Perri Freeman (Central District), performing research and drafting resolutions.

He said people have asked him to run for council over the years, but he always declined due to family obligations. If Tracy had run for reelection, Bergman said he would have pulled his candidacy.  He’s running to “push some really important, transformational policies.”

“Perhaps there's a way I can bridge divides,” Berman said, adding that he knows the players in city politics. “I’m interested, and I care. I love the city, and I love its people.”

Tracy said he won’t endorse a candidate until after the Progs caucus on January 18. Councilor Joe Magee (P-Ward 3) is running again, but both Zoraya Hightower (P-Ward 1) and Jane Stromberg (P-Ward 8) haven’t announced their reelection plans.

At Raucous Meeting, Burlington City Council Passes Mask Mandate
By Courtney Lamdin
Off Message
In a text message Thursday evening, Hightower said she’s conflicted about seeking another term. She said her role as a “compromiser” is critical in policy debates, but the time commitment and “hate messages from across the country” are wearing her down.

“I’ve tried to be clear that I'd prefer to take a break and step away for the right candidate but they've been slow to materialize,” Hightower wrote. “I will decide by next week."

Stromberg did not respond to an interview request.

Tracy said he’s grateful for his decade of service and is not ruling out another run in the future. Meantime, he’ll remain involved with the party and plans to stay in the Queen City.

“It’s been the great joy of my life to be able to serve my community in this way,” he said. "I don't take stepping away from that role lightly. I'm sure I’ll really miss it.”
Prev
Next