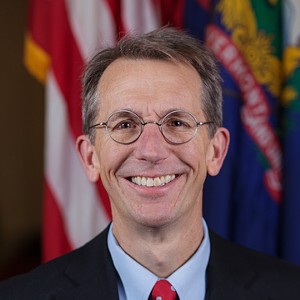 State Rep. Charlie Kimbell (D-Woodstock) on Monday launched his bid for the lieutenant governor’s position, becoming the first of what is expected to be several people to vie for the office.

Kimbell, who is serving his third term in the Vermont House, is a former banker and business owner who has been active in rural economic issues and workforce development. He said he’d like to use the statewide platform of the lieutenant governor’s job to coordinate some of those efforts.

“With workforce development, there are a lot of different silos, in education, labor and other different places where people have different interests,” he said. “I see the role of lieutenant governor as convening those and looking for one path forward.”

With two seats in Congress and the lieutenant governor’s post up for grabs, several other Vermont politicians have announced or are considering runs. Among them are Senate President Pro Tempore Becca Balint (D-Windham), who is making a bid for Welch’s seat, and state Sen. Kesha Ram-Hinsdale (D-Chittenden), who has said she’s considering doing the same.

Kimbell's likely rivals for the lieutenant governor's job include former state representative Kitty Toll, a Democrat from Danville who served in the legislature for 12 years — 10 of them on the powerful House Appropriations Committee — before deciding not to run again in 2020. Toll said she misses working in Montpelier, and is “strongly considering” a run for lieutenant governor.

With billions of federal COVID-19 relief dollars to spend, “Vermont is truly at a crossroads,” Toll said. “How we spend this spend this money, the choices we make, the actions we take, are critical. I believe they are really going to define our future.”

State Sen. Joe Benning (R-Caledonia) said Sunday that he’s thinking of running for lieutenant governor, too, largely because he believes Gray only sought the position last year as a means of reaching higher office.

“It made me sad that somebody was using that position as an obvious stepping stone to someplace else,” said Benning, a lawyer who pledged he'd serve at least two terms if elected.

Leahy’s Retirement Announcement Sets Off a Scramble to Succeed Him
By Kevin McCallum and Derek Brouwer
Politics
David Zuckerman, who served two terms as lieutenant governor before making a bid for governor in 2020, said he’s thinking of running for Gray’s position, too. He’s not repeating his race for the top position because he expects Gov. Phil Scott to run again, and doesn’t think it would be possible for him to beat Scott.

“I do think there needs to be a progressive, with a small 'p,' voice in our state offices, and of the candidates likely running at this point, that is not strongly represented,” said Zuckerman, a farmer in Hinesburg. “I would bring that to the office.”

Kimbell, 57, spent his childhood in St. Albans as the youngest of eight children. He graduated from Woodstock Union High School,  where he met his wife. The couple’s three children, now grown, all graduated from WUHS too.  Kimbell attended the University of Vermont, where he was on the ski team, and said he’s had five different professions, including owning a retail store in Woodstock. He’s now director of sales and marketing for MISys Manufacturing, a Woodstock software company where he has worked for nearly 10 years.

The lieutenant governor’s role is usually a limited one, though it becomes much more significant if the sitting governor must leave office for any reason. The lieutenant governor presides over the Vermont Senate, and can cast tie-breaking votes there, and also plays a role in legislative committee appointments.

The job is also a way for the office-holders to get their name out to a statewide constituency, something Gray has been doing with public policy events since she took office last year.

With so many members expected to be campaigning , “the Vermont state Senate is going to be an interesting place this season,” said Bert Johnson, who teaches political science at Middlebury College. “They may be on their way out, and they may have an incentive to get some stuff done quicker than they otherwise would so they can get ready for the fall campaign.”

The lieutenant governor job is often viewed as a stepping stone to the governor’s position. Gov. Scott served three terms as LG before he was elected governor in 2016.

But Kimbell said he doesn’t have that in mind, at least not immediately.

“I’m really looking at the office of lieutenant governor,” he said. “You have to be prepared to be governor in case something happens to the governor, but I am not running with the intent of throwing my hat in the ring for the next election cycle.”
Prev
Next