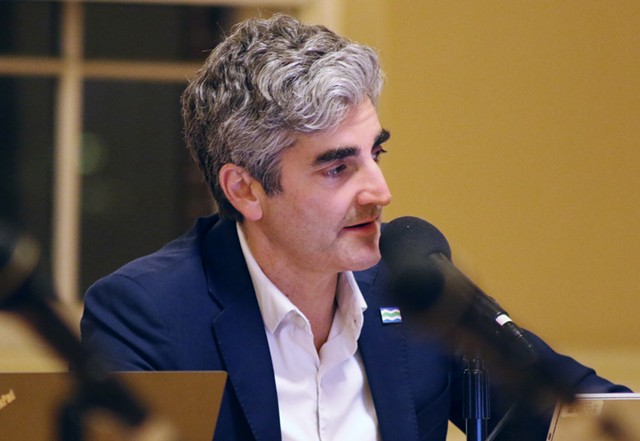 After a contentious debate on Monday, Burlington city councilors agreed to hire a search firm to help find a new police chief — a step that Mayor Miro Weinberger had demanded amid a stalled process that turned up just two viable candidates.

The vote was just one of many on a packed city council agenda, which also included deliberations on short-term rentals, overdose-prevention sites, property tax relief and more.

The police chief resolution says the city will allocate $75,000 toward hiring a firm, which will work with a city search committee to identify a finalist by March 2022. The measure passed on a narrow 6-5 margin that fell on party lines, with independent Councilor Ali Dieng (Ward 7) joining five Progressives in favor. Councilor Perri Freeman (P-Central District) was absent.

Weinberger called the resolution "extremely disappointing." In a November memo, the mayor had also said the council should offer a higher salary range for the position; hire a recruiter and public information officer for the department; and allow the new chief to maintain authority over officer discipline.

Weinberger Wants Burlington Council to Beef Up Police Chief Search
By Courtney Lamdin
Off Message
But the Progs wouldn’t budge.

“It is very problematic and disrespectful to the people of Burlington who have serious concerns about public safety and are basically just being played games with here,” Weinberger said.

The city has been without a permanent police chief since December 2019, when former chief Brandon del Pozo resigned amid a social media scandal. The current acting chief, Jon Murad, is one of the city's two finalists; Weinberger has not named the other.

It’s unclear if Weinberger will let the council's pared-down search plan come to pass. In his original memo, Weinberger said he would appoint either Murad or the other finalist if councilors didn’t approve his multi-pronged ultimatum. He repeated that Monday, saying that the resolution was “nonresponsive” to his request.

“I will be moving forward as laid out in my memo regardless of what council action happens here,” the mayor said.

During the debate Monday, Progressive councilors were unwilling to compromise on the police discipline item. The six-member caucus, with support from Dieng, voted last year to create a citizen-led oversight board that would discipline officers, removing the chief’s ability to have the final say. But Weinberger vetoed the proposal before voters could have their say.

Councilor Karen Paul (D-Ward 6), who serves on the search committee, attempted to broker a compromise that would have offered higher pay and committed to hiring a public information officer — a position that was already recommended by an independent consultant — in exchange for Weinberger foregoing his other demands.

But while some Progressive councilors expressed a willingness to offer a higher salary, none offered to include it in Monday's vote. The resolution does leave open the possibility of upping the salary if the search firm decides that the advertised range of $119,000 to $133,000 is too low.

Weinberger has said that “multiple prospects” and a police nonprofit have already told the city that the offer is too low to be competitive. Paul chided the Progs for seemingly ignoring the experts’ advice.

“People who have done dozens of searches … are telling us that we need to increase the salary,” Paul said. “And yet it seems as though other people know better.”

Councilor Joan Shannon (D-South District) suggested that the council shouldn’t hire a search firm at all, noting that the city already has two finalists.

Earlier in the meeting, councilors voted to move forward with a restrictive set of regulations for short-term rentals, though the rules won't be finalized until after a public hearing early next year.

City planners gave councilors two choices for how to manage short-term units. The first option would allow hosts to rent out their primary dwelling, or another unit they owned in the same building or on the same lot.

The second option, which councilors advanced to the public hearing, is stricter: Hosts could only rent out their primary residence — including a bedroom within a home — but not any other units, even in the same building.

For years, officials have debated how to manage the city’s supply of short-term rentals, available on websites such as Airbnb and Vrbo. Their use cuts into the already lacking long-term housing supply. But hosts have lobbied against proposed changes, arguing that the city would be taking away a needed source of income that many use to pay their own property taxes.

Beds & Burlington: The City Grapples With Regulating Airbnbs
By Molly Walsh
City
Councilor Shannon is in favor of the stricter ordinance. On Monday, she said the city can’t continue losing permanent housing stock to short-term rentals. “Every unit that converts [to a short-term rental] is a unit denied to someone seeking housing,” Shannon said.

Councilor Jack Hanson (P-East District) agreed, saying that people operating short-term rentals make good money at the expense of others who can't find housing. Mayor Weinberger, who announced a slate of housing reforms last week to combat the city’s housing crunch, said “it is very challenging to justify anything other than a very restrictive policy here.”

The debate paused momentarily when councilors acknowledged a letter from an attorney representing the Vermont Short-Term Rental Alliance, a statewide organization of hundreds of rental hosts, that appeared to threaten legal action if the proposed ordinance passed. Councilors continued deliberation after a brief executive session.

Councilor Chip Mason (D-Ward 5) warned his fellow councilors that the number of short-term rentals would "drop precipitously" if they approved the plan. Mason said this happened in Portland, Maine, and that his attempts to book a short-term rental there this fall were foiled due to lacking supply.

"The only available options were a hotel, which was $600 a night," Mason said. "I hope I'm wrong, but I don't know that this is not going to have the same unintended consequences if we fully ratchet down as much as this proposal does."

Councilors also heard a report about the possibility of an overdose-prevention site in Burlington. People can safely use drugs at such a facility under the supervision of trained professionals.

Along with overdose reversal services, the facility should offer drug-testing supplies, basic first aid and referrals to treatment services, city researchers said. The report estimates that about 100 people per week would use the facility, which would need at least four staff members on-site when open.

As Opioid Deaths Surge, Advocates Push for Overdose-Prevention Site in Burlington
By Courtney Lamdin
Health Care
The report does not suggest locations for the site or estimate how much it would cost to operate. Rather, it recommends a prevention site open near “overdose hotspots," such as downtown, or where people who use drugs already receive services.

The findings are the city’s first look at how an overdose-prevention site might operate in Burlington, and comes as fatal overdoses have surged in Vermont during the pandemic. The council ordered up the report last fall, but it was delayed when the lead researcher left for a new job.

Advocates have long pushed for such a site, but concerns over their legality have hampered previous discussions — particularly in 2017, when former U.S. attorney Christina Nolan announced she would prosecute any organization that operated one.

The political winds have changed since then. Last month, the federal Department for Health & Human Services published a report condoning overdose-prevention sites as a strategy to address the opioid epidemic. President Joe Biden has also appointed a new U.S. attorney for Vermont, Nikolas Kerest, though he has declined Seven Days’ interview requests on the topic.

“The only reason that we've been able to save people, every single one of those times, is luck,” Keller said.

Jess Kirby, a case manager at Safe Recovery who is in recovery, told councilors that prevention sites can provide a safe alternative to using alone.

“Working in harm reduction every day with people who are most at risk for overdose, it really does feel like we're really behind right now, and that this is one thing that we know could save lives,” Kirby said, adding that people “need this in Vermont.”

Marielle Matthews, the city’s public health equity manager, said that despite the progress on the federal level, Burlington could still face barriers to opening a prevention site because the state legislature hasn’t tackled the issue. The city may struggle to find a community partner to operate the site without tacit approval from lawmakers, she said.

Councilors didn’t vote but expressed support for the concept. Ed Baker, an advocate for overdose-prevention sites, closed the discussion by encouraging councilors to discuss the topic with community members to help reduce stigma.

“This should be something that we're talking about, educating people about,” Baker said. “The idea is to get this on the table, get it into the cultural consciousness, so we can take a look at it [and] make some decisions about it.”

In a related agenda item, councilors unanimously agreed that the city should join two proposed settlements with opioid manufacturers and distributors. The vote means that Burlington will receive a portion of the national $12 billion settlement with Johnson & Johnson, and part of a $21 billion agreement with McKesson, Cardinal and Amerisource Bergen.

The cash infusion is a continuation of a program the city started this fall, after most homeowners faced higher tax bills following a citywide reappraisal. Residents learned, after receiving their bills, that their state education tax rebate wouldn’t offer commensurate relief.

Watch the full meeting below, courtesy of Town Meeting TV: