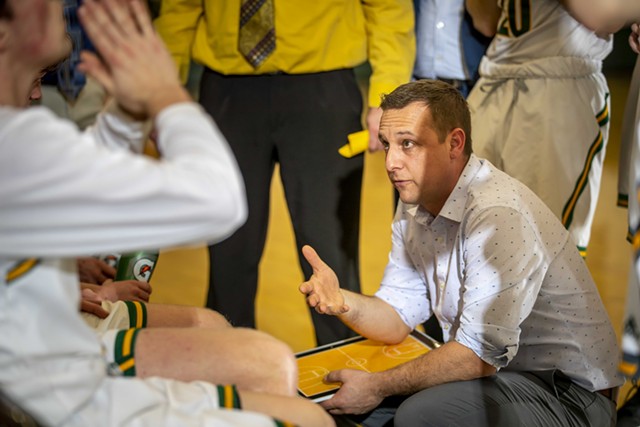 Georgia Elementary & Middle School teacher Matthew Toof has been charged with sexual assault, stemming from allegations that he repeatedly raped and molested a former student over the course of more than five years, starting when she was 11 years old.

Toof, who is listed as a middle school literacy teacher on the school's website, is facing two charges — repeated aggravated sexual assault of a child, and lewd and lascivious conduct with a child. After being arraigned on Thursday, he was being held without bail at Northwestern Correctional Center.


A criminal affidavit from the Franklin County Sheriff's Office details accusations of repeated abuse, which allegedly began in Toof's sixth-grade classroom in April 2016. Later that spring, teachers in the school became suspicious about the relationship between Toof and the girl after witnesses spotted them spending time together, holding hands and embracing.


But the agency said it didn't follow up on the report because the concerns did not meet the criteria for sexual abuse. That same month, Toof stuck his hands down the girl's pants in his classroom, she told police.

On November 18, 2016 — just five months later — a social studies and language arts teacher at the school filed another report with DCF. She reported hearing the school administration expressing concern about Toof's behavior toward the student, who was no longer in his class.

Staff had been advised "to keep an eye" on the girl and not allow her to visit Toof's classroom because there had been "a previous incident of concern about his behavior with this child," court documents say. Earlier that month, Toof had been observed holding hands and hugging the student, the teacher reported. Again, DCF declined to investigate further.

DCF did not immediately respond to an emailed request for comment from Seven Days.

On Tuesday, Det. Sgt. Mark Lauer of the Franklin County Sheriff's Department interviewed the accuser, who is now 17 and still a minor. She detailed years of assault by Toof, starting with an incident in April 2016 in which he stuck his hand down her pants while other students were in the classroom. She said that Toof continued to assault her in school that year. Toof "was full on grooming me!" she told police, according to the affidavit.

The accuser estimated that Toof put his hands down her pants approximately 100 times. The assaults escalated when the girl turned 14. Toof allegedly raped the girl that year. After the first time, he asked her, "Did it bother you?"

He raped her again multiple times, she said. The last time she saw Toof, earlier this fall, he showed up to her house and exposed himself, she recounted. The girl said she asked Toof "how he could do this to me for six years."

"He looked me dead in the eye and he said, 'Do what?'" the teen said, according to the affidavit. "That is what got me... I just could not do this anymore."

In response to a question from the police about what she wanted to see happen to Toof, the girl replied: "I want him locked up. I wish I could shake my 11-year-old self."


In an emailed statement, Franklin West Supervisory Union interim superintendent John Tague said the school district learned of the allegations on Wednesday. His statement did not specifically name Toof or further explain the teacher's status at the school.

"At this time, we are unaware of any other sexual misconduct by the teacher or any other [Georgia] employees," the statement continues. "We will be cooperating with law enforcement and supporting our children and families. Student safety is always the District’s highest priority.

"Since this is a personnel matter, we cannot discuss the specifics of the charges against the employee," the statement said. "Generally, when there is notice to the District of abuse, the District responds immediately. We maintain and enforce strict policies against sexual misconduct. Where there is notice of behavior that could be abuse, we report it to DCF and the Agency of Education.

"We also remove any employees accused of that kind of misconduct from the workplace until the matter has been fully investigated. Where there is substantiation of abuse, we will always terminate the employee. We will not tolerate sexual abuse of children by our employees."


In addition to being a teacher, Toof was formerly a boys varsity basketball coach at BFA St. Albans. Toof resigned from that position this fall, Maple Run Unified School District superintendent Bill Kimball wrote in an email to Seven Days.

December 11, 2021: Several details have been stricken from this story for privacy concerns.
Prev
Next