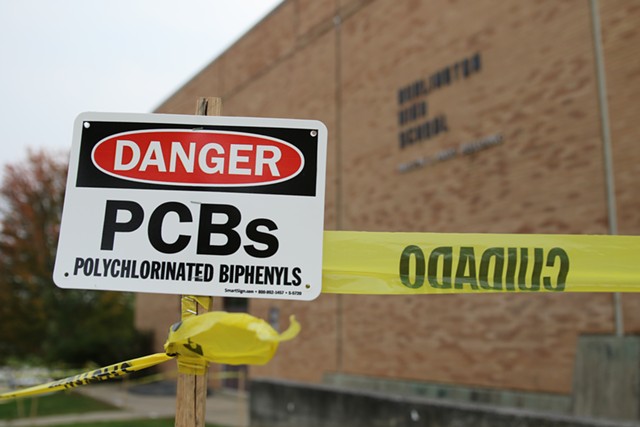 "I still believe with the information that I have that that's the right decision for us," Flanagan said. "I understand it is a harder decision now after the new action levels ... but I think we are not in a significantly different place than we were five months ago as it relates to our need for a new building."


The school board voted last month to build a new high school on the existing Institute Road campus, a nine-figure project Flanagan has said he hopes to complete by August 2025.

"One of my biggest concerns has been hurdles like the one we are facing now get in the way and delay the inevitable need for a new school building for Burlington High School and Burlington Technical Center," he added.


In mid-November, the Vermont Department of Health quietly posted new "action levels" for PCBs in indoor school air that are significantly higher than the 15 nanograms per cubic meter screening level the state previously used.

The new guidance says schools should do more testing if they detect airborne PCBs above 100 nanograms per cubic meter in high- and middle-school buildings. The number is 60 nanograms for grades K-6 and 30 for prekindergarten rooms.


Flanagan said on Tuesday that 30 percent of classrooms first tested on the high school campus had PCB levels at or above 100 nanograms per cubic meter. Additionally, the new action levels do not cover materials that contain PCBs — such as concrete walls and flooring, ceiling tiles and soil  — that would still need to be removed under guidelines from the U.S. Environmental Protection Agency and state Department of Environmental Conservation.

Vermont Relaxes PCB Standards, But Impact on Burlington School Project Unclear
By Alison Novak
Off Message
"What we know about that is it's costly to remediate and will require consistent and ongoing remediation for the length of the building's life," Flanagan said. Furthermore, he added, the F building, which once housed tech center programs, contains far higher levels of airborne PCBs, making it uninhabitable.

Flanagan said that he's asked the district's environmental consultants, Atlas Technical Consultants and Fuss & O'Neill, to review the state's new guidance and provide "a formal written opinion" on whether the district could now use more of the campus. Currently, the A building is being used on a limited basis.

In the meantime, the district has chosen three architectural firms as finalists for the job of designing a new high school and tech center. Flanagan plans to recommend one and put it to a vote at the board's next meeting on December 14.


Commissioner Mike Fisher said that he understood the need to make progress on planning for a new school, "but we're talking big dollars and big impact to our taxpayers, so I think we all have a fiduciary responsibility to make sure that we find out as much as we can about how much of that old campus is habitable or reusable."

Related Burlington’s PCB Problem Could Impact Other Schools Across Vermont

Burlington’s PCB Problem Could Impact Other Schools Across Vermont
By Alison Novak
Education
Some answers appear elusive. The district sent state agencies a list of written questions about the new action levels but have yet to hear back, even though the responses were expected by December 3, according to school board chair Clare Wool.

Other commissioners took issue with how state officials' characterized the situation at the high school when the PCBs were first discovered last fall.

"I'm hoping the state, whoever these regulators are at the various agencies ... have the courage to let us know, in clear and simple terms, what they will require or not require," school commissioner Jeff Wick said. "Because I was not pleased with the reporting in Seven Days where the state indicated that it almost seemed somewhat whimsical that we decided to close BHS down, when in fact — let the record be set straight — that the state told us that we could not go back in there, that it was above 15 nanograms per cubic meter, and we were left with zero choice. "

Parents Who Wanted Burlington High School Open Feel Vindicated by New PCB Guidance
By Alison Novak
Education
Wick said that if parts of the Institute Road campus were deemed safe, high school students could possibly return there and the downtown high school could be used as a "swing space" for younger students while other district schools completed capital improvement projects.


Earlier in the meeting, the board discussed the possibility of financial compensation for school board commissioners. They are not currently paid, which creates a barrier for some potential candidates, Commissioner Fisher said. Wool, the board chair, noted that Burlington city councilors are paid $5,000 annually and recently voted to study the possibility of a raise. Wool said other school boards in Chittenden County pay members between $500 to $1,700 annually.

Commissioner Polly Vanderputten said she did not favor the change.

"I feel the school board occupies a very unique place, that while we are elected officials, there's something about our role that mandates that we be somewhat neutral and apolitical, and in order to truly and properly do that, I don't think there should be compensation involved," Vanderputten said. "I worry about people lobbying for special interests when it comes to education and curriculum if they know that school board members are receiving compensation."

No vote was taken on the issue.
Prev
Next