The Essex Planning Commission on Thursday rejected a proposal by Rick Bove to build 60 more rental units at the Essex Town Center, citing health and safety violations at his existing buildings there.

Commissioners denied Bove’s proposal unanimously, following the recommendation of Essex town officials who have been tussling with Bove over overflowing dumpsters at the property for the last four years. One commissioner, Ned Daly, recused himself because he has a relationship with Bove.

Bove’s mismanagement of his Vermont rental empire, including at the Essex Town Center, was the subject of a joint investigation published earlier this month by Seven Days and Vermont Public Radio. The news outlets found that maintenance needs have been neglected across the 400-plus rentals that Rick and his brother, Mark, own in several communities, leaving low-income tenants to live in substandard conditions.

The Bove brothers already own a mixed-use portion of the Essex Town Center near the intersection of Upper Main Street and Route 289. One of the complexes, the Whittier Building, had been constructed by a different developer using public subsidies, with 26 of its 44 units subject to affordability requirements. Earlier this year, Bove submitted plans to construct three new buildings of mostly market-rate, one-bedroom apartments and some commercial space.

“I have never, in my recollection of the time I’ve been on this commission, had so clear a statement and direct a statement,” commission chair Dustin Bruso said of the town staff's recommendation. The planning commission held its first hearing in June but did not vote on the proposal’s merits. At a follow-up hearing on Thursday, Bove’s engineers with O’Leary-Burke Civil Associates presented a revised plan that included an agreement to add commercial space to one of the buildings and construct the first phase of an envisioned town green. They did not address their client’s code compliance issues at the adjacent property. Rick Bove attended the hearing but did not speak.

During public comment, however, a longtime resident of the Whittier Building described a litany of problems at the property since the Bove family bought it. Traci Rochester and her daughter, Taylor, detailed broken doors, malfunctioning heating systems, “unusable” laundry facilities and leaky ceilings that destroyed their belongings.

“I just feel we’re being treated as a rent check, rather than humans,” Traci said.

She trembled as she addressed the commission, explaining that she feared her landlord, who was seated behind her, would retaliate against her for speaking out. “I think that Rick needs to take care of what he already has before he builds anything else,” she said. 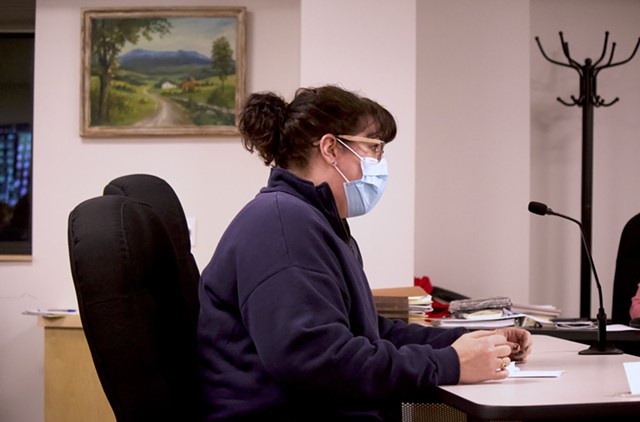 Representatives from the Essex Housing Commission, a recently formed advisory board for the town and village, and the Essex Economic Development Commission also testified in opposition to Bove’s project. Housing Commission chair Katie Ballard urged the planning commissioners to consider renters’ quality of life in their decision making.

Bove representative Paul O’Leary told commissioners that he felt his client had been “shanghai’ed” because he was not invited to attend other board meetings where the project was discussed. He characterized the Essex town staff report on Bove's project as “very negative.”

At one point, O’Leary implied that Bove may raise rents at the Whittier Building if the town didn’t approve his proposed development. Essex allows developers who build affordable housing to build more densely packed projects; Bove wanted his existing affordable units at the Essex Town Center to count towards the proposed buildings.

“If we’re not going to get any credit for having affordable housing and get a bonus, then there’s very little reason for Mr. Bove to continue to maintain these as affordable housing,” O’Leary said. He later clarified to the commission what he meant: “There’s a possibility that we would investigate whether or not we would be better off to turn those into market rate.”

That was a different tone than the one taken a week earlier by Rick’s brother and business partner, Mark. Following Seven Days and VPR's reporting, Mark Bove issued a press release stating that the family takes responsibility for the conditions at its buildings and pledged “immediate corrective action.”

“We have worked hard to try to provide a clean and safe place for every tenants [sic] regardless of income, race, or gender.” the press release stated. “Where we have fallen short, we are working to do the right thing.”

Traci Rochester, the Whittier resident, told commissioners Thursday night that some of the issues at her building had been addressed since the news organizations published their investigation on November 3. Her daughter, Taylor, however, urged town officials to remain vigilant when dealing with Rick Bove.

“He's going to go back to his old ways the second people stop actively caring,” she said.