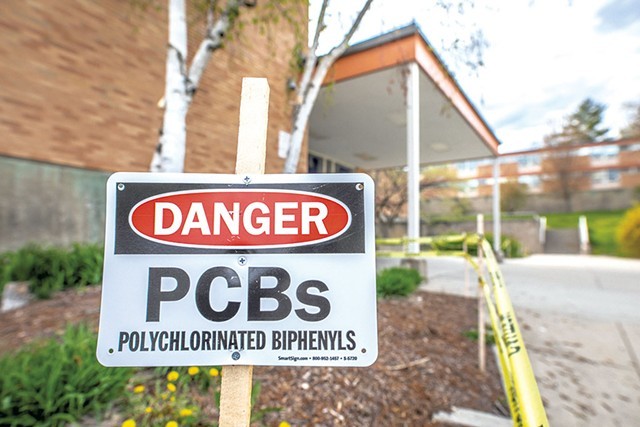 The Vermont Department of Health has quietly updated the way it assesses airborne levels of cancer-causing chemicals, a decision that comes ahead of a statewide testing program for hundreds of schools across the state.

The newly created "action levels" are significantly higher than the "screening level" the state has previously used to flag excessive amounts of polychlorinated biphenyls (PCBs) in indoor air. Burlington High School decided to shut its doors after testing last year showed levels above the state's threshold of 15 nanograms per cubic meter, along with extensive PCB contamination in building materials.

But the new action levels are 100 nanograms per cubic meter for high school buildings, a level not exceeded by most of the classrooms at Burlington High School's Institute Road campus. Last school year, district officials decided to forgo $70 million in renovations that voters approved and recently decided to build a new school. It is unclear whether the state’s decision will impact this plan.

Superintendent Tom Flanagan did not respond to a request for comment about the new guidance, nor did School Board chair Clare Wool. The district's communication specialist, Russ Elek, said last week that the district had not heard anything from the Department of Health about the new PCB action levels.

Burlington School Board Votes to Build New High School on Old Campus
By Alison Novak
Off Message
PCBs were commonly used in school building materials — such as caulk, flooring adhesive and lighting ballasts — before being outlawed in 1979. After Burlington discovered widespread contamination and closed its high school in September 2020, the legislature passed a measure that allocates $4.5 million to test for PCBs in schools statewide. Gov. Phil Scott signed Act 74 in June and testing is expected to begin this school year.

The new state guidance on PCB levels, released Tuesday, notes that 15 nanograms per cubic meter "is close to the background PCB concentrations in air" and therefore could "result in frequent exceedances" during the statewide testing. Of the approximately 450 school buildings in the state, “a good portion” of them were built before 1980, and therefore will be eligible for testing, according to state toxicologist Sarah Vose.

Vermont's new action levels would still be significantly more restrictive than federal standards. The Environmental Protection Agency guidelines are 500 to 600 nanograms per cubic meter for high school-age students and staff. The state previously used only the 15 nanogram screening level; the "action levels" are an entirely new construct.

The 15 nanogram screening level was far lower than any other state in the country. Vose previously said the low level is meant to lessen exposure to the chemicals by taking into account both cancer risks and noncancerous health effects of PCBs.

Related Burlington’s PCB Problem Could Impact Other Schools Across Vermont

Burlington’s PCB Problem Could Impact Other Schools Across Vermont
By Alison Novak
Education
But many experts who spoke to Seven Days thought the level was way too low, and some Burlington parents complained that the district was being too cautious. Data scientist Greg Fanslow, who once worked as a water-quality regulator, said the level "creates huge other consequences for the economy and society."


Vose said that when the screening level of 15 nanograms per cubic meter was calculated eight years ago, the Department of Health and Department of Environmental Conservation didn't consider that it is "pretty common" to find low levels of PCBs — around 10 to 15 nanograms — in indoor air, even when there isn't a nearby source of PCBs.

After the original screening level was set in 2013, Vose said the Department of Health didn't revisit it from year to year.

"Now that there's a program with several hundred schools to be tested, that's what sort of brought this more into focus," Vose said.

Lawmakers Pass Historic $7.3 Billion Budget Laden With Stimulus Funds
By Kevin McCallum
Off Message
Trish Coppolino, senior environmental program manager at the state Department of Environmental Conservation, said the state told Burlington officials and district consultants last year that they had the option of doing  a more detailed PCB assessment before making a decision to abandon the school. Coppolino said the consultants chose not to do this.

"The school made their own decisions on the path that they wanted to take," Coppolino said.

Elek confirmed Coppolino's account, noting that Burlington officials felt they "were facing the potential of spending valuable time and money on experiments, leaving us with a building without any substantive learning environment upgrades and little assurance that the remaining PBC levels would be below the state guidelines," which, at that time, were still 15 nanograms. That led Flanagan in May to recommend ending the renovation project.

Coppolino said that her agency was recently given oversight over PCBs in indoor air. Before last spring, Coppolino said, the EPA was in charge of regulating PCB levels — though Coppolino noted that the federal agency would typically defer to states that had a different calculation of risk, as Vermont did.

Burlington's school board has already voted to abandon its contaminated school and build a new one, though the process is in the early stages. Testing in summer 2020 ahead of a planned $70 million renovation found levels in the thousands of nanograms per cubic meter in the F building, which housed the technical center.


Further testing in the other five high school buildings found much lower PCB levels: between one and 300 nanograms per cubic meter, with an average of 98 nanograms. Of 40 rooms tested in those five buildings, 28 were below 100 nanograms, while two were exactly 100. Three others were between 260 and 300. The remaining seven rooms were between 110 and 170 nanograms.


Superintendent Flanagan told Seven Days in May that officials from the EPA and Vermont Department of Health said last fall that it would be necessary to keep the school closed because the PCB numbers on campus were above the state’s screening values — coupled with the high levels of PCBs in Building F and the fluctuations of PCB levels in other parts of the campus.

This March, the district opened a temporary high school inside a former Macy's department store downtown.

Burlington High School Opens Downtown Campus in Former Macy's
By Alison Novak
Off Message
After more PCBs were found in building materials throughout the high school, the school district decided to abandon the contaminated school and instead build a new one. The city school board voted earlier this month to build next to the PCB-contaminated school on Institute Road, with the intention of putting a bond to voters in November 2022 to raise funds for the project.

Both Vose and Coppolino cautioned against second-guessing Burlington's decision.


“I just don’t want it to seem like it’s something that’s a game changer for the City of Burlington because they still have a lot of high-PCB-containing building materials in their school that need to be addressed, regardless of [changing guidance],” Coppolino said. “They still have a lot of work to do if they wanted to reuse the building.”

But Keri Hornbuckle, a University of Iowa professor who has researched PCBs for decades, noted in May that the decision would have a ripple effect.


"The situation in Burlington is so alarming because it's not an unreasonable decision, but it's completely unaffordable," she said. "The whole country can't replace all of our schools that were built [before 1980], can we?"

Hornbuckle said in May that airborne PCBs can be remediated using a "targeted materials approach." That means removing or replacing the chemical source, such as light ballasts and window caulking.

After reviewing the new state guidance this week, Hornbuckle said she could tell "a lot of thought went into the decision."

"The state is clearly thinking about how to protect children and making a plan to do so," she wrote in an email.

Hornbuckle added that setting action levels, in addition to the conservative screening level, is a more realistic approach for addressing PCB contamination in schools.

"Vermont seems to have a plan for reducing exposures to PCBs by identifying levels that link to a priority for action. That is valuable," she wrote. "This is not the same as setting levels that are not toxic or harmful."
Prev
Next