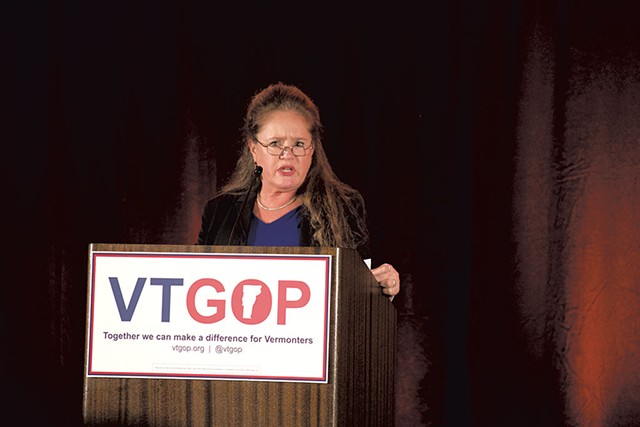 Deb Billado, the oft-embattled chair of the Vermont Republican Party, will not seek another term when her post comes up for election next month.

Vermont Daily Chronicle, an online media outlet, broke the news on Thursday, reporting that Billado was stepping away from the unpaid position so she could focus on a new job.

“I have committed 40 to 60 hours a week for this position for four years,” Billado told the outlet. “With new job responsibilities, I am no longer able to give the time and dedication this political job requires.”

The article did not reveal her new gig, and Billado did not respond to requests for comment on Thursday. The state party plans to elect a new chair at a November 6 meeting in Montpelier.

An Essex Junction businesswoman, Billado was first elected to lead the state GOP in 2017, defeating a candidate backed by Gov. Phil Scott, a moderate Republican who is not a supporter of former president Donald Trump. That victory set the tone for much of her tenure.

She remained an ardent supporter of Trump throughout his term, parroting MAGA talking points in email blasts and newsletters while placing herself at odds with more moderate members of the state party.

Related Strife Is Evident in Vermont’s Political Parties, but They Still Have an Important Role

Strife Is Evident in Vermont’s Political Parties, but They Still Have an Important Role
By Dave Gram
Fair Game
Scott publicly criticized her on more than one occasion, while some GOP state lawmakers accused her of making it harder for them to distinguish themselves from the national scene. Some stopped seeking support from the state party altogether.

Billado nevertheless sounded an optimistic note in her farewell, implying that she believed she had left the party in a stronger position than she found it.

“There are so many wonderful people in the party, and I hope that we continue to grow and flourish moving into 2022,” Billado told the Chronicle. “I believe the GOP will succeed in gaining more seats in 2022.”
Prev
Next