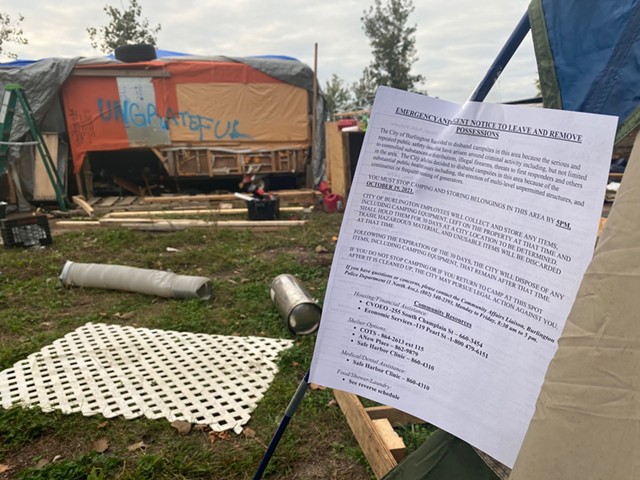 Burlington Mayor Miro Weinberger directed city police on Thursday to clear out a long-established homeless encampment in the South End following arrests there this week.

Residents have until 5 p.m. on October 19 to vacate the Sears Lane site, which has been on city land for years. Eviction notices scattered around the lot warn of legal action if people remain or return after it's cleaned up.

Police made two arrests at the camp on Wednesday. One person was cited for drug trafficking, and another for threatening firefighters with a weapon. The "serious criminal activity" and "hostile threat" required immediate action, Weinberger said, noting that prior to Wednesday, the city had been working to establish housing options for its residents.

"In attempting to generate new, needed housing the City’s intent was never to protect criminal activity," the mayor said. "It is clear that the encampment at Sears Lane has become untenable and unacceptable.”

Burlington police responded to the campsite on Wednesday morning following a monthlong drug investigation with federal authorities. They arrested a 49-year-old houseless man after a search warrant turned up "methamphetamine, several weapons, and stolen property," a press release said.

Later that day, a man pointed what police described as an "AR-style" rifle at city firefighters who had gone to the camp for a medical call. The firefighters left with the patient in an ambulance, and police cited a 30-year-old Burlington man for simple assault. The rifle turned out to be a replica pellet gun.

The city's eviction notice references these incidents and also "substantial public health issues, including the erection of multi-level unpermitted structures, and continuous or frequent running of generators." 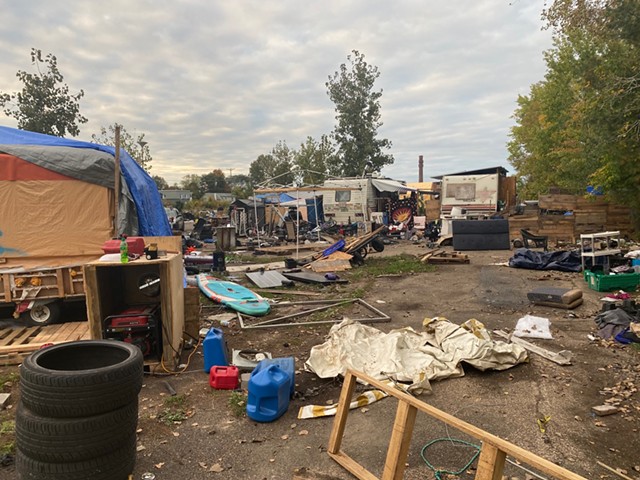 At the sprawling encampment Thursday evening, several people wandered around. A noisy generator hammered away.

Trash littered the site, which is located off Pine Street. It abuts train tracks and the adjacent Burlington Bike Path, near the Lakeside neighborhood. Empty motor oil bottles, gas canisters and propane tanks were visible, as were wooden pallets, tarps and tires. A go-kart sat unused, next to a few lawn mowers. Tool boxes were scattered about.

One man said residents had heard of the impending eviction. He didn’t know where he’d go.

Of living there, he said, “We don’t have much of a choice.” He didn’t give his name. “There’s nowhere else to go. Everybody’s homeless.” Asked how many people live there, he answered, "Quite a few."

Related Kicked to the Curb: After a Year in Hotels, Homeless Vermonters Prepare to Live in Tents and Cars

Kicked to the Curb: After a Year in Hotels, Homeless Vermonters Prepare to Live in Tents and Cars
By Chelsea Edgar
Coronavirus
The city has long debated how to manage the Sears Lane encampment. Last summer, it proposed building a low-barrier shelter out of converted shipping containers on the site, which would have been managed by ANEW Place. Its request for $1.3 million in coronavirus relief funds was denied, and ANEW Place now runs a 50-bed shelter in the former Champlain Inn on Shelburne Road.

This fall, the city issued a request for proposals to manage the Sears Lane camp, but it garnered no response, WCAX-TV reported earlier this week.

The city broke up the encampment almost exactly four years ago, in October 2017, citing concerns over belongings that had accumulated there. Shortly afterward, the American Civil Liberties Union of Vermont sued the city on behalf of a man who had been camping at a site on North Avenue, whose possessions the city had twice trashed. The ACLU alleged that the city violated campers' constitutional rights when it dismantled the sites without due process.

Pop-Up Campers: As a City Policy Rewrite Stalls, the Homeless Pitch Tents
By Courtney Lamdin
City
The lawsuit ended in a $25,000 settlement and a new homeless encampment policy, which requires the city to provide residents with a written notice to vacate that outlines why the shelter will be removed. It also spells out a process for campers to object to eviction and requires the city to store abandoned items for at least 30 days.

In November 2019, the city dismantled a mini-encampment that had sprung up next to City Hall during the nearby park's renovation — an effort one camper described then as a way to "get rid of homeless people" who frequent the green space. Someone had complained about the campsite using the code enforcement website SeeClickFix.


Stephen Marshall, a longtime advocate for the city's unhoused population who formerly camped at Sears Lane, said Weinberger had "resisted political pressure to close the camp" until Thursday. Marshall said residents he spoke with earlier in the day had two primary concerns.

"One is that the five-day window is way too small and completely unreasonable," he said of the time between notice and eviction. "The other is there are a lot of innocent people being hurt by this precipitous decision."

Marshall will meet with campers in the coming days. "My next step is to support whatever it takes to deliver those messages [to the mayor]," he said.

"The city had plans to offer social services to them ... but after the raid the other day, the city decided that their lives weren't important anymore and that their existence at the camp isn't worth it at all," said the statement, which was posted on Instagram. "These are real people's lives, and the city just said fuck you to all of them."

The city's list of social services, which was included in the eviction notice, won't help every camper because "many fall through the cracks," the group said.