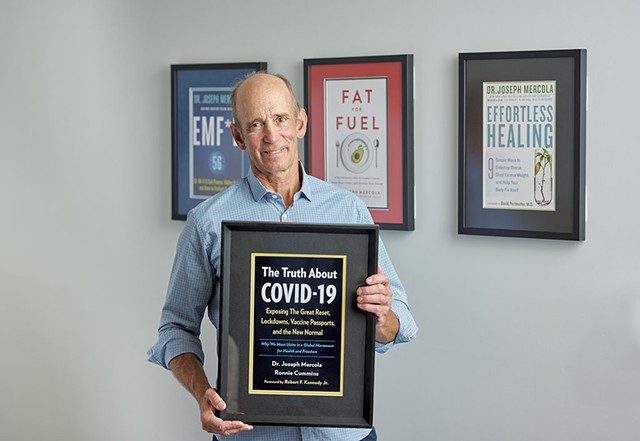 The Vermont publishing house and Mercola, an osteopath and prolific disseminator of COVID-19 misinformation, were the subject of a September 27 Seven Days cover story. Coauthor of a best-selling book, Mercola also had half a million followers on his YouTube channel, according to the New York Times.

YouTube announced the decision in a blog post Wednesday, writing that while vaccines have been "a source of fierce debate" for years, the coronavirus era has called for stronger policies. The media company said it had already removed more than 130,000 videos for violating its COVID-19 vaccine policies.

Vermont Publishing House Chelsea Green Is Peddling Coronavirus Misinformation
By Chelsea Edgar
Business
"We’ve steadily seen false claims about the coronavirus vaccines spill over into misinformation about vaccines in general, and we're now at a point where it's more important than ever to expand the work we started with COVID-19 to other vaccines," the statement said.

Now-banned content includes videos alleging that approved vaccines don't reduce the transmission of disease, and that they can cause chronic health effects such as autism and cancer.

Mercola is a chief peddler of such falsehoods, including in his latest book, The Truth About COVID-19: Exposing the Great Reset, Lockdowns, Vaccine Passports, and the New Normal, published by Chelsea Green in April. In the text, Mercola says that COVID-19 was engineered as a bioweapon and leaked deliberately, and that the vaccine is deadlier than the virus itself.

The tome is one of Chelsea Green's best-selling titles yet. Robert F. Kennedy Jr., another prominent anti-vaccine advocate who also was banned by YouTube, wrote the book's foreword.

Related From the Publisher: Stopping the Spread

From the Publisher: Stopping the Spread
By Paula Routly
From the Publisher
Chelsea Green, an employee-owned publishing house in White River Junction, has earned a cult following for its titles on homesteading and agriculture, but some of its fans and authors cried foul when it published Mercola's book. Margo Baldwin, Chelsea Green publisher and board president, has defended releasing the book and endorses its claims.

"Our public responsibility is to the truth, as far as we can determine it," Baldwin recently told the Washington Post. "Creating a climate of fear and misinformation is what mainstream media seems to excel at, not independent publishers like Chelsea Green."

The Seven Days story generated several letters to the editor supporting Chelsea Green's decision to publish Mercola — and supporting the newspaper for writing about that "ethically precarious" decision.

Letters to the Editor (9/29/21)
By Seven Days Readers
Letters to the Editor
On Wednesday morning, Mercola took to Twitter — where he has 321,000 followers — to slam YouTube for axing his videos, writing that "anyone who asks questions or challenges the hard sell is immediately censored."

"Independent media platforms that defend freedom of speech and the rights of Americans to speak out against the global tyranny will defeat the censorship extremists," Mercola wrote. "We are united across the world, we will not live in fear, we will stand together and restore our freedoms."

A few hours later, he tweeted out links to his content on "free speech supporting" channels.
Prev
Next