A Progressive-led effort to have the City of Burlington collect multiple types of household waste failed at Monday night's city council meeting.

Councilors voted 6-6 to create a municipally operated system, which would have had city-owned trucks pick up trash and food waste in addition to recycling, which the city already collects, for residences of up to four units.

A tie vote results in a failed motion, and this one fell largely on party lines: All six Progs voted in favor of the model, and both council independents joined the four Democrats in opposition.

"I had hoped that we would be able to move forward in a bipartisan fashion with a proposal," said Mayor Miro Weinberger, who supports a different collection model. "Perhaps there's still a route that we could do that after tonight."

The most recent discussion focused on two distinct proposals — the Progressive-endorsed municipal model and a so-called "hybrid" option favored by Weinberger's administration that would have kept the city's recycling service but "franchised" trash and food scrap pickup to private haulers, who would bid for the right to collect in various city districts.

Should Burlington Take Over Waste Collection? Councilors Talk Trash Options
By Courtney Lamdin
Environment
The city says both models would save customers money, and residents who haul their own waste could opt out of either.

But some councilors expressed concern over the cost of the municipal system. The proposal would have required a $6.7 million bond to build a new facility for vehicles and equipment and cost $5 million annually to operate, including hiring 14 unionized workers. The hybrid model would cost a fraction of that amount — about $900,000 a year.

Councilor Mark Barlow (I-North District) questioned whether residents could afford another bond after the council voted on Monday to put two on a special ballot in December: A $40 million bond for capital projects and a $20 million bond to support Burlington Electric Department programs.

"All [would] increase costs for city residents, and recent tax increases have already stretched residents' ability to pay," Barlow said. "We should be really picky about the projects we ask taxpayers and ratepayers to pay."

Weinberger also jumped into the debate, saying that the city's public works department is already "straining to meet historic challenges," such as addressing years of deferred maintenance and improving streets.

"There is no way to add another major priority to this very long list already, and there's no need to," he said. "We can achieve virtually all of the social goals that the sponsors of this resolution seek through the hybrid model ... with much less strain and diversion of critical attention and focus and resources."

Progressives argued that the municipal model would invest in local jobs that support middle-class families in Burlington. Councilor Jack Hanson (P-East District) said that the city could aggressively advance its climate goals if it controlled a waste-hauling fleet, such as by purchasing electric trucks. Councilor Jane Stromberg (P-Ward 8) said the city already runs an electric utility and manages city water service, which "shows me that we are more than capable of running something like this type of system."

Private companies, however, have argued that Burlington should leave waste hauling to the pros. Several representatives from those companies attended Monday night's meeting to urge councilors to vote down either consolidated collection option.

That's unlikely to happen, however. The councilors who opposed the municipal model will likely bring forward another resolution to adopt the hybrid collection system at a future meeting. 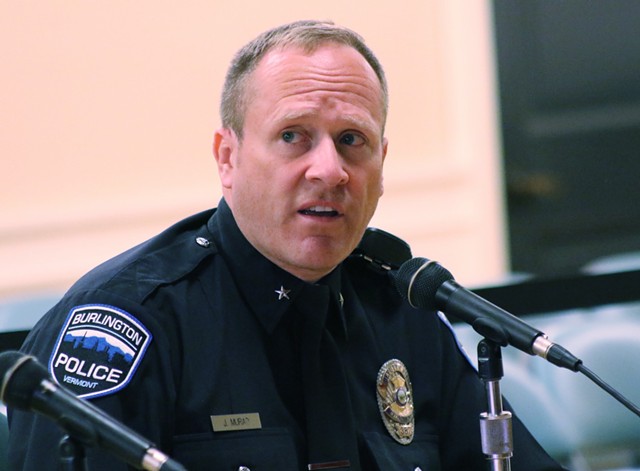 Later Monday, councilors unanimously approved the police department's request to spend coronavirus relief funds for bonuses to retain and recruit officers — albeit an amount less than what Acting Chief Jon Murad had requested.

Councilors agreed to fully fund the recruitment program but lowered the retention bonus to $10,000 per officer for a total of $850,000 for both programs.

Burlington Police Chief Requests Coronavirus Relief Funds to Pay Officer Bonuses
By Courtney Lamdin
Off Message
Murad says the department is down to 68 officers from more than 90 last June, when a council majority voted to reduce the force through attrition. He expects another 10 officers will leave by next July.

"We are losing officers rapidly at a rate that, frankly, does begin to compromise what we can do," Murad said.

Councilors have twice refused to raise the department's roster cap above 74. A draft report by an independent consultant, obtained by Seven Days earlier this month, recommends Burlington have between 76 and 83 officers. Councilors will discuss the report's findings once it's finalized later this week.

Mayor Weinberger said the department needs officers to help train people in those new positions. The bonuses send the message to officers that "they are an important part of our public safety efforts, and we value them," he said.

Also Monday, councilors voted to set a special election on December 7 for voters to consider the Burlington Electric bond, plus a $40 million capital bond. Estimated projects include:

"I know my constituents are really struggling with the reappraisal," she said. "They need lower taxes, not higher taxes."

Councilor Karen Paul (D-Ward 6) acknowledged the costs coming down the pike, including what's likely to be a "significantly higher" school bond to rebuild Burlington High School after it was found to be contaminated with carcinogenic chemicals. But Paul said the city needs these capital investments.

"It's something that we, as elected officials, need to do, and do now," she said.
Prev
Next