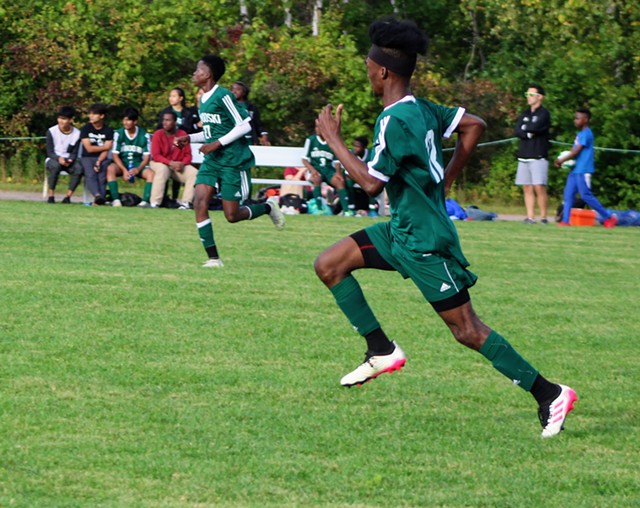 In an open letter published on Friday, McMannon wrote that at a home game on Saturday, September 18, three soccer players from Enosburg Falls High School, as well as spectators at the game, called Winooski players “the N-word, monkey and terrorist.”

“This is not the first time [Enosburg] soccer players have racially abused [Winooski] students,” McMannon wrote. “This continued racial violence … dehumanizes and perpetuates a ‘lesser than’ attitude toward our students who are some of the most talented, intelligent and resilient human beings I have ever known.”

At a school board meeting last summer, Winooski High School students and alumni spoke about the racial epithets they’d been subjected to from opposing sports teams dating as far back as 2013. Winooski is the only “majority-minority” school district in the state, with around 51 percent students of color.

In Winooski, Students Lead Charge for Anti-Racist School Reform
By Alison Novak
Education
The Vermont Principals’ Association, the governing body for middle and high school athletics in Vermont, must implement anti-racism training for all officials and coaches, McMannon wrote in his letter. Additionally, the association should develop procedures for reporting and investigating racial abuse.

But the VPA isn't investigating the allegations of racial slurs. Instead, it's considering a season-long ban for a Winooski player who allegedly head-butted an Enosburg player during the game in question.

In an interview on Monday, VPA president Jay Nichols said that the organization began investigating after the Enosburg athletic director contacted the organization on Monday, September 20, and sent along a video that showed an altercation between players during the game.

Johnson told Jackson that the player who appeared to have head-butted the Enosburg student would be suspended indefinitely pending a disciplinary hearing to determine the full extent of his punishment. That hearing is scheduled for this week.

Nichols said school districts usually discipline students, while VPA hearings of this kind are rare; there were none last spring and this is the only one so far this fall.

As for the allegations of racial abuse?


"If evidence is brought to us about racial slurs we will take appropriate action which certainly could include an investigation," Nichols said in an email. "At this time the Enosburg School District is investigating that. We are waiting for them to conclude their investigation. No specific evidence has been brought to the VPA at this point identifying any specific players or spectators who may have used racial slurs toward Winooski players. If any of that evidence exists we would appreciate anyone sharing that with us."

Winooski High School principal Jean Berthiaume has talked to the team, watched the game video multiple times and has a different take on what happened. He did not attend the game but Jackson, the athletic director, told him that it was “fairly heated” and “rough.”

A Winooski soccer player emailed Berthiaume shortly after the game asking to speak to him about it. That Monday, the student, joined by several other players, told the principal that the team was anxious about going to Enosburg to play a second game in October. The students told Berthiaume that they had been called “the n-word” and “monkeys” and “terrorist” by Enosburg athletes and by spectators on the sidelines. They said that “in the heat of the moment,” the Winooski team captain tried to tell a referee what was happening, but instead was given two yellow cards and was thrown out of the game.

The students told Berthiaume that they wished they had taken a calmer approach in getting the referee’s attention, but they wanted him to know they were upset about the injustice they had experienced.

Berthiaume said  the video of the incident, which was cropped and taken from the sidelines, showed “two students colliding,” but no head-butting. The student who is facing the VPA disciplinary hearing this week is a non-native English speaker who told Berthiaume he was “too quick” and slammed into the Enosburg player. He also said that he was trying to defend his teammate after an Enosburg athlete called him the “n-word.”

Nichols said that he is aware that racist incidents have happened during sports games and that Winooski students have been targets of it.

“We’re not saying any of the behavior that [McMannon] suggested occurred didn’t occur,” Nichols said. But “we just don’t know … We can only act on what we have proof of. ”


The VPA created a diversity, equity and inclusion committee last spring and has already started taking some actions McMannon requested, Nichols said. This winter, coaches will undergo a training on implicit bias from the National Federation of State High School Associations. And in the fall of 2022, all sports officials will undergo that training.

Mike Jabour, South Burlington’s athletic director and cochair of the VPA's diversity, equity and inclusion committee, has also suggested creating a database for athletic directors to report and track race-based incidents to see if patterns emerge.

“We know that inappropriate behavior happens to people of color … and that includes student athletes, and we all need to band together to do everything we can to stop that crap,” Nichols said.

“If either is found to be true, we will take whatever disciplinary action we can to hold the parties responsible,” Cota wrote in an email to Seven Days. “Racial comments and physical violence have no place in the sports arena, or anywhere else in our schools.”

Winooski Police Chief Rick Hebert said that one of his officers was contacted by a parent from Enosburg, who alleged her son was assaulted during the game. The Winooski Police Department is still gathering information about what happened, Hebert said.

For his part, Winooski principal Berthiaume said he’s been thinking about how he can best protect his student-athletes going forward. When it comes to a rematch with Enosburg, “there’s a big ‘if’ for me if there’s a next game," Berthiaume said. "And if there were to be another game, we would need to find a neutral place to have the game." He also said he would insist that no spectators attend.

The Winooski community is planning to rally around its soccer players. After being contacted by a friend who is a Winooski parent, community organizer Mellisa Cain came up with the idea for a “fill the stands” event, planned for Tuesday at 6:30 p.m. at Winooski High School during the boys’ soccer game against Oxbow High School.

Cain said her hope is that lots of people show up with signs of solidarity and send the message to the soccer team and students that they are “loved and supported.”


"Our students deserve safety, security, and support," she wrote. "There is absolutely no room for hate in Winooski."
Prev
Next