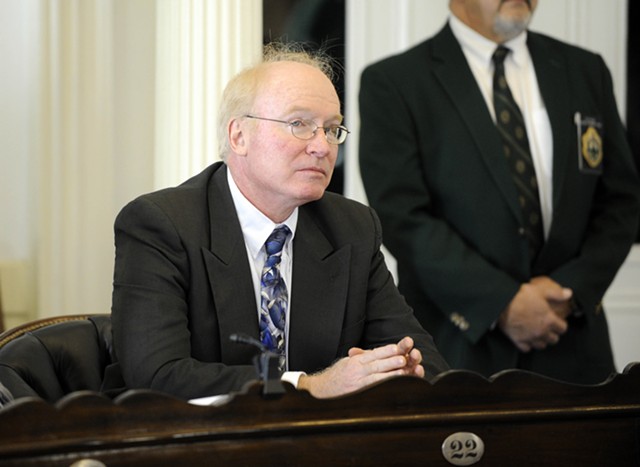 Vermont's chief health care regulator, the Green Mountain Care Board, announced Friday that it will join a state investigation of long wait times for medical appointments.

The long-simmering crisis was the subject of a Seven Days cover story this week that detailed how patients are waiting months for specialty care at the state's largest hospital, the University of Vermont Medical Center in Burlington.

The care board, which is one of the most powerful health care regulators in the country, has known about access challenges at both UVM and other Vermont hospitals for years but has done little to compel improvement.


At a public meeting on Friday, care board chair Kevin Mullin said that recent wait time data, coupled with anecdotal stories about the delays, had convinced board members that Vermont's "[health care] quality and access are compromised right now." He tasked board member Jessica Holmes, a Middlebury economics professor, with overseeing the regulatory body’s involvement in the state’s probe.

“The Green Mountain Care Board will work with our partners,” Mullin said. “When I say our partners, I’m not just referring to our state colleagues, I’m talking about health care providers around the state. We will all work to first identify the problem, and second, come up with strategic solutions to that problem.”

The Department of Financial Regulation will also join the investigation, which will be led by Ena Backus, Vermont's director of health care reform. Finance Commissioner Michael Pieciak noted that lengthy appointment delays make patients sicker, which, in turn, drives up insurance costs.

“A relatively minor medical issue can turn into something much more serious when Vermonters are unnecessarily waiting many months for appointments," Pieciak said in the press release.

The Doctor Won’t See You Now: Patients Wait Months for Treatment at Vermont’s Biggest Hospital
By Colin Flanders and Chelsea Edgar
Health Care
More than two dozen Vermonters shared stories with Seven Days last month about how they had endured frustrating and sometimes debilitating waits for appointments at UVM Medical Center. The backlogs, which have existed for years but worsened during the pandemic, have rippled through the hospital, placing immense pressure on frontline workers. Many now feel like they can no longer provide the highest level of care. "A lot of us feel very helpless," one neurosurgery nurse said.

Human Services Secretary Mike Smith announced the state's investigation hours after Seven Days published its story on Wednesday. Smith told the paper that he had been hearing troubling reports of appointment delays "for a while."

It was not clear exactly what the investigation will entail, how the three state partners will collaborate on it or when it will conclude. Smith said his agency will examine all Vermont hospitals and focus on wait times for both specialty and primary care, with a goal of figuring out why delays exists and what can be done to lessen them.


The Green Mountain Care Board, which approves hospital budgets, is currently reviewing submissions for fiscal year 2022 and must issue decisions by September 15.

Mullin told Seven Days last month that he had only just recently asked the care board's attorney to investigate its authority to regulate wait times. But on Friday, he suggested that the board now consider requiring the UVM Medical Center to adopt a strategic plan for addressing its backlogs. Hospital leaders could then be asked to make quarterly reports, he said, so that the public sees whether they've made any progress.

"We all see that UVMMC is trying to do the right thing and doing everything that they feel is in their power to address this issue," Mullin said. Still, the state's health care system can only work when its biggest provider — the medical center — is treating patients in a timely manner, he said.

“This system of not asking every hospital to do everything only works if the hospitals that we are asking to provide care for those complex situations can take that on,” he said.

For their part, UVM Health Network leaders appear open to outside assistance. In a statement released shortly after the investigation was announced, CEO John Brumsted said he has had "many" conversations with state leaders about the wait time crisis and would be "very grateful" for any help in solving it.

Smith sounded a similarly collaborative tone. "We are not trying to punish organizations," he said in Friday's press release.
Prev
Next