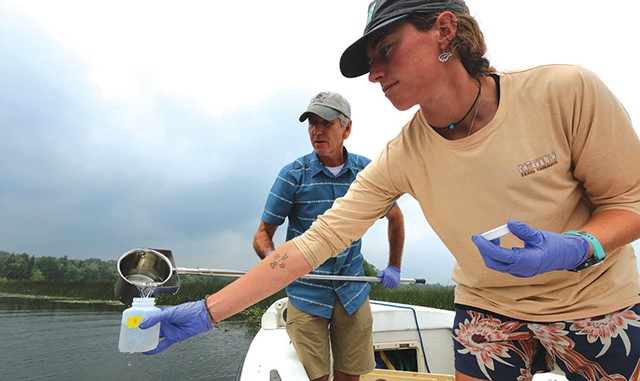 Vermont regulators extended a ban on the release of landfill leachate into Lake Memphremagog for an additional three years. The decision comes as officials explore better ways to clean the wastewater seeping out of the state’s mega-dump near the Canadian border.

The moratorium is now good until 2026. State officials announced it during a public meeting in Newport on Tuesday evening.

The Coventry landfill has long been a contentious issue along the border, and residents from both countries made it clear during the event that they don’t want the treated liquid, often dubbed “garbage juice," released into the international lake ever again. The nasty brew often contains polyfluoroalkyl chemicals, referred to as PFAS, that leached out of garbage.

Vermont Natural Resources Secretary Julie Moore chaired the meeting, which went more than an hour over its scheduled 7 p.m. finish due to intense public interest in the issue.

“She really got a flavor of just how pissed off people are and how the economic and environmental injustice up here has just gone on and on and on,” Pam Ladds, a member of the anti-landfill group DUMP, which stands for Don’t Undermine Memphremagog’s Purity, said in an interview Wednesday.

For years, leachate from the Coventry landfill was treated at the Newport wastewater facility and released into the Clyde River. But in 2019, DUMP, which failed to block a 51-acre landfill expansion, negotiated a four-year moratorium on the practice.

Instead, the 11 million gallons of leachate collected at the landfill each year is trucked to wastewater treatment plants in Montpelier and Plattsburgh, both of which ultimately release water into the Lake Champlain basin.

With the original Memphremagog moratorium running out in 2023, DUMP members had been pressuring the state to find a solution that would remove PFAS from the liquid.

In an interview Wednesday, Moore said the state is working on exactly that, and expects to require the landfill operators, Rutland-based Casella Waste Systems, to install and test a pretreatment process at the landfill that removes PFAS from the leachate.

Lake Memphremagog’s Natural Beauty Belies Worries About Contaminants and Fish With Tumors
By Kevin McCallum
Environment
The toxic compounds are found in a range of household products from cookware to rugs, and are called "forever chemicals" because they don't easily break down in the environment.

The Vermont Department of Environmental Conservation is preparing to issue a draft leachate management permit to Casella by the end of September, Moore said. That permit would require the company to undertake a five-year pilot treatment project.

The plan calls for the company to conduct a more detailed study of the technologies that exist to remove PFAS, and to propose a viable treatment option by the beginning of 2022. A previous study of options included reverse osmosis, charcoal filtration, and even boiling down the leachate and encasing the concentrated sludge in cement blocks.

“These are contaminants of emerging concern, and so the technologies to treat them are also emerging,” Moore said.

Casella would then install one of the technologies and test it under various conditions for at least two years of intense analysis. Only then would a decision be made about whether such a solution would work long-term, Moore said.

In the interim, the Coventry leachate would continue to be trucked to different wastewater treatment plants, Moore said.


Ladds said the group is "delighted" by the extension but still skeptical Casella can find an acceptable solution. She praised Moore and her colleagues for their patience and willingness to listen to the more than 50 people who attended the meeting in person and 60 more who participated remotely.

The meeting covered a range of issues, including cancerous lesions on fish in the lake, high levels of phosphorus from runoff, and recent PFAS test results , Moore said.


Ladds, the DUMP member, said the results don’t mean much to her because they were taken two years after the leachate treatment at Newport ceased.

But Moore said she is “cautiously optimistic” that the results suggest PFAS chemicals are not migrating from Vermont into Québec and contaminating the water supplies of Canadians. Some Québec residents and politicians suggested as much after the chemicals were found in the lake last fall near Magog. That city and nearby Sherbrooke both draw its drinking water from the lake.

Moore said she was grateful for “the turnout and the engagement and interest people on both sides of the border have in protecting this really beautiful, beautiful place.”
Prev
Next