Lawmakers Press Scott to Do More to Fight COVID-19

Vermont's legislative leaders on Tuesday called on the governor to do more to halt the spread of the COVID-19 virus and to provide clearer guidance to schools as they prepare to welcome students back to the classroom.

“Vermonters have consistently asked why we aren’t doing more to prevent the spread of the virus,” Krowinski said in a release. “We have the tools available to protect ourselves, and any step we can take to prevent someone from being hospitalized or succumbing to this virus is worth taking.”

Senate President Pro Tempore Becca Balint (D-Windham) echoed her colleague’s remarks. As the mother of a child under 12 who is ineligible for vaccination, Balint said she understands the anxiety parents feel about sending their unvaccinated kids back to the classroom as the virus surges.

“It is unclear and confusing to thousands of parents across Vermont why students, faculty, and staff are not being required to wear masks in schools at a time when we have community spread of the virus and our youngest children don’t have the protection that adults have available to them,” Balint said.

At his weekly press conference, Scott responded to the critique by saying that the state’s response to the virus has been the best in the nation in part because its leaders have so far refrained from politicizing the issue as has happened in other states.

“Playing politics on this issue isn’t going to help this situation, or help Vermonters,” he said.

In her statement, Krowinski praised the state’s evidence-based response to the pandemic so far, but said Scott’s “change in strategy” was failing to keep Vermonters safe. She called for a more “proactive” approach in line with guidance from the federal Centers for Disease Control and Prevention. The CDC is recommending all people, no matter their vaccine status, wear masks when indoors in areas of "substantial or high virus transmission." All counties in Vermont qualify as having either high or substantial transmission,  according to CDC data.

In her statement, Krowinski also noted that five states continue to have mask mandates, and asked what it would take for Vermont to follow suit.

Scott countered that one of those states cited by Krowinski is Louisiana, where the virus rages out of control. The number of cases in the state is 14 times that of Vermont, and its death rate is 62 times higher, he said.

“That is like night and day to where Vermont is,” Scott said. “If we were experiencing that in Vermont, we’d be doing the same thing.”

The state reported 798 new COVID-19 cases over the past week, the highest rate since April and dramatically higher than the 35 cases per week the state had seen at the beginning of July.

The rate of increases in new cases was slowing, however, with the new cases just 5 percent over the 758 from the previous week. The previous week saw a 41 percent increase, and the week before that an 83 percent spike.

Michael Pieciak, commissioner of the Department of Financial Regulation, said the virus, if it follows the same course as elsewhere, was expected to plateau and drop sharply in coming weeks.


If that didn’t happen, Scott and his administration would reevaluate its strategy. 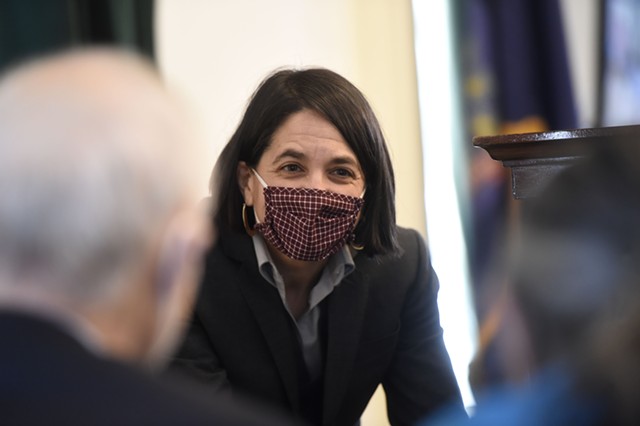 In an interview, Krowinski said she spoke with Scott last week, relayed concerns she was hearing from residents, and didn’t get clear answers to questions such as what data would trigger another mask mandate.

“Parents and teachers are very concerned right now, and this school-by-school and town-by-town strategy isn’t helping,” she said.

Scott has said he lacks the authority to order a mask mandate without a state of emergency, which he lifted in June. Current case counts and projections do not justify another emergency declaration, he added.

During his Tuesday press conference, Scott stressed that he strongly encourages districts to follow the guidelines and adopt rules that require masking for at least the first 10 days of instruction. After that, if vaccination rates are above 80 percent for students over 12, schools can make masks optional, according to the guidance.