The Progressive caucus of Burlington's City Council defeated a second effort on Monday to reverse its steep cut to city police ranks despite warnings that their decision would doom the department.

A resolution to increase the roster cap to 82 officers, up from the 74-officer limit enacted during historic protests and calls to "defund" the police, failed on a tie vote, with Councilor Zoraya Hightower (P-Ward 1) absent.

The vote came as interim Police Chief Jon Murad, Democratic Mayor Miro Weinberger and others contended that the Burlington Police Department is experiencing a free fall in its ranks as demoralized officers flee. Supporters have also pointed to heavily publicized gunfire incidents in recent months as signs that a hamstrung department is less able to keep Queen City residents safe. And a survey conducted by the police officers' union found that roughly half of Burlington cops were actively seeking employment elsewhere.

Earlier this month, the citizen police commission unanimously supported an increase to the roster cap. Downtown business groups have also pushed for the change.

Burlington Police Commission Recommends Raising Roster Cap
By Colin Flanders
Off Message
Some councilors who voted for the cuts in 2020 acknowledged on Monday that officers were leaving at a faster rate than they'd anticipated.  Yet they didn't budge on the roster figure. Any further changes, they said, should only take place once a highly anticipated outside study of the police force, due September 30, is complete.

All Eyes Are on a Consultant Reviewing Burlington’s Police Department
By Courtney Lamdin
Crime
The decisive vote came from Ali Dieng (I-Ward 7), who excoriated fellow city officials for quickly enacting drastic cuts but said the Democrats' resolution amounted to a similar kind of knee-jerk governance. 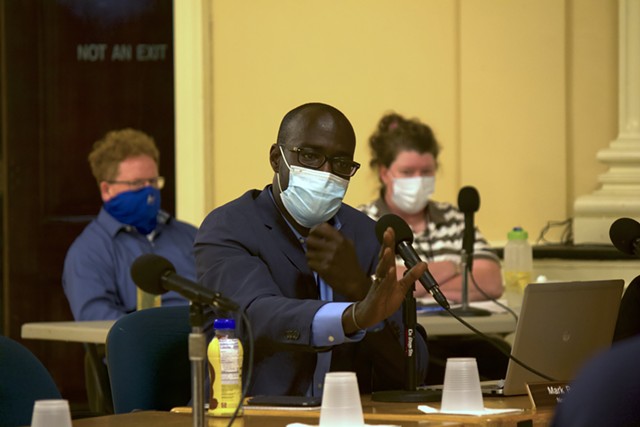 "We failed," he said. "We have to acknowledge that."

"I am so angry right now," Dieng later added.

The police department currently has 75 sworn officers, down from 90 in June 2020. But Murad said more cops are on the way out, and the effects of short staffing are taking a toll on officer morale, burnout and performance. Overtime is now twice the three-year average, he told councilors Monday night. The number of officers who will be available for patrol in September is a little over half the previous level, he added.

Raising the cap would allow the department to begin hiring new officers now, before staffing levels reach perilous lows, Murad said. He and others also said it would send a message of support to the remaining staff.

Councilor Joan Shannon (D-South District), who introduced the resolution, compared the measure to a tourniquet applied to a victim who is bleeding out. Mayor Weinberger, in a statement released just before the late-night deliberations began, said further departures could mean the city "will cease to have a functional police department."

Then there was Amanda Skehan, who described herself as an "ardent supporter of criminal justice reform" who had a family member shot by an off-duty officer. She described a recent encounter with a woman having a mental health episode who threatened to shoot her and defecated in the lobby of her home.

"We are going to still need police for many of these calls," she said. "Please re-fund our police department."

Councilor Jane Stromberg (P-Ward 8) said she was open to reconsidering her earlier votes on police staffing but wanted any decision to be based on data. Dieng sought to delay a vote until councilors could see a draft of the forthcoming consultant report on department operations.

Dieng's amendment failed. The council then decided to peel off a portion of the resolution that authorized the department to hire two civilian community service liaisons at the Burlington Community Justice Center. The measure passed 8-2, with Dieng and Chip Mason (D-Ward 5) opposed.
Prev
Next