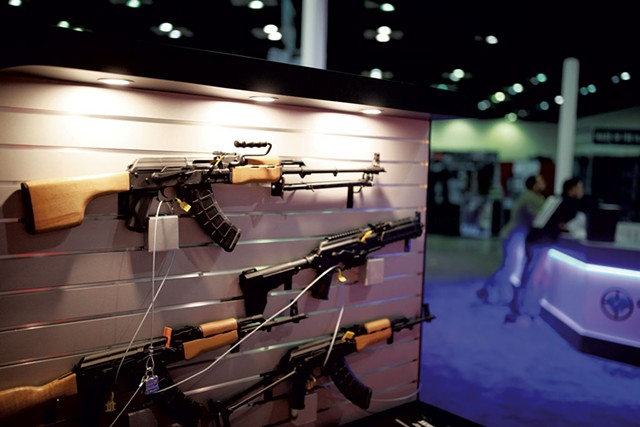 Victims of a 2019 mass shooting are suing the Vermont arms dealer that made the rifle a gunman used to murder attendees of a California garlic festival.

A dozen survivors last week added Century International Arms as a defendant in their pending civil lawsuit against the nonprofit that ran the annual Gilroy Garlic Festival, the City of Gilroy, Calif., and a private security contractor.

They say the gunmaker's business practices have funneled “uniquely lethal” semiautomatic rifles to criminals and “helped cause the mass shooting at the Gilroy Garlic Festival” that left three people dead and 17 wounded.

The shooter, who died at the scene, wielded a WASR-10, a relatively inexpensive variant of the AK-47 that is manufactured in Romania. Century Arms, which is headquartered in Florida and has a manufacturing plant in Georgia, Vt., imports the guns and distributes them in the United States after modifying them to comply with state and federal laws. Century Arms has been previously described in court papers as the exclusive U.S. distributor of the Romanian arms.

Their products have been the weapon of choice for numerous mass shooters and have turned up in the arsenals of international drug cartels, Seven Days has previously reported.

Century Armed: Vermont Importer's Guns Used in Mass Shootings
By Paul Heintz
Crime
The man accused of killing 23 people at an El Paso, Texas, Walmart in 2019 is also alleged to have purchased a WASR-10 online, according to federal charging documents. The indictment does not specify what website he used or who manufactured it.

The 19-year-old Gilroy shooter purchased his WASR-10 at a Nevada gun shop. The model was illegal to possess in California, though Century Arms also makes a “California compliant” version.

The survivors’ complaint accuses Century Arms of having “intentionally flooded” nearby states with the WASR-10s that were illegal to possess in California but could easily be transported there. The mass shooting, they allege, was a “foreseeable” and “probable” consequence of Century Arms’ failure to “adopt reasonable safeguards to prevent the diversion of firearms to dangerous parties.”

The complaint contends that Century Arms is circumventing federal firearms importation bans by replacing some gun components with U.S.-made parts. Moreover, the WASR-10 is effectively an illegal machine gun, they contend, because owners can easily modify it to become fully automatic.

“Whether or not the Rifle used in the Attack was, in fact, modified to fire in a fully automatic fashion, its ready susceptibility to such modification rendered it a ‘machinegun’ as sold, prohibiting its sale to the general public,” the complaint alleges.

Neither Century Arms nor the plaintiffs' attorneys immediately responded to requests for comment.

Typically, gunmakers have sought to have such claims against them dismissed under the federal Protection of Lawful Commerce in Arms Act, which shields them from liability for crimes committed using their guns.

Several recent court decisions, however, have cracked open the door for victims to pursue claims. Families impacted by the Sandy Hook Elementary School massacre in Connecticut are suing Remington over its marketing practices. In July, a California judge allowed negligence claims against Smith & Wesson to proceed in a case stemming from another 2019 mass shooting outside San Diego.

Century Arms, which employed more than 100 people in Vermont in recent years, has enjoyed support from the state’s elected leaders, even winning a carve-out in landmark state gun legislation that banned possession of high-capacity magazines.

Read the amended complaint below: