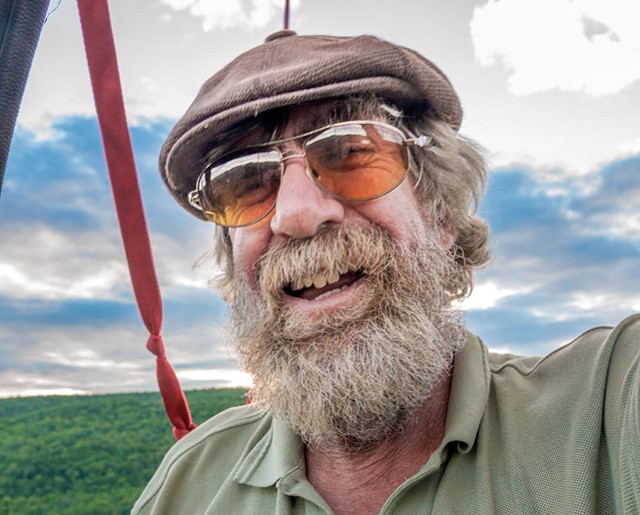 Brian Boland, a hot air balloon pilot with an international reputation for do-it-yourself balloon building, died on Thursday after falling from his balloon near the Connecticut River in Bradford. He was 72.

Boland and four passengers took off  on Thursday evening from Post Mills Airport in Thetford, where Boland lived with his partner, Tina Foster. Some time later, the balloon touched down in a field. The basket tipped over, causing one of Boland’s passengers to fall out. As the balloon rose again, Boland became entangled in the gears below the basket, fell to the ground and was killed, according to Vermont State Police.

The balloon drifted across the Connecticut River, landing in a copse of trees, where the remaining three passengers climbed out unharmed.

The National Transportation Safety Board is investigating the incident.

Boland had been building and flying his homemade aircraft for more than five decades. In 1971, he constructed his first hot air balloon for his master’s thesis at the Pratt Institute in New York City. After graduating from Pratt, Boland became an art teacher at Farmington High School in Connecticut, where Paul Stumpf, a balloon mechanic and builder who now lives in Andover, was one of his students. Under Boland’s tutelage, Stumpf found his own passion for ballooning.

“Brian was a natural pied piper, just absolutely charismatic,” said Stumpf. “He was never at a loss for people to help him with his projects.”

In 1993, Boland’s only child, Jeff, died unexpectedly of a heart attack while mountain biking. Seventeen years later, as a tribute to his son, Boland decided to turn a pile of scrap wood from the collapsed roof of the museum he created at the Post Mills Airport — a madcap curation of sundry objects and some of Boland’s original pieces, including a multi-story installation made with hundreds of crutches — into a 122-foot sculpture of a brontosaurus.

As Stumpf recalled, at least 100 people showed up to help him build it. (A permitting dustup ensued; finally, the Town of Thetford ruled that the brontosaurus was, indeed, a work of art.)

Boland met Foster in 2005, after he landed his hot air balloon in her neighbor’s yard. When Foster came outside to help him pack up his balloon, Boland invited her to the Post Mills Airport, which he had purchased after he moved to Vermont in the late 1980s, to help him install a clawfoot tub on the roof.

“You couldn’t stand around him for more than two minutes before he’d ask you to do something,” Foster said. “He always had some huge project going on.” 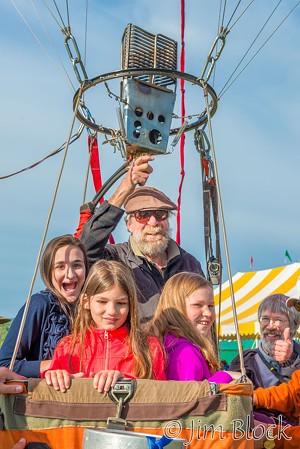 Eventually, Foster moved into Boland’s apartment above one of the hangars at the airport. According to Foster, an art teacher had once told Boland that it was always possible to make interesting work with the right quantity of anything, a dictum which seems to have informed his sculpture made of crutches; consequently, Foster said, she was never allowed to throw away a spent light bulb.

“He was a genius,” she said. “He just saw things differently from everyone else. He could make amazing stuff out of nothing, and he lived the way he wanted to.”

Boland had an antic spirit, a restlessness that drove him to eclectic exploits. Over the course of his life, he logged 11,000 hours in the air, a feat matched by few other balloonists.

Boland drifted over the canopy of the Amazon rainforest and earned the distinction of being the first person to cross the 250-mile span of Long Island Sound in a small hot air balloon.

He had an epic, booming voice; sometimes, Stumpf’s parents in Connecticut would call and tell him that Boland had flown over their house.

“I’d say, ‘Did you see his balloon?’” said Stumpf. “And they’d say, ‘No, we just heard him talking to the passengers.”

On Friday morning, as media outlets from the Boston Globe to People magazine reported on Boland’s death, the Balloon Federation of America posted a tribute to him on its Facebook page. In the comments section, the remembrances poured in.

“He landed in our yard in Vershire VT one summer and took us for a little lift up,” one person wrote. “Nicest man.”

“Balloon man,” reads another post, “I will miss your flyovers.”
Prev
Next