Redstone to Drop Lawsuits Against CityPlace Burlington Project | Off Message 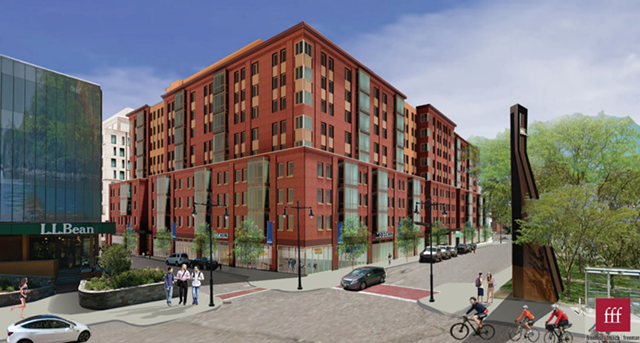 Redstone has dropped its lawsuit against the City of Burlington and has also agreed to drop its lawsuits against the beleaguered CityPlace Burlington project as part of a global settlement between the parties.


The agreement says the city will pay Redstone $400,000 in tax-increment financing funds for an easement to build a road underneath the company’s building at 100 Bank Street, which is adjacent to the CityPlace site. The easement, for 4,000 square feet of Redstone’s property, will allow the city to reconnect a portion of Pine Street that was lost to the former mall.

The city also agreed to provide Redstone with up to 200 parking spaces in city-owned garages, at the city’s prevailing rate, for at least five years. The settlement is the result of two mediation sessions between the city, CityPlace team and Redstone.

“I initiated and led this mediation because it was clear that Redstone and the developers of CityPlace were on a path of serious and deepening disagreement that threatened to delay or terminate the long-anticipated, transformative downtown project,” Mayor Miro Weinberger said in a statement Friday. “I am grateful that the two sides set aside their differences and worked hard to get to this agreement that will do so much good for the community.”

The agreement still must be approved by both the Burlington City Council and, because TIF funds are involved, the Vermont Economic Progress Council.

Once final, the agreement will resolve Redstone's four legal challenges against the project, the first of which was filed last summer. That civil suit claimed that the 2018 teardown of the former mall damaged 100 Bank Street, and that Redstone had to "accept less in rent than it otherwise would" because of the gaping pit left behind.

A Rival Developer Is Challenging the CityPlace Burlington Project in Court
By Courtney Lamdin
Development
In May, Redstone appealed CityPlace's zoning permit to the Vermont Superior Court's Environmental Division, claiming that the developers failed to analyze the project's impact on traffic and stormwater. Redstone also argued that the city should have reviewed the project under former zoning regulations that would have required additional parking spaces.

In June, Redstone ramped up its opposition with two additional lawsuits, including one in U.S. District Court, that named the CityPlace team, city planning staff and members of the volunteer Development Review Board. Redstone argued that the project permit violated its property rights by allowing Pine Street to be rebuilt underneath its Bank Street building.

CityPlace managing partner Don Sinex described the suits at the time as a "frivolous and contorted attempt ... to extract a cash settlement" from his development team, which includes Dave Farrington, Scott Ireland and Al Senecal. He had said the legal challenges could sink the project.

Redstone partner Erik Hoekstra told Seven Days on Thursday that the agreement includes "a fair amount of compromise from everyone involved."

Farrington said he's pleased the team could avoid lengthy legal proceedings that could have put project funding in jeopardy. A development agreement with the city says that if construction doesn't begin by September 2022, the partners will have to pay the cost of reconnecting St. Paul and Pine Streets to the city grid. If the partners meet the deadline, the city will reimburse the cost with TIF funds.

Farrington said Redstone's lawsuits set the project back by about three months. He hopes to finalize designs by this fall and possibly begin pouring concrete in early spring. The 10-story project includes plans for housing, shops and a rooftop restaurant.

A New Developer Team Wants a Shot at Building CityPlace Burlington
By Courtney Lamdin
City
"There's a lot of stuff that has to happen before it even looks like a job site," he said.

CityPlace also needs financing before work can begin. Farrington said numerous backers expressed interest in the project — but would only pursue talks once the lawsuits were settled. He said Sinex has begun contacting those parties with news of the agreement.


"As soon as the definitive legal documents are executed by all parties and the lawsuits are withdrawn by 100 Bank, BTC will immediately restart all efforts to get the long awaited CityPlace project underway," Sinex said in Friday's statement.

And while Redstone's cases may be ending, there are still two active lawsuits involving the project. In February 2019, a citizen group sued CityPlace to enforce a previous court settlement over parking; the project partners countersued that group in December 2019. Both cases are still pending in Vermont Superior Court's Civil Division.

"We're feeling much better about it," he said. "It's good news, for sure."