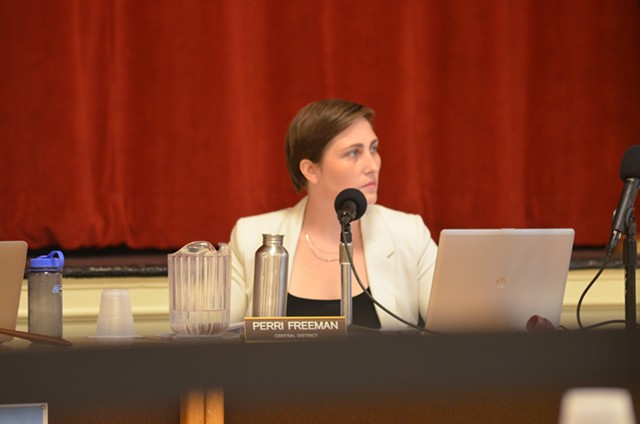 The Burlington City Council voted unanimously on Monday to consider eliminating ordinances that prohibit prostitution and will consider charter changes that could decriminalize sex work in the city.

The 12 councilors and Mayor Miro Weinberger met in the auditorium at Burlington City Hall, the first in-person meeting of the body since March 2020.

Introduced by Councilor Perri Freeman (P-Central District), the resolution asks the council's Charter Change Committee to examine a section that empowers the council "to restrain and suppress houses of ill fame and disorderly houses, and to punish common prostitutes and persons consorting therewith."

The committee will consider a possible repeal of the section, along with possible amendments to protect sex workers, including decriminalization.

The committee is expected to report back to the full council with a recommendation by October 25.

The resolution cited research and surveys that found many sex workers experience violence at the hands of clients but don't report it because of concerns about law enforcement. It also reported that decriminalization could help curb HIV transmission.

"I do really support the effort to decriminalize," Freeman said. "It's a way to make people so much safer. Sex work can be incredibly dangerous; there's so much research, there's so much evidence."


"I think at a bare minimum, for me, I want sex workers to be safe," Freeman added. "I also think sex workers are amazing people, and they deserve to be celebrated."

One makes it illegal for women — specifically — to engage in prostitution, while it also prohibits men from "engag[ing] and consort[ing] with such female for the purpose of prostitution."

A second "makes it unlawful for any person to keep a house of prostitution," which is also referred to as a "house of ill-fame." Another would eliminate the phrase "common prostitutes" from an ordinance titled, "Use of buildings by disorderly persons."

Other councilors spoke in favor of the changes, and a shift in focus from prosecuting sex work to prosecuting sex trafficking and sexual violence and harm. Mayor Miro Weinberger agreed, and said his administration supports "this modernization" of the city charter.

"I hope the ordinance committee, if it's charged with this, will work to repeal or amend any language that is discriminatory towards women, to sex workers and to victims of sex crimes," Weinberger said before the vote.

At the end of the meeting, the council cleared the room to enter two executive sessions with Weinberger. In one, the body was to hear an update on the mediation process between the development firm Redstone, CityPlace Burlington and the city involving a dispute over efforts to reconnect Pine Street beneath a building owned by Redstone.

In the other, Weinberger and city Human Resources Director Kerin Durfee were to update the council on an investigation into airport aviation director Gene Richards, who was put on leave June 30 following a complaint.
Prev
Next