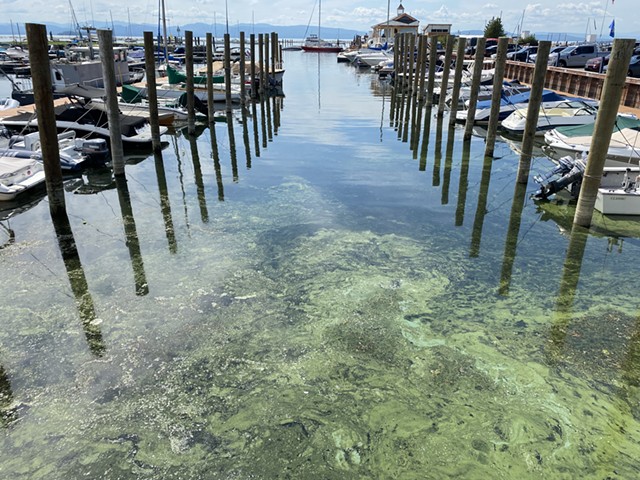 All public beaches in Burlington have been closed because of an extensive cyanobacteria bloom in Lake Champlain.

The algal blooms — which look like pea soup or spilled paint on the water's surface — were first spotted at 11:15 a.m. on Monday at Blanchard Beach and the Cove at Oakledge Park during a visual inspection by staff, said Deryk Roach, Burlington Parks, Recreation and Waterfront's parks and central facilities superintendent. Minutes later, a staff member identified a bloom at North Beach. Before noon, Texaco Beach and Leddy Beach were closed because of the algae as well.

The blooms can release toxins into the water that cause allergy- or flu-like symptoms in swimmers.  Dogs are also particularly susceptible to the cyanobacteria.


Roach said that this is the first time this year that cyanobacteria has closed Burlington's beaches, and characterized the situation as "fairly serious" and "rare" because of how widespread it is. Blooms are driven by environmental conditions, he said. Low wind, high humidity and rising lake temperatures all contribute to the blooms, he said.

When an outbreak like this occurs, an internal alert system goes out within the parks and rec department, Roach explained. Staff post signs to let people know the beaches are closed, and workers are stationed at the affected areas to inform people to stay out of the lake.

Roach could not say how long Burlington beaches will be closed. The department will work with a scientist from the Lake Champlain Basin Program to look at the weather forecast and how vigorous the blooms are to determine a course of action.

"Once they grow," Roach said, "they're harder to break up."

Lori Fisher, executive director of the Lake Champlain Committee, said she was doing a training at North Beach on Monday at 10 a.m., and the water was clear. After receiving a message about the Oakledge closure, she went back down to North Beach and saw two separate cyanobacteria blooms.

Fisher said it isn't uncommon to see blooms during this time of year. What is more unusual, she said, is having many different blooms at different locations. Because the water level is low right now, the nutrients within the water heat up more quickly than usual, leading to the blooms. Shallow ponds of water on the beach have also developed significant blooms, which are turquoise and white in some cases.

Fisher said that dogs and young children are especially susceptible to cyanobacteria because of their smaller size and penchant for exploring. Children gravitate to the little pools in the sand where cyanobacteria often thrives, she said. Dogs often gulp a lot of water when they swim.

Fisher likened the increase in cyanobacteria in Vermont to the increase in ticks. Twenty years ago, you could go out for a hike in the woods and didn't have to worry much about ticks — but that's not the case anymore, she said. The same goes for swimming and cyanobacteria.

The Lake Champlain Committee puts out weekly reports aimed at educating people so they can recognize, avoid and report cyanobacteria. Sign up here.
Prev
Next