A Vermont Couple Drove a School Bus for a Combined 103 Years. Now They've Both Retired | Off Message 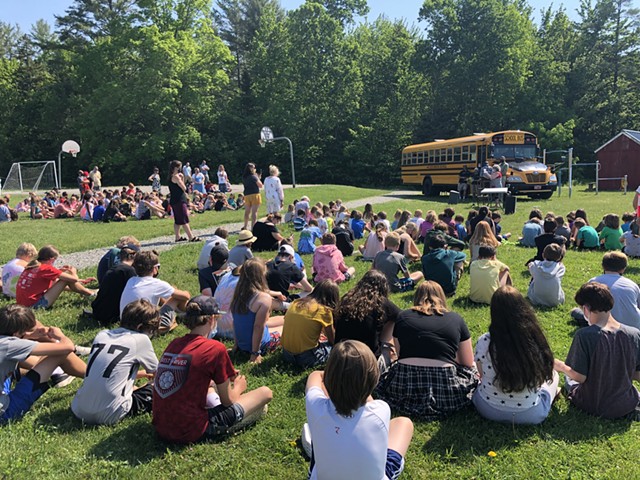 For a combined 103 years, Jerry and Lois Foster drove the school bus in southern Vermont. Through black ice and snowstorms, the couple delivered generations of children each day to Flood Brook School in Londonderry and Burr and Burton Academy in Manchester.

Following heart surgery in 2019, Jerry’s cardiologist and family convinced him to retire at the age of 81. Lois, now 80, continued driving the bus through this school year before retiring.

Earlier this month, students and staff gathered in a playing field behind the Flood Brook School to celebrate the couple’s steadfast service to their community. School district officials presented the Fosters with a Simon Pearce bowl etched with their years of service

The recognition has been “a little overwhelming,” said Lois. “You don’t realize, you know. You just take it a day at a time and … when you saw that number on that glass bowl, it was like, Wow.”

Greg Harrington, the Bennington-Rutland Supervisory Union’s operations manager, said the Fosters rarely called in sick and took impeccable care of their rigs. Jerry was a skilled mechanic who could diagnose any problem the bus experienced.

“Their work ethic is hard to find anymore,” he said.

The Fosters were also farmers — first dairy, then hay and maple — so they’d do farm chores before and after their morning bus route, recalled their daughter, Joni Foster-Robison. When that work petered out, they began mowing lawns and plowing snow for homes in the area, which they still do to this day.

Foster-Robison described her parents as “resilient and strong-willed.” They were both raised in farming families, so “they didn’t grow up expecting time off or anything extra,” she said.

Jerry began his bus-driving career in the early 1960s, when several parents in Weston, where the Fosters lived, convinced him to buy a 1948 White Motor Company school bus to bring local kids to Green Mountain Union High School in Chester. At that time, the school district didn’t pay for transportation, so Jerry had to collect money directly from families. He charged $5 for a full week of rides, recalled Lois. In 1967, he started driving for Flood Brook, where he initially earned $35 a week with no benefits. Years later, the school district began offering health insurance to bus drivers.

Starting in the mid-1980s, Jerry began driving students to Burr and Burton. That meant navigating Route 11/30 — what locals call Manchester Mountain — which Foster-Robison said is “treacherous” in the winter. 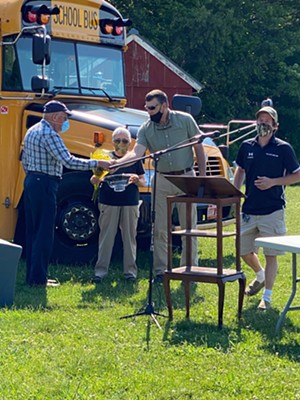 Lois got her own bus route in 1972. She had some close calls during the winter, including times she slid into ditches and had to be towed out by a wrecker, but no child ever got hurt, she said. If it was storming, Jerry would help her put chains on her tires before she left in the morning, or she’d stop along the way and get someone to help her.

Dana McNair, a paraeducator at Flood Brook whose now-grown sons rode the Fosters’ buses, remembers Lois as “the first adult I handed my child off to when he went to kindergarten for the first time, which is a really big deal.”

At the Fosters’ retirement celebration, McNair presented the couple with two school bus figurines and read a letter from her son, Dylan.

“Lois, thank you for waking me up when you got home when I fell asleep on the bus and bringing me back down to Weston, twice,” he wrote. “That little extra bit of nap time was a kindness I appreciate to this day.”

Because of the pandemic, Lois said her final year driving was a unique one. But the kids handled the change in bus protocols better than she thought they would.

“They wanted to be in school bad enough, so all you had to say was, ‘Come on guys, mask up and social distance or we’re going to be back where we were a year ago,’” she said.

Lois said she’s been touched by the outpouring of well wishes she’s received since she announced her retirement.

“The notes I’ve gotten from parents saying, ‘We never worried about our kids while they were with you,’ that’s about the sweetest thing anybody can say,” she said.

McNair said the couple’s retirements feel like “a chapter is ending.” She recalled the many times she drove past the Fosters’ home and saw their buses parked in the driveway.

“I’d know everything was right with the world,” McNair said. “I’m going to miss that.”
Prev
Next