Leading the rare public display at the private Catholic school were young women, including a rising senior, a recent graduate and a 2020 graduate, who each said they’d been sexually assaulted or harassed by fellow students on and off campus in recent years. They said administrators mishandled and downplayed their reports and, in at least one case, assigned a student to the same classroom as the young man she had reported as assaulting her.

“Jesus would not turn his back on a victim in the way the administration has,” they wrote in a letter to school officials. Administrators dispute the students’ claims.

The students, joined by some peers and a couple of parents, bore messages on cardboard signs and T-shirts in hopes of pressuring Rice to confront what they say is an ongoing problem.

Samantha Morgan, a 2020 graduate, connected the issue to the Catholic Church’s decades-long practice of burying child abuse claims against clergy: “Just because Popes cover up violence doesn’t mean Rice should,” her sign read. Hannah Sheppard, who graduated last weekend, wore a T-shirt with the message “I’m taking back what they stole from me...MYSELF” on the back.

Sheppard and Morgan both said they alerted school officials to different instances of misconduct by the same classmate, only to be let down by administrators. Morgan said they interviewed her regarding her report during her sophomore year that the classmate had groped her in a school stairwell, but took no action. She later heard that school leaders seemed to have accepted his explanation that it was an accident. Sheppard told her guidance counselor that the same boy had assaulted her off campus in 2017, when she was a freshman, she said. The following school year, she walked into a class and discovered that he was also enrolled. She immediately walked out, went to the office and asked why he was there. School leaders told Sheppard it was a mistake — and that to fix it, she would have to drop the class.

A rising Rice senior, Maddie Goddard, said a classmate touched her inappropriately on campus. She didn’t report it to school officials because she knew how they’d handled Sheppard’s report.

“I don’t feel anything is going to be done,” she said.

Minutes after the protest began, Rice principal Lisa Lorenz walked over and spoke with Goddard and Sheppard. Sheppard cried as she could be heard explaining why they were there. She also handed Lorenz the group’s two-page letter.

“It’s not just you,” she told the principal, “It’s everyone in the school.” 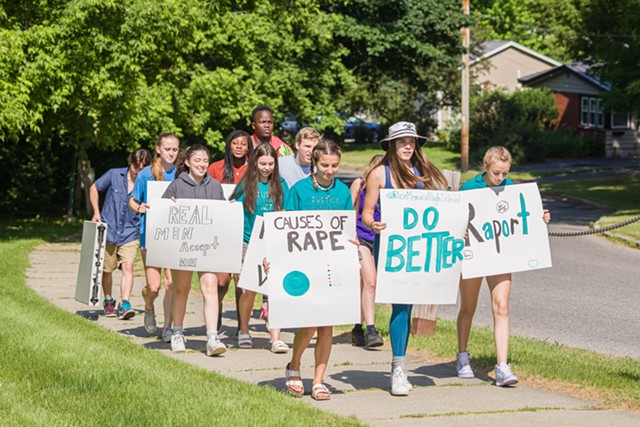 Lorenz declined an interview request but sent an emailed statement defending the school’s response to sexual misconduct allegations. Rice thoroughly investigated each complaint in compliance with “strict protocols,” the statement read, while noting that the process “can often leave one party dissatisfied with outcomes.”

“However, dissatisfaction with the outcome should not be equated with ignoring the complaint,” the statement read. “I can assure everyone that any allegation of misconduct is addressed with the utmost seriousness.”

In their joint letter, the students described school administrators as sweeping sexual misconduct under the rug in order to preserve the school’s public image. Some of the students they accused of misconduct have since been chosen for public accolades, several of the students said. The topic gets little to no attention in the school curriculum, they said, even after a former teacher was charged for taking "upskirt" photos of a student and colleagues in 2018.

Chloe Baur, a Burlington High School graduating senior who attended the protest, said the private school doesn’t seem to respond to incidents as seriously or forthrightly as BHS. “I don’t know why they have to fight so hard to get their point across,” she said of her friends.

Thousands of Students Protest UVM's Handling of Sexual Violence
By Colin Flanders
Off Message
Rice junior Maxime Makuza was one of a handful of current students who attended the protest, which was held while some students took final exams. “I came out here to show that this shouldn’t be silenced at all,” he said.

Makuza is part of a student diversity union on campus, which he said has run into similar roadblocks in trying to draw attention to other social justice issues deemed sensitive by school officials. They met with Diocese of Burlington Bishop Christopher Coyne last year in an attempt to raise a Black Lives Matter flag on campus, as some area public schools have done. The specific slogan was nixed because the diocese deemed it political, Makuza said. Diocesan schools adopted a “racism has no home here” message instead.

Some student leaders also tried to stage a walkout for Black Lives Matter during the school year, but were warned of disciplinary consequences, he said.

“Throughout the year we tried to change the way that they look at it,” Makuza said. “We didn’t really get anywhere.”