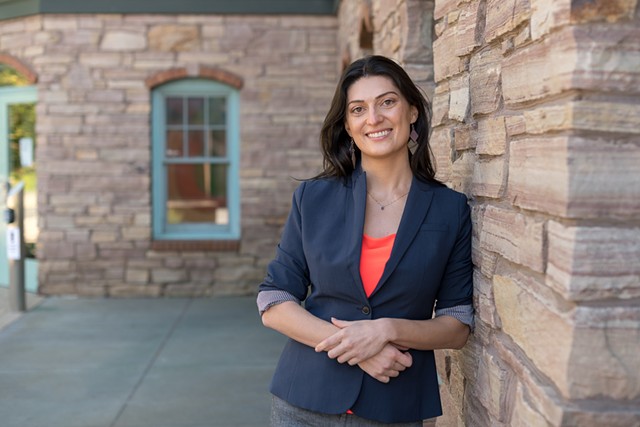 A video conference company cofounded by Champlain College professor Narine Hall has received a round of investment worth $6 million.

The company, InSpace, sells a platform that is designed to ease personal interaction between students and teachers in virtual classrooms. InSpace announced Tuesday that it received $6 million in two rounds of funding, including a $2.6 investment from Boston Seed Capital in January, and $1.5 million each from Gutbrain Ventures of Boston and PBJ Capital of Lincoln, Mass., at the end of May.

Hall is a data science assistant professor and academic program director at Champlain College. She created the platform with software and video engineer Haykanush Lputyan, who lives in Armenia. The two, friends from college in that country, launched it last year as the pandemic sent students and professors out of the classroom to work remotely.

The company said its software is now used by more than 100 universities and schools worldwide. Hall, who lives in Colchester, said InSpace was making money almost as soon as it was founded 11 months ago and now has about 10 employees in Armenia and five in Vermont. She's looking for more employees, including those who can work remotely.

The size of the investment is significant, said Cairn Cross, who cofounded Fresh Tracks Capital in Shelburne, a firm that has invested in 55 companies over the past 20 years.

Vermont companies landed 31 venture capital deals worth a total of $100 million between 2010 and 2020, Cross said in a presentation in February. The average investment over the past five years has been $2.3 million, he said.

But the investment environment in Vermont is changing rapidly. Cross  noted that Beta Technologies, the electric aviation company in Burlington, raised $368 million in a private round of funding in May. He expects that huge deal, and other smaller ones over the next year, to put Vermont on target to increase investment this year five-fold.

Flight Path: BTV’s Beta Technologies Is on the Cusp of a Breakthrough for Electric Aviation
By Derek Brouwer
Business
“This is going to be a phenomenal year for venture investing in Vermont, literally off the charts compared to 2020, which as you recall was essentially the best year ever,” Cross said. “I suspect that this year, driven by the Beta Air fundraising, Vermont will end up with a 500 percent increase in funding dollars and perhaps a doubling of the number of deals done.”

Hall served as an adviser to one of the companies in the Fresh Tracks portfolio, Cross said.

“It’s not surprising that she would innovate a better teaching platform,” he said, adding that Nicole Stata, a cofounder of Boston Seed, is a University of Vermont alumna who has maintained close ties to the state.

Janice St. Onge, president of the Flexible Capital Fund in Montpelier, said venture capital funds and high net worth individuals are behind the InSpace investments.

“It is nice to see a woman cofounder get that kind of capital in the door and such a quick period of time,” said St. Onge, who has spoken in the past about women and investing. “Women cofounder or not, that’s a pretty large round to happen in Vermont.”

Hall grew up in Armenia and earned a master's degree and a doctorate in computer science and data science at the University of Vermont. She met her investors last year after she showed her concept to other entrepreneurs and asked them about raising capital to grow, she said.

"I had no clue at the beginning how to go about it," Hall said. "They sent introductions to their investors, and it was a very, very quick process."

Champlain College said on its website in October that InSpace is designed to mirror the activity and interaction of a real classroom.

“It allows participants to break free of ‘Brady Bunch’ boxes to create a fun, natural, and engaging environment that fosters interaction and collaboration,” the college said. “Each person is represented in a video circle that can freely move around the space. When people are next to each other, they can hear and engage in conversation, and as they move away, the audio fades, allowing them to find new conversations.”

Hall said Monday she plans to stay in Vermont and continue teaching at least one class each semester at Champlain College while serving as CEO of InSpace, which is located in the Hula co-working space in Burlington.  She added that she thinks remote learning is an important part of the future for students and teachers, even as the COVID-19 pandemic recedes.

"In my opinion, this is the most exciting time to be in higher ed," said Hall, saying that while the initial transition to remote instruction was difficult and sometimes painful, software developers learned valuable lessons — often from educators who suggested changes.

"I was just talking to someone about virtual office hours," said Hall. "Every single person who has used InSpace is never going back to in-person office hours."

Correction, June 8: The original headline for this story reported an inaccurate figure for the investments. The article misstated when the company was founded.
Prev
Next