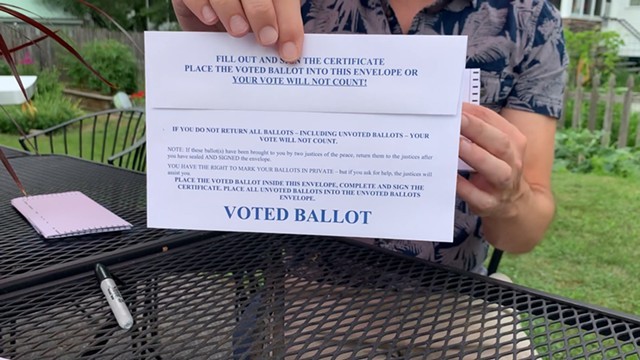 He also urged lawmakers to return to the topic next session and extend the changes to primaries and local elections, too.

“I’m signing this bill because I believe making sure voting is easy and accessible, and increasing voter participation, is important," Scott said in a press release. "Having said that, we should not limit this expansion of access to general elections alone, which already have the highest voter turnout."

The bill, S.15, will require town clerks to mail ballots to all active, registered voters ahead of the biannual statewide elections. Voters could then mail their ballots, deliver them to the polls or vote in person. The state used the same system for last year's record-breaking presidential election, which resulted in a 74 percent voter participation rate, six points higher than the 2016 presidential election.

Learning from last year's process, lawmakers included in the bill a provision that grants voters a chance to fix ballots that were returned incorrectly. About 1,500 so-called "defective" ballots were identified last November.

The new law also codifies several other pandemic-era election changes. Clerks can start processing absentee ballots up to 30 days ahead of Election Day, while towns will be able to offer outdoor or drive-thru polling places. School districts and municipalities will also have the option to mail out ballots during local elections, though it will not be a requirement. And the Vermont Secretary of State’s Office will be required to produce a report on how to improve access for non-English-speaking voters.

Scott, a Republican, signed the bill at a time when GOP legislatures in several other states are moving to restrict voter rights. The Vermont Public Interest Research Group, which lobbied for the changes, celebrated the state’s efforts in a press release on Monday.

“More than 9 out of 10 Vermonters support making voting easier,” said Paul Burns, the group's executive director. “This legislation is one big step toward making Vermont the most voter friendly state in the nation."
Prev
Next