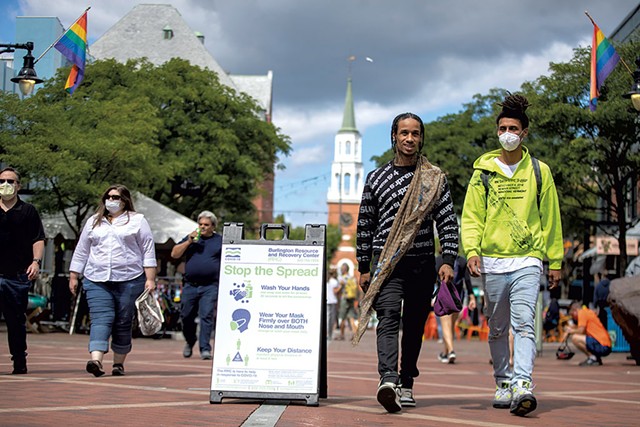 Fully vaccinated people in Burlington no longer have to wear facial coverings in city buildings and retail stores.

City councilors voted unanimously to lift the city's mask mandate on Monday night. The move comes as the state announced that 79.2 percent of Vermonters age 12 and up have received at least one dose of the coronavirus vaccine. Gov. Phil Scott has pledged to lift any remaining COVID-19 restrictions once the state reaches the 80 percent vaccine threshold.

Mayor Miro Weinberger had sought to rescind the city's masking order in mid-May, after the state announced that fully vaccinated people could go mask-free in most situations. But a council majority voted to delay the action after some members raised concerns that younger retail workers may not be inoculated until June.

The city's mask order had been in place for more than a year.

Unvaccinated people must still wear masks in Queen City buildings and stores, and businesses may turn away unvaccinated customers if they refuse to mask up, the council's resolution says. Businesses may also "enact stricter requirements about face covering use than the State requires," according to the measure.

Fully Vaccinated Vermonters Can Ditch Masks in Most Situations, Scott Says
By Derek Brouwer
Off Message
People are required to wear masks on public transportation, in schools and in health care facilities, regardless of their vaccination status.

Later in the meeting, councilors passed a resolution that urges state and regional transportation officials to refocus a major study of Interstate 89 to consider non-motorized modes of travel.

The resolution, cosponsored by Progressives Jack Hanson (East District) and Jane Stromberg (Ward 8), targets the Chittenden County I-89 2050 Study, which is examining various road improvements and new exits along the corridor's 37-mile stretch in the county. The councilors argued that the state should not be investing in vehicle infrastructure during the global climate crisis.

"I think it's really critical when we're doing these long-range transportation planning studies ... that we are not spending expertise, time, energy and money looking at expanding automobile infrastructure," Hanson said. "Going further down this road of automobile dependency is really wasteful."

The resolution asks that the study, also called "Envision 89," instead consider how to reduce vehicle travel and "create a safer, more equitable, and more sustainable transportation system in Chittenden County."

Councilor Mark Barlow (I-North District) cast the lone no vote, explaining that he thinks some of the proposed improvements would make it safer for pedestrians and cyclists. "I would hate to throw out all that good work," Barlow said.

The city will send a copy of the resolution to the Chittenden County Regional Planning Commission and Vermont Agency of Transportation, which are leading the study.

"We were given the invitation and the opportunity to weigh in," Hanson said. "I think it's important that we do that and make our voice heard."
Prev
Next