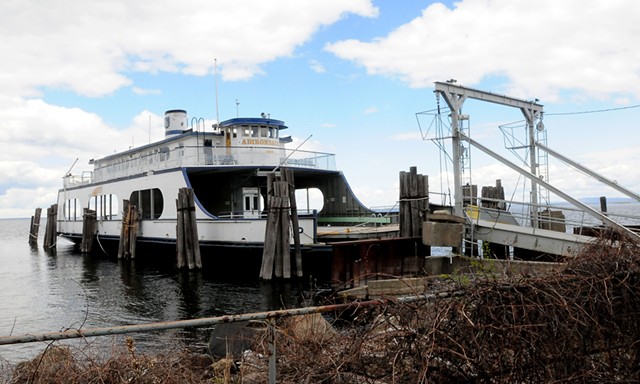 Lake Champlain Transportation is scrapping plans to sink a retired ferry in Burlington Bay after lawmakers and environmental groups warned that scuttling the 108-year-old vessel could further pollute the lake.

The company and state officials on Tuesday withdrew the application for a permit that the Department of Environmental Conservation had approved in March, and which environmental groups appealed in court.

“We’ve concluded, in consultation with the transit company, that in light of the rising tide of public opposition, the cost of the project due to the appeal of the lake encroachment permit, and the pending review by the City of Burlington, that it is best not to move forward,” said Laura Trieschmann, the state’s historic preservation officer.

The state Department of Historic Preservation was a co-applicant for the permit because the sunken Adirondack would have become property of the state, as well as part of the network of historic shipwrecks called the Lake Champlain Underwater Historic Preserves.

Instead, the Addy, as she is known, will be scrapped, Trieschmann said. John Paul, port engineer for Lake Champlain Transportation, declined to comment.

The ferry operated for 65 years on the lake, mostly as a summer ferry between Burlington and Port Kent, N.Y., where she now sits awaiting her fate.

The company scuttled the project following scrutiny from lawmakers in Montpelier, who were powerless to retroactively block the state permit but who nevertheless lambasted it. They are now considering a three-year moratorium on such sinkings.

The proposal had faced further review by the City of Burlington, whose Harbor Commission held a hearing on the plan earlier this month and had another one scheduled for June. The city was still determining whether it had jurisdiction over the sinking, which was to take place in 70 feet of water about a mile off Burlington’s shoreline.

Trieschmann, however, said a city ordinance against abandoning vessels in the bay made it clear the project — even had it survived the appeal — would have required a waiver from Burlington’s harbormaster.

“As people learned more and more about it, the opposition was increasing,” Trieschmann said. “As we’ve said from the start, if there is strong opposition to this, we will not go forward.”

She said she was disappointed because the Addy would have added a new type of dive site to the preserves network. Proponents argued the new attraction would both preserve the historic ferry and draw tourists.

The company had already begun removing engines and oil tanks from the ferry, but trace amounts of lead paint and PBCs were still expected to remain the vessel.

“It just never made any sense to us to use the lake to sink anything, let alone anything of this size,” Groveman said Tuesday.

While he understood the benefit the project might have brought to “a small community of passionate recreationists,” the contamination risk outweighed that, he said.

“This never seemed to serve the greater public good,” Groveman said.
Prev
Next