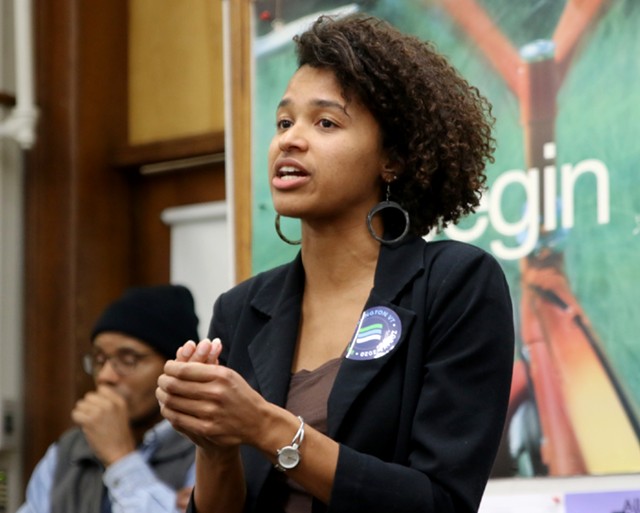 Burlington City Councilor Zoraya Hightower (P-Ward 1) will serve as the next executive director of the Peace & Justice Center, a Burlington-based nonprofit that has fought for human rights for four decades.

Hightower, who starts on May 20, will replace Rachel Siegel, a former Burlington city councilor who has led the nonprofit since 2013. The center announced Hightower's hiring in a press release Monday morning.

“It's just a position that fits me really well,” Hightower told Seven Days. “I’m really excited to support and help the Peace & Justice Center … figure out what it wants to be and help it grow.”

The position will be Hightower’s first foray into the nonprofit sector. For the last five years, Hightower has worked as a manager and analyst at Resonance, a Burlington-based private company that helps fight poverty through federally-funded global development projects.

Before the pandemic, Hightower's consulting work took her to places such as Australia and Kenya — trips that would now conflict with her council work, she said.

“I think it’s going to be nice to be able to limit my scope a little bit from the whole world to being a bit more present in Vermont,” she said. “I’m really looking forward to that.”

Hightower will manage a staff of six and oversee the nonprofit’s operating budget, which was about $392,000 for the fiscal year that ended in September 2020. More than half of the center’s revenues come from memberships and donations, with the rest stemming from paid workshops, grants and proceeds from the Peace & Justice Store on Lake Street, according to the organization's 2020 annual report.

After little more than a year on the council, Hightower has become one of the leading voices for racial and social justice. This past March, Hightower championed a Progressive-led push to ban no-cause evictions in Burlington and partnered with former Democratic governor Howard Dean to reinstate ranked-choice voting in Queen City council elections. Both ballot measures passed this March with more than 60 percent support, though the charter changes await legislative approval.

Hightower also serves on the city’s joint committee of city councilors and police commissioners, which is overseeing a functional assessment of the Burlington Police Department.

“I’m ready to focus more on justice work full-time instead of just on city council,” she said. “I’m just really excited that I get this opportunity to make this a job instead of just a hobby.”

Board members have already welcomed Hightower to the team.

“Zoraya Hightower is a poised, intelligent, compassionate, and dynamic leader," Jayna Ahsaf said in the press release. "The potential for this organization’s growth, capacity, and impact are limitless under her direction.”

Correction, May 11, 2021: Because of a miscommunication, a previous version of this story misidentified the number of employees Hightower will oversee.
Prev
Next