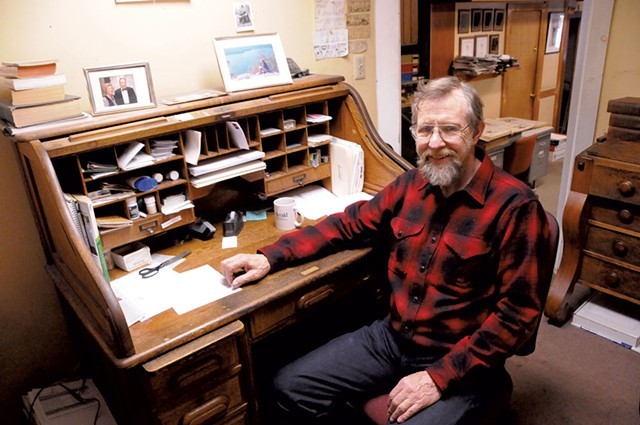 Drysdale passed away in the company of his wife Marjorie and his sons Robin and Jamie, the paper noted, adding that a full obituary would appear in the next issue.

"He was a really avid newsman, but he was also a really intent member of the community," said the paper's publisher, Tim Calabro.

Calabro was a photographer when, in 2015, he purchased the then-140-year-old paper from Drysdale. At the time of the purchase, the paper was called the Herald of Randolph.

"He was involved in all kinds of arts things," Calabro said. "He helped direct a singing group in town called the Randolph Singers; he carried on a great speech-writing scholarship at the high school that his mother started. He was really into seeing that Randolph was a thriving place, but he was also intent on making sure that the way that that happened was through good, honest news, an inspiration that drew people to him."

The reputable editor had another side, too — a wry sense of humor.

"A lot of the interns ended up receiving prank calls from him after the paper had gone to bed on a Friday," Calabro said. "He'd shuffle back to his office and he would put on a fake voice and call an intern and harass them about, 'Why did you spell this name this way in the paper?' or something like that. He loved that kind of humor."

He was approachable, said Janet Roberts, the paper's receptionist and an employee since 1985. If he had time, she said, he'd speak with whomever happened to stop by the newspaper's office in Randolph. She recalled Drysdale following visitors out the front door, deep in conversation.

"He really loved people, the people in this town and other towns," she said. "He always wanted to hear people's thoughts, even if they disagreed with an editorial or an article."

Despite penning thousands of stories, Drysdale considered himself more of a writer than a reporter, he told Seven Days during a 2016 interview about his book, Vermont Moments: A Celebration of Place, People, and Everyday Miracles. He recalled collecting typewritten copies of his favorite articles, editorials, obituaries and even poems in a leather satchel. Eventually, he decided to turn them into a book.

"I opened up the satchel and found a zillion moments of happiness, sadness, adventure," he said.
Prev
Next