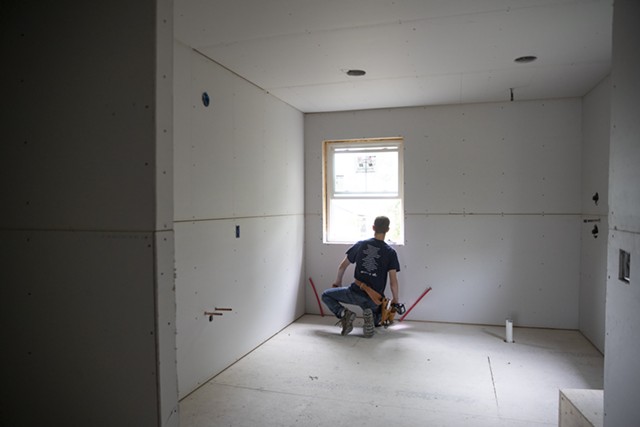 Patrick O’Brien, a senior manager at S.D. Ireland construction company, got a call a few weeks ago from a woman in Montpelier who was hoping to draw the company’s attention to central Vermont.

She was seeking a home, and she knew other people were, too. There are fewer than a half dozen homes for sale in the Vermont capital — one priced at over $1 million.

“She was looking for something where potentially she could age in place,” said O’Brien. “But her general statement was that Montpelier is in dire need of housing of all sorts.”

O’Brien was a logical person to call, because Williston-based S.D. Ireland constructs about 100 units of housing each year. But the company builds only in Chittenden County, and O’Brien said the company has no plans to expand its range. Salaries in the rest of the state aren’t high enough to support the rents landlords would charge, and it’s too expensive to enter an unknown political and permitting landscape, he said. And the company already owns land in Chittenden County.

He noted that few homes have been built in Montpelier in recent decades.

“I hate to say it: There are no-growth towns,” said O’Brien. Without some background knowledge of a municipality's political climate and permitting processes, he said, it doesn’t make financial sense to build somewhere new. “There are no towns that roll out the red carpet,” he said.

Constraints like these broaden the division between Chittenden County and the rest of the state when it comes to housing, jobs and mobility.

Vermont lawmakers and other leaders have been trying for years to add to the state’s housing stock. To that end, lawmakers in 2017 passed a $37 million bond and charged the Vermont Housing and Conservation Board with leveraging the money to create workforce and low-income housing. The VHCB says the money was used to create about 850 new units. And this year, Gov. Phil Scott proposed using $250 million of federal COVID-19 relief money to build 5,000 homes.

Some Burlington Homeowners Shocked by Reappraisal Figures
By Courtney Lamdin
Off Message
The state’s housing shortage is acute in many markets. The number of active listings dropped 67 percent between March 2020 and March 2021, according to the Vermont Association of Realtors March market report.

Intense interest from out-of-state homebuyers has contributed to the supply problem. Last year, the number of residential property sales in Vermont to out-of-state buyers increased by about 1,000, or 38 percent over the previous year, according to John Adams at the state’s Agency for Digital Services.

Virtual Buying and Selling Transforms Real Estate
By Amy Lilly
Real Estate
Meanwhile, in most parts of Vermont, builders say, it just doesn’t make financial sense for them to construct homes in the most desirable price range, between $250,000 to $350,000.

Although there are a host of reasons — including a shortage of construction labor — one of the most pressing is rising materials costs. The National Association of Homebuilders says lumber prices have risen more than 180 percent since last spring. Prices for electrical wire, insulation and vinyl are going up too.

“The materials price increases have been so great, the land costs are so high, that you can’t justify the increased cost of building a small home,” said Denis Bourbeau, the president of the Vermont Association of Builders and Home Remodelers. “To build a 1,200-square-foot house, I’d be out $365,000.”

For those who can’t spend $1 million, multifamily housing is still an option, especially in Chittenden County. While there’s little new home construction under way in most of the state, multi-family housing growth has been strong in places like South Burlington and Burlington for the last several years, and the units are still within the grasp of many.

Construction costs of these homes can be spread among many units, said Bradley. Such economies of scale help S.D. Ireland manage high materials prices, O'Brien said. The company expects to construct 100 units this year in Burlington, South Burlington and Colchester, including a four-story, 62-unit apartment building.

Going back 21 years, the average annual number of new housing units built in
Chittenden County’s was just 286 per year, said Brad Minor, a principal at the Allen, Brooks & Minor real estate firm in Burlington. In the last 10 years, however, that average was 425 new units per year. And the firm's projection for 2021 is 536 new units in Chittenden County.

Minor noted that the high materials costs might suppress the number of anticipated new units by the time he does another report in June. “I won’t know that until I talk to developers,” he said.

Despite all that construction, the vacancy rate is still low in Chittenden County. Over the last five years, it has been around 2.3 percent.
Prev
Next