Winooski Schools Will Keep Police Officer Next Year; Burlington Scales Back the Position | Off Message 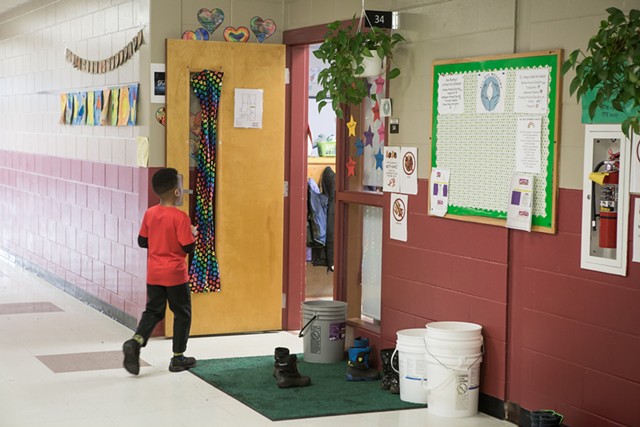 After months of uncertainty, the Winooski School Board voted on Wednesday to keep a police officer at its school building next year. The 4-1 vote also called for the creation of a group that will make recommendations by November about the police position for the 2022-23 school year.

The vote came one day after neighboring Burlington voted to remove its two officers from city school buildings. While one position will be eliminated, the other officer will be stationed at the Burlington Police Department unless there’s an emergency. That officer will wear a polo shirt and khaki pants, known as a “soft” uniform, when coming to schools for scheduled events.

An 11-member School Safety Task Force met regularly from last October to February, then proposed 10 measures aimed at promoting equity and inclusion in the Burlington School District. The removal of the officers was one.

The process in Winooski was slightly different. Last summer, a group of current and former students dubbed the Winooski Students for Anti-Racism called on the school board to eliminate the police position. It was one of a wide-ranging set of demands the group made.

At Emotional Meeting, Winooski Students Demand Anti-Racism School Reform
By Alison Novak
Off Message
In the months leading up to Wednesday’s meeting, the Winooski School District held community forums about school safety — four in English and six in other languages spoken by local families. The district also circulated a survey asking school staff, parents, students and community members to weigh in on what makes them feel safe and unsafe in city schools. That survey received 80 responses, and included comments both in favor and against keeping the officer.

At Wednesday’s meeting, many New American parents expressed their support for maintaining the position. Father of seven Hassan Kulo said through a Somali/Mai Mai translator that he feels calm and assured that everyone is protected when he sees the school police officer. A mother named Kadidja, speaking with the help of a French/Swahili translator, said that she feels safe knowing the police officer is watching over her children. Several parents said Officer Jason Ziter, who has been in the position for about four years, is like a father figure to their children.

In Winooski, Students Lead Charge for Anti-Racist School Reform
By Alison Novak
Education
Indra Acharya, one of the founding members of the Winooski Students for Anti-Racism, accused the district of making a “blatant power play” by enlisting school personnel — the home-school liaisons who acted as translators at the meeting — to call parents to come to the meeting in support of the officer.

“This is how white supremacy preserves, protects and continues,” Acharya said.

New Funding Sought for Liaisons Who Connect New American Families With Schools
By Alison Novak
Politics
Other speakers noted the importance of hearing from students who actually attend the schools.

“Times are changing and we need to see things from the point of view of the people who are in that building, who have lived through it,” said high school senior Yatrika Dhamala, who came to Vermont 10 years ago from Nepal.

Dhamala talked about her experience as a 5-year-old in a refugee camp, seeing police officers beating people, and said that being near a police officer still terrifies her.

“My mom did not bring me all the way to this country just to have me be in this system which discriminates against me and has me living in fear,” Dhamala said.

School employees also weighed in on the issue. Librarian Matt Gile recalled an incident three years ago in which Officer Ziter restrained an elementary school student in a room attached to the library.

“The harms of the SRO program are not abstract and hypothetical. They are real and occurring regularly, and they cannot be remedied by training or school policy change,” Gile said. “I would feel safer going into school every morning if the Winooski School District ended the SRO program.”

Thierry Mugabo Uwilingiyimana, the sole Black teacher in the middle and high school, urged parents to listen to their children and characterized the decision as “a moment that calls for moral leadership.”

Officer Ziter also spoke. He said that his position serves as an important bridge between the community, the school and the police department. He cited police department data that showed there had been a steady decline in student-police encounters over the last six years. The Winooski Police Department, Ziter said, understands “the importance of the work of anti-racism.”

The board’s decision ultimately hinged on two factors. Board members felt they needed more information and community feedback before making a final decision. But they also were under pressure to decide on the position for next school year because of a deadline for drafting a memorandum of understanding with the police department.

Before the vote, board member Mike Decarreau said that the board’s decision would not “negate nor deter the work we’re doing and will continue to do with respect to anti-racism.”

But Acharya later lambasted the decision on Facebook. The board “just did what it is good at: preserve and protect institutional racism. WSD IS RACIST!” Acharya wrote. “The board decided to use the same tactic it used last time: hide its true intention using ‘community input’ as a veil, delayed the decision, and decided to keep an armed SRO [on] the school premises.

"This is what they wanted from Day 1.”
Prev
Next