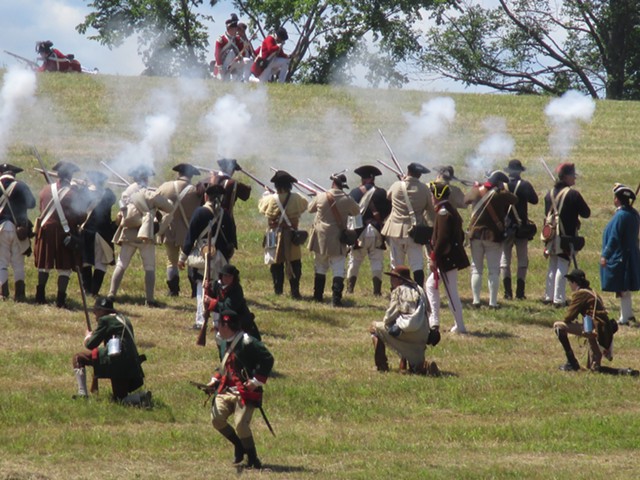 It’s never too early to start planning for a semiquincentennial.

That would be July 4, 2026 — the 250th anniversary of the adoption of the Declaration of Independence. Gov. Phil Scott's administration has included $25,000 in its budget to put together a 15-member commission to plan events around that date.

Also on the commission is Jonah Spivak, who is hoping to raise the profile of the upcoming 250th anniversary of Bennington Battle Day on August 16, 2027.

Although Vermont didn’t become a state until 1791, there was a lot of energy expended in 1776 in what was then a part of New Hampshire and New York to fight the British on Lake Champlain. Among other notable clashes was the Battle of Valcour Island, where the Americans suffered heavy casualties to the British in one of the first naval battles of the American Revolution.

Congress created a commission in 2010 to prepare for the 250th anniversary. In December, Scott signed an executive order creating a Vermont version.

Laura Trieschmann, the commission chair and the Vermont State Historic Preservation Officer, said the federal commission plans to focus not only on important Revolutionary War battles of the era, but also on farmers, artisans, tradespeople and other residents of the area at that time. Vermont’s events will do the same, she said, shining a historical light on the lives of Indigenous people, women and others who played less dramatic — but important — roles.

“We can’t all be Martha Washington,” Trieschmann said of the nation’s first first lady, who gained renown for spending time encamped near the front lines with her husband. “They had farms to run, and how were they doing that? What are the other stories we can tell?”

The 250th anniversary is an apt time to focus on lesser-known historical features of Vermont such as the boat-building industry on Lake Champlain, McClure said.

Related Vermonting: Pondering the Birth of a Nation at Mount Independence

Vermonting: Pondering the Birth of a Nation at Mount Independence
By Sally Pollak
Vermonting
“There are tons of things we can learn about what happened in Vermont and on Lake Champlain that just hasn’t been documented: Who was building the boats, who was sailing the boats, how were Indigenous people involved along the way, how were African Americans involved in our area?” McClure said. “Those stories are often left out of history, and to me, this is a great way for us to shine some more light on them.”

Vermont’s Revolutionary War-era African American population is one of the lesser-known areas of its history, although in recent years groups such as the Vermont African American Heritage Trail have done much to change that.

“Of the good number of African Americans in the State of Vermont, some probably even fought for the Green Mountain Boys under Ethan Allen,” said Pastor Arnold Thomas of the Good Shepherd Lutheran Church in Jericho. He speaks and writes about Vermont’s African American history, though he is not serving on the commission.

Elise Guyette, a scholar who lives in South Burlington and writes about the history of African Americans and other ethnic groups in Vermont, said the area had about 10,000 residents at the start of the American Revolution. Although it was illegal to enslave adults in Vermont, some of those residents were slaves who had been brought by settlers from Connecticut, she said.

“A lot of history just talks about the upper crust, and that doesn’t help us understand all the social and economic and racial and gender conditions of the time, and how people were with each other,” said Guyette, who is also not serving on the commission. “Most of them were kicked off the stage by the way history was written, and they need to be put back there.”

Trieschmann said anniversary events will run for two years, culminating in the anniversary of the Battle of Bennington in 2027, and will involve local historical societies, libraries, schools, and other community groups and events.
Prev
Next