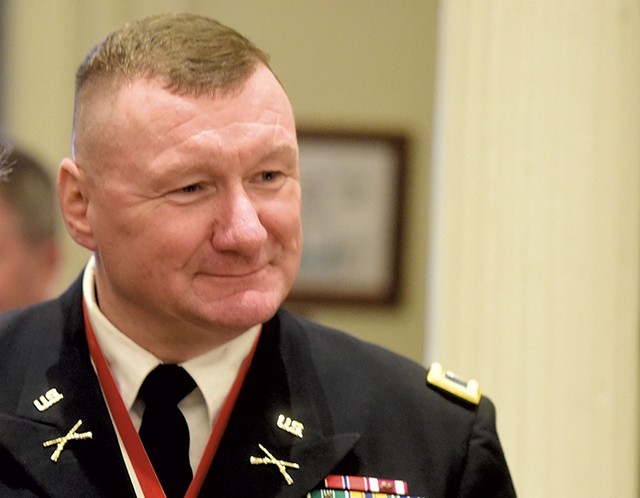 Vermont's top military official and the governor on Thursday condemned the alleged conduct of a Vermont National Guard solider who is accused of multiple counts of sexual and physical assault.

At a virtual town hall event, Adj. Gen. Greg Knight addressed the allegations in his initial prepared remarks and in response to questions submitted by the public, several of which asked about Blodgett by name.

“The actions described have no place in the Vermont National Guard or in our military,” Knight said. “Anybody who chooses to behave in such a way, they don’t deserve to be in uniform.”
In February, Blodgett was arrested on charges of sexual assault involving drug impairment and voyeurism. He was arrested again last week and subsequently held without bail on two counts of aggravated sexual assault and two counts of aggravated domestic assault related to incidents in 2015, 2017 and 2018.

Yet Blodgett remains a sergeant in the Guard, despite multiple criminal convictions during his 15-year career, as detailed in the Seven Days story.

Sergeant Accused of Sexual Assaults Remains in Vermont Guard Despite Criminal Record
By Jasper Craven
Crime
Knight, who called the allegations "repulsive," said that once he had the necessary information, he would do “everything in my authority” to “take the strongest and most appropriate action” possible under the law.

“Sometimes I have to make a hard decision in this job,” Knight said.

In a statement released by a spokesperson earlier Thursday, Gov. Phil Scott expressed confidence that Knight would do the right thing.

“Governor Scott is disgusted by the allegations and is aware that the Vermont National Guard is working through its processes to ensure that Mr. Blodgett is held fully accountable under military policies and civilian laws,” the statement said. “The Governor appreciates the Adjutant General’s commitment to more transparency and accountability so that individuals like this cannot tarnish the reputation of one of our most honorable and valuable institutions.”

At the town hall, Knight noted that he had the power to discharge a soldier under honorable conditions, or, if  “the survivor of an incident like this is willing to participate,” a soldier can be demoted and dishonorably discharged, Knight said.

“Those are the things that I have to consider, but we’re looking at that,” Knight said.

He cautioned, however, that it can take “six months to a year” to separate someone from the military when they are convicted of a crime.

Knight described how he had worked with lawmakers last year to establish provost marshal positions in the Guard to help bridge the gap between the civilian and military systems of justice. His first assignment for those marshals, who just started work three weeks ago, was for them to do a “thorough scrub of our criminal record systems.”

“The intent of that is to find any other bad actors that we have that we may not know about,” Knight said.

New Policies Target Sexual Misconduct in the Vermont National Guard
By Jasper Craven
News
Whenever a Guard member is arrested or charged with a crime, “we have a duty to report,” but, Knight acknowledged, “it doesn’t always happen” and “sometimes, we don’t catch everything.”

To improve this gap, Knight, a former police officer, said he would ask the Vermont Association of Chiefs of Police and the Attorney General's Office to ensure that people are asked when they're arrested whether they are in the Guard. If they are, Knight said, the Guard must be notified.

In addition, Knight encouraged anyone with information about Guard members' misconduct to come forward, either to him directly or by using an online application.

“If we have members acting aberrantly in this organization, if there is criminal activity and you know it and you want to come forward, use the [application],” Knight said.

The town hall event, which took place on Facebook Live, addressed a range of issues, including the Guard's overseas deployments, vaccination protocols and anger at the F-35 jets.

Col. David Shevchik, commander of the 158th Fighter Wing that flies the new fighters, said the Air Guard “is on track and on timeline” to complete its training by the end of the year despite the hurdles presented by COVID-19.

In response to a question about the suffering endured by people exposed to the noise of the fighter jets, Shevchik said the Guard does all it can to keep the impact to a minimum while still completing required training to get combat ready.

This includes doing all training exercises in remote areas and changing flight traffic patterns, such as flying as high as possible before landing.

“We do realize the impact on the community and we want to minimize that as much as possible,” he said.

Shevchik added that he expects additional noise studies to be conducted about the Guard’s air operations “later this season.”

And Knight added he is working with Vermont’s congressional delegation on “securing funding for noise mitigation measures.”


Correction, March 26, 2021: A previous version of this story misidentified the name of the app National Guard members can use to report misconduct.
Prev
Next