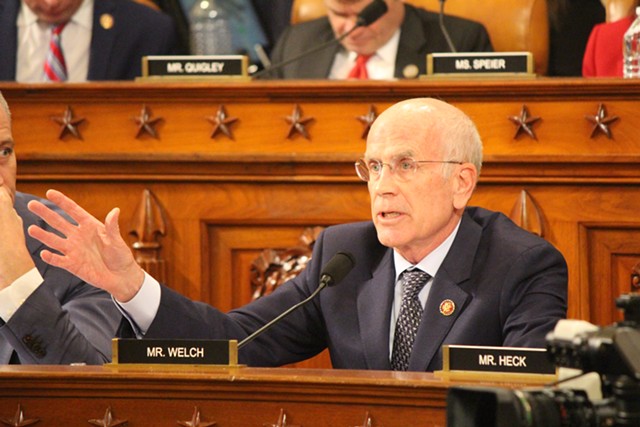 Burlington will receive $27.3 million in federal stimulus dollars to help recover from the coronavirus pandemic, U.S. Rep. Peter Welch (D-Vt.) told the City Council at a meeting on Monday.

Leahy: Vermont Would Receive $1.3 Billion Under Proposed Relief Bill
By Colin Flanders
Off Message
Half the cash should be available within 60 days, Welch said, with the balance to follow in six months to a year. Municipalities have until 2024 to spend the funds.

The money must be used for COVID-19-related expenses — such as providing financial assistance to small businesses or replacing lost city revenues — or for water, sewer and broadband projects, Welch said.

City leaders must now decide to how spend the money, Welch said.

“You are going to have a consequential job that's going to be very significant in the long-term future of the City of Burlington,” he said. “I wish you the best of luck in carrying out that responsibility and that burden.”

In anticipation of the federal funds, the city has lifted its hiring freeze and other "austerity measures" to reemerge from the pandemic, Weinberger said. He wants to use the money to help the city address racial justice, the climate emergency and housing challenges.

The cash will help “lead the way out of these dark times,” Weinberger said. “This is going to be a major focus over the months ahead, and we will make you proud.”

Monday's meeting was the first since Weinberger came under fire last week for his decision to remove his racial equity director, Tyeastia Green, from overseeing an assessment of the city police department. Though he ultimately backtracked, Weinberger was reminded during the meeting that some constituents and city councilors were unhappy with how he managed the situation.

Weinberger Removes Racial Equity Director From Oversight of Policing Study
By Sasha Goldstein
Off Message
“You crossed a line,” resident Sharyl Green said during public forum, reading from a letter she’d sent to the mayor. “Reinstating Tyeastia Green gets her rightful responsibility back in place, but does not get you, as mayor, back across that line.”

The council had ordered up the assessment last summer after voting to trim the city police force by 30 percent through attrition. Councilors passed a resolution in February that directed Green to execute the contract with the study consultants.

Weinberger instead tapped Darren Springer, a white man who serves as general manager of the Burlington Electric Department, to lead the process. Springer “has been neutral and separate” from debates over proper police staffing levels, the mayor said last week.

'I Made a Mistake': Weinberger to Allow Racial Equity Director to Oversee Police Study
By Sasha Goldstein
Off Message
After public backlash, Weinberger reinstalled Green and acknowledged in a statement that his decision was a mistake that “reveals my own bias."

But Weinberger’s reversal wasn’t sufficient for Lea Terhune. She said Weinberger should either resign or “take some crash courses” on antiracism. She also suggested the city council have a standing agenda item to update the community on its antiracist work.

Thirty-three people have signed a petition calling for Weinberger to step down by April 1, the beginning of his fourth term. Weinberger won reelection on March 2 by just 129 votes.

Councilor Jane Stromberg (P-Ward 8) said she hopes Weinberger will better collaborate during his next term.

Progressives Feel Empowered After Nearly Toppling Burlington’s Incumbent Mayor
By Courtney Lamdin
Politics
“I always find myself constantly using the word ‘unilateral’ when it comes to issues revolving around the mayor's decisions,” she said. “I want to see the mayor lean in with [the] intention of listening.”

Councilor Brian Pine (P-Ward 3) said he hopes the community will allow Weinberger to redeem himself. “We need to acknowledge that we are humans,” Pine said. “We do make mistakes. There has to be room for that.”

Weinberger said he didn't intend to disregard the council resolution, which directed Green to execute a contract but did not directly assign her to oversee the assessment process. He said his initial decision wasn't meant to detract from Green's "challenging and difficult work" for the city.

Also on Monday, the council unanimously approved a resolution that condemns hate crimes against Asian Americans and Pacific Islanders, which increased by nearly 150 percent in major U.S. cities last year during the coronavirus pandemic.

While the measure doesn’t directly mention recent events, it comes less than a week after a gunman killed eight people, including six of Asian descent, in the Atlanta-area. The shooter has not been charged with a hate crime, but the mass killing has raised awareness of increasing violence against the Asian community.

“It is important for all of us to come together and to show our Asian community that we stand with them, behind them in saying no to hate,” said Councilor Ali Dieng (I-Ward 7), who sponsored the resolution. “[In] Burlington, to me, we are trying to always do better.”

Councilors also bid farewell to Councilor Franklin Paulino (D-North District), whose last meeting was Monday night. After a two-year term, Paulino decided not to run for reelection in March and will be replaced by Mark Barlow, an independent, when the council reorganizes on April 6.
Prev
Next