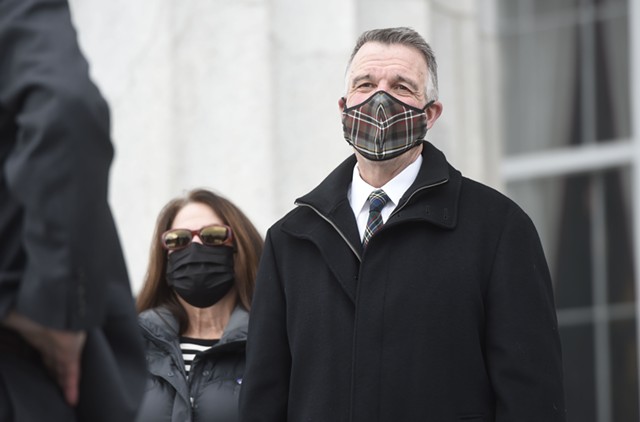 As more Vermonters get vaccinated against the coronavirus, the state is relaxing its restrictions on multi-household gatherings.

Gov. Phil Scott announced on Friday that unvaccinated people from two separate households can socialize, as long as they wear masks and keep a six-foot distance. Vaccinated Vermonters can also be a part of those gatherings, Scott said.

Earlier this week, the state said vaccinated households could get together and include one unvaccinated household. Friday's change, which is effective immediately, is the next most substantial shift in guidance for social gatherings since Thanksgiving, when Vermont banned such get-togethers due to climbing case counts.

Vermont Officials Blame Pandemic Fatigue, Complacency for COVID-19 Surge
By Colin Flanders
Coronavirus
People from multiple households can now also dine out together. Up to six people can be seated at the same table in a restaurant, Scott said.

“I know these changes are not as big as many other states, including those in our region,” Scott said. “But we feel they’re positive and safe steps forward, and you can expect more ‘spigot turns’ next week.”

The new guidance comes a day after President Joe Biden directed states to ensure every adult is eligible for a vaccine by May 1. Scott said Vermont will meet the target and, depending on vaccine supply, he expects the majority of people who want the vaccine will be inoculated “long before the Fourth of July.” Biden had also set the holiday as a goalpost for a return to near-normal.

Scott said his administration will release a vaccine eligibility timeline next week after learning more about the state's expected vaccine allotments.

“If the federal government delivers the supply, we'll more than deliver on the president’s eligibility goal,” he said.
To date, one in four Vermonters — or 138,700 people — has received at least one dose, Human Services Secretary Mike Smith said.

The state has now reached “Phase 5b” of its vaccine rollout plan, most recently opening sign-ups to residents aged 16 and older with high risk conditions such as cancer and heart disease. The next phase, which will likely begin in late March, will allow people age 60 and older to make vaccine appointments.

“I’ve said it before, but today I’ll get to show it: These vaccines are safe and effective,” he said. “It feels great to do my part in protecting my community and stopping this pandemic. I encourage all Vermonters to do the same.”

Friday's press conference began with a video appearance by Sen. Bernie Sanders (I-Vt.), who gave an update on the $1.9 trillion federal COVID-19 relief package President Biden signed on Thursday. Approximately 90 percent of Vermonters can expect to receive $1,400 checks, money that could be direct deposited in bank accounts as soon as this weekend, Sanders said.
Prev
Next