COVID-19 relief funds could provide women and people of color with meaningful and lasting economic gains in the new, post-pandemic economy. That's the view of advocates who hope to harness the unusual opportunities presented by the pandemic.

The largest impact could come from the estimated $1.3 billion that Vermont expects to receive from the latest federal stimulus package. Vermont lawmakers had leeway over how to spend the last big infusion of cash from a COVID relief measure, the state’s $1.25 billion share of the March 2020 stimulus. That led to the creation of economic grant programs aimed at helping women and minority business owners, and some much-needed funding for childcare.

This time around, advocates need to keep lawmakers focused on helping groups that have traditionally been left out, said Lt. Gov. Molly Gray, who convened a virtual meeting Monday with 200 participants to talk about women and the Vermont economy.

“We have a moment to think really strategically not only about how we get relief money out the door with this next amount of funding, but also how do we recover stronger,” said Gray, who mentioned childcare and paid family leave as key examples of ways to help women stay in the workforce. “The moment is right in many ways to act.”

Vermont women have suffered disproportionately from the closures that went into effect last year as a result of COVID-19. The state’s Joint Fiscal Office released data late last year showing that of the people in Vermont who had filed for traditional unemployment insurance in the last quarter of the 2020, 73 percent were women. The national ratio of cases is about 50-50 for men and women.

The Vermont Commission on Women and other groups are still trying to determine the reasons for the sharp difference in Vermont.

“It's really strikingly much worse than it is in the rest of the country,” said Cary Brown, director of the Vermont Commission on Women, noting that the burden of caregiving and helping with homeschooling have fallen disproportionately on women. “About four times as many women as men have just left the workforce completely. They've just thrown in the towel and said, ‘This is too much. I'm not doing it anymore.’ That’s going to have lifelong repercussions for those women and their families.”

One such data source is a University of Massachusetts study  carried out late last year on the impact of the pandemic. The results are due in a few weeks, said Jessica Nordhaus, director of Change the Story, a research group that works with the Vermont Women’s Fund, the Vermont Commission on Women, and Vermont Works for Women.

Nordhaus said early results show that 500 of the survey respondents were from Vermont, and of those, 89 percent were women. They reported a household income of $100,000 to $150,000, so “we’re not necessarily getting feedback from folks who are struggling economically,” Nordhaus noted. 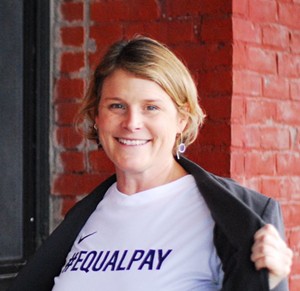 That group believes the focus should be the one-time stimulus payment, now set at $1,400 in the bill passed by the U.S. Senate last weekend; better access to the internet and technology; student loan assistance; more support with childcare and education; and mental health support. Nearly a third of respondents reported having a panic attack in the month prior to the UMass survey, Nordhaus said.

“It’s the young people in our state who are more racially and ethnically diverse, and therefore when we think about equity, it’s got to include a youth perspective,” she said.

The Vermont Women’s Fund is creating a database this year of Vermont women-owned businesses, the first ever. A similar effort is under way in Brattleboro, where Curtiss Reed Jr., who runs a nonprofit called Vermont Partnership for Fairness and Diversity, has used a COVID-19 grant to survey 480 minority business owners last year.

The pandemic has hit women of color particularly hard, said Brown. While many white-collar workers were able to stay in their jobs by working at home, people who worked in food service, retail, and other positions that serve the public lost their jobs early. Many of those jobs are believed to be gone forever.

“Women of color in particular are losing jobs nationally at a staggeringly higher rate than white women,” Brown said. "So it’s the increasing demands of unpaid caregiving education responsibilities and household labor.”

Panelists said this year presents opportunities to correct problems that have existed for decades.

“We have always asked too much of our caregivers,” said Brown. “The great opportunity that we have now is for it just being impossible to deny that anymore, if we can provide mental health support, livable wages, as well as workforce development, in response to what is going on with COVID, and keep those in place, we’ll actually fulfill that hope and dream of coming out of the pandemic better than when we went into it.”
Prev
Next