Want to Live at Shelburne Farms? Here's Your Chance | Off Message 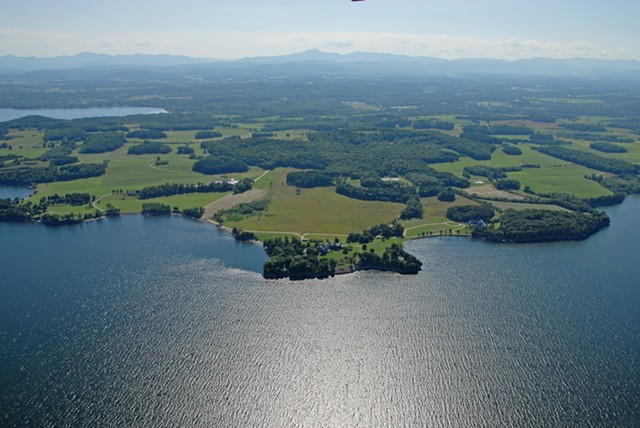 Shelburne Farms is raising money to buy back a 4.5-acre lot in the heart of its farmlands on Lake Champlain.

The parcel, which is listed on Trulia for $3.3 million, includes sweeping views of the Adirondacks, access to two lake beaches, and an interest in 27 acres of neighboring agricultural land.

The former hayfield is one of four long-term residential leases that the Shelburne Farms nonprofit, created in 1984, sold the following year to raise money for restoration work and programs on its now 1,400-acre property. The buyers in 1985 paid more than the appraised value for three of the leaseholds as a way of helping the new nonprofit, said Alec Webb, a fourth-generation member of the family that established Shelburne Farms and the president of the nonprofit.

The lot is now owned by a Lintilhac family trust, according to Shelburne town records.

Shelburne Farms in recent years borrowed money from other conservation groups to purchase two other leaseholds in that area, known as Windmill Hill.
Webb would like the property that is for sale to remain undeveloped and be returned to the nonprofit. But demand for building lots and homes in Chittenden County is high. According to a January market report from the Vermont Association of Realtors, the number of listings in Chittenden County dropped by about one-third from January 2020 to January 2021, while the median listing price rose 11 percent and the median sales price rose 10 percent.

“A very rare opportunity to build your home on Shelburne Farms and enjoy the lands and trails on this iconic property,” the listing says.

Shelburne Farms is located on the former estate of William Seward and Lila Vanderbilt Webb, who from 1886 to 1902 consolidated several smaller farms into a showplace that focused on innovations in agriculture.

Shelburne Farms is now a busy educational organization on the southern side of the state’s most populous county that before the pandemic hosted a steady stream of classes and events. There are about a dozen homes adjoining the 1,400 acres that hold a right-of-way through Shelburne Farms, said Alec Webb.

“In the normal course of events, Shelburne Farms would have become just a subdivision,” Webb said. “But what it’s really becoming is this amazing protected area for agriculture and education and this walking trail network." He said the area had drawn more visitors than usual in the last year as local people look for places to stroll outside during COVID-19.

Shelburne Farms has right of first refusal for the property, Webb said. Asked in a message about the family's plans for the parcel, co-owner Crea Lintilhac did not immediately reply.

“Our long-term dream would be to see the Windmill Hill area incorporated back into the farm’s larger core protected area,” Webb said.
Prev
Next