Vermont Small Businesses Will Have to Wait Months for Relief Money, Lawmakers Warn | Off Message 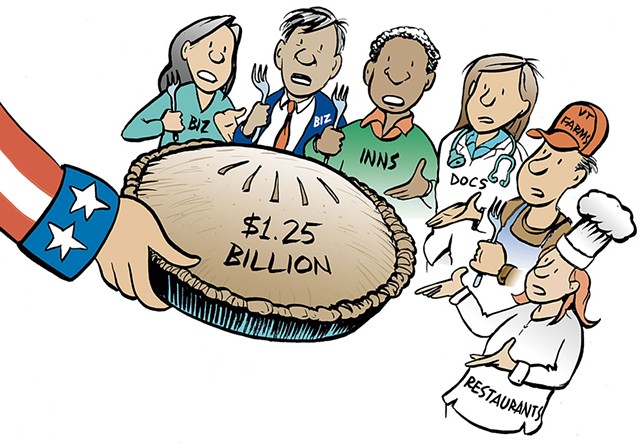 Members of Congress are putting the finishing touches on a $1.9 trillion relief package, which could get final approval in the U.S. House on Tuesday.

But Vermont lawmakers are already warning small business owners that it could be midsummer before they see any cash relief. Legislators must decide how and through what programs they will divvy up their expected $1.3 billion share of the pot, a process that could take months, House Speaker Jill Krowinski (D-Burlington) cautioned during a virtual Vermont Chamber of Commerce meeting on Monday.


“This is the part we really struggled with last session: The time that it took for [federal officials] to put the rules together,” Krowinski said.

Last year, Vermont received a $1.25 billion share of the $2 trillion CARES Act that Congress passed in March 2020. But it wasn't until early last July that the first business grants started accepting applications.

A similar scenario could also play out this time around, Krowinski said.

“Even if the money is approved in April or May, we may not get that until later in the summer,” she said.

That’s not soon enough for business owners who last applied for grants in the fall, said Kim Donahue, co-owner of the Inn at Round Barn Farm in Waitsfield.

“That’s really not OK,” said Donahue, who had heard the same timing estimate during a call with other lodging owners Monday morning. “We already have a tremendous amount of unmet need.”

Many small business owners are pinning their hopes on an economic development package now making its way through the Vermont Senate that includes $10 million in grants for businesses that weren’t eligible for state or federal COVID-19 grants last year. The Senate Economic Development, Housing and General Affairs Committee was due to hear testimony on that bill Tuesday.

Money for Business 'Safety Net' Inches Toward Approval in Vermont House
By Anne Wallace Allen
Off Message
Once the federal COVID-19 relief bill becomes law, the U.S. Treasury has 30 days to get the money to the states. Next, Gov. Phil Scott would make recommendations to the legislature, according to Joan Goldstein, commissioner of the Department of Economic Development. Lawmakers then would have to establish priorities and create grants programs.

Last year, the Agency of Commerce and Community Development delivered about $340 million to Vermont’s small businesses through such programs.

Goldstein said she was concerned about the hospitality businesses that have been closed, or severely limited, for a year now.

“We know that anybody whose business is pertaining to restaurants, lodging, gathering, entertainment, transportation to some extent — all of those are hurting,” she said. “Even if they got money before, they probably need more money until everything opens. Lodging properties are saying they are at 10 percent capacity. People just aren’t coming.”

Senate President Pro Tempore Becca Balint (D-Windham) said lawmakers will try to do as much work in advance as they can to speed up the process. They might have to return to the virtual Statehouse in August, as they did last year.

“I don’t think it’s what anybody wants, but it could be that we're going to have to keep the budget open, maybe come back again” for more work after the session ends in the spring,  Balint said. “We just don’t know yet; it’s too early.”

Even with practice creating the programs, Goldstein said, it will take months for lawmakers to decide where and how to spend the money. Vermont’s annual budget is generally around $6 billion, and policymakers are unaccustomed to having an extra billion to spend on programs such as education, childcare and broadband.

Clarification, March 9, 2021: The bracketed portion of the first quotation in this story has been adjusted for accuracy.