Magic Number: How Weinberger Won the Mayor's Race by 129 Votes | Off Message

Magic Number: How Weinberger Won the Mayor's Race by 129 Votes

By Courtney Lamdin and Sasha Goldstein 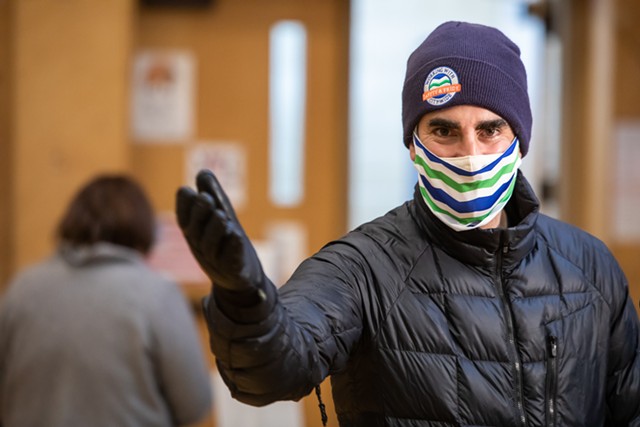 The margin? After a recount, just 10 votes.

Fast-forward to Tuesday. Ideological politician Max Tracy, a Progressive city council president, barely missed out on an upset of his own.

The margin? Just 129 votes, a mere percentage point separating him from incumbent Democrat Miro Weinberger. It was the tightest mayoral election in the city since Sanders won that storied campaign in March 1981. No recount has been announced this time around.

For Weinberger, it was also his worst showing of four campaigns. Put it this way: 57 percent of voters picked someone else.

Luckily for the incumbent, there were plenty of someone elses to go around. City Councilor Ali Dieng ran as an independent and picked up 13 percent of the vote. Four other lesser-known candidates, plus write-ins, combined to take about 2 percent of the vote. That left Tracy just 42 percent.

Some Tracy supporters might complain about the spoiler effect of those less-competitive candidates. But city data show there were plenty more votes out there for the taking.

While there was 6 percent more turnout this year than for the 2018 mayoral contest, only 38 percent of all registered voters cast ballots — pretty paltry for a year in which ballots went out in the mail to all active, registered voters.

With that in mind, here's a more comprehensive look at the votes that were cast, and where.

Going into the election, Weinberger needed to follow a pretty basic formula to win: Run up the score in the North and South ends of the city to offset a drubbing in the student-heavy, more progressive central districts.

True to form, he did well in the areas he needed, with at least about 50 percent of the vote in Wards 4, 5, 6 and 7. That's also where turnout was highest in the city, with at least 40 percent of voters casting ballots in each of those wards.
Ward 4, the western side of the New North End, led the way with 53 percent turnout, and Weinberger scored his best results there: 58.33 percent.

But Weinberger did worse this year than in 2018 across all eight city wards.
Some decreases were negligible, such as losing just 0.69 percent in Ward 4 and 1.52 percent in Ward 7.

Others were far more pronounced. For example, Weinberger won Ward 1 in 2018, but lost it this year when his support dipped by 12.9 percent. Ward 8 was even worse for Weinberger: His support plummeted by 22.6 percent.

Both wards are full of college students and are both represented by Progressive city councilors who supported Tracy.

The clearest picture of Weinberger's waning support was in the South District (Wards 5 and 6), where incumbent Councilor Joan Shannon was up for reelection. Shannon, a Democrat and one of the mayor's staunchest allies on the council, cruised to victory with 66 percent of the votes. Weinberger, meanwhile, mustered just 54.35 percent. 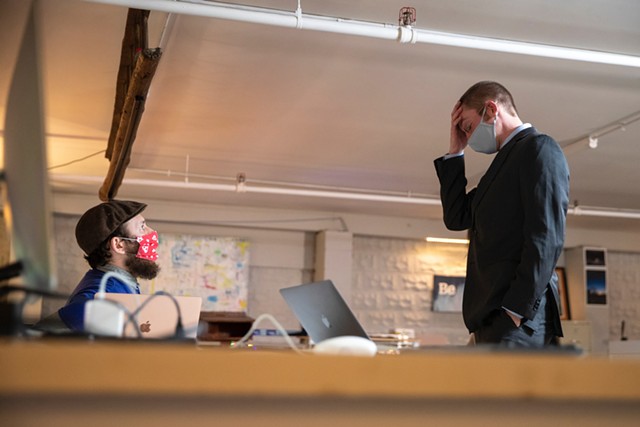 In 2018, Progressive-endorsed independent Carina Driscoll won 35 percent of the vote, while third-place finisher Infinite Culcleasure earned about 16 percent. With a third viable candidate again in the race in 2021, Tracy needed to pump up turnout to make up that 13-percent margin Driscoll lost by.

Six percent more voters did cast ballots in 2021. And Tracy claimed just as many wards as Weinberger did. But low turnout in the areas that the Prog challenger won may have cost him the election.

In Wards 1, 2 and 3 — where Tracy won more than 50 percent of the vote — voter turnout ranged between 32 and 36 percent. Those percentages were notably better than in 2018, when none of the three wards hit even 30 percent turnout.

In the Central District, Tracy even outpaced his fellow Progressive City Councilor Perri Freeman, who earned 59 percent of the vote to win reelection. Tracy, meanwhile, took 62 percent in Wards 2 and 3.

Yet in the student-heavy Ward 8, where Tracy dominated the field with 81 percent of the vote, turnout remained virtually the same as it was in 2018: a paltry 21 percent. So while as a percentage, the victory was impressive, it didn't carry many votes.

By contrast, all four wards that Weinberger won had at least 40 percent turnout. In Ward 4, where the mayor performed the best, turnout even eclipsed 50 percent, helping him pad his lead. The ward also returned the most absentee ballots, with 2,118. Ward 8, where Tracy had his best showing, returned 429 absentee ballots, the fewest of all eight wards.

Turnout numbers in a municipality such as Burlington can sometimes be slightly misleading. A total of 37,554 are on the voter rolls, but the city clerk's office only sent absentee ballots to 25,843 people.

That's because about 11,700 voters are considered "challenged voters," or "folks that we suspect don’t live in Burlington anymore," according to assistant city clerk Amy Bovee. Some common reasons include "voter inactivity, mail that is returned to us as undeliverable, or property records showing that they have sold their home and moved out of town," Bovee wrote in an email.

State law requires municipalities to wait until two general elections pass before challenged voters are removed from the rolls. Therefore, according to Bovee, "turnout is calculated based on the total number of active and challenged voters."

As may be expected, challenged voters are common in student-heavy districts because "they register while they are enrolled here, and then move on," Barbie Alsop, an inspector of elections in Ward 3, wrote in an email.

She estimated turnout percentages in such areas would be much higher if those voters had been removed from the rolls.


"Those of us checking people in saw pages full of challenged voters, none of whom appeared to contest the challenge," she wrote.

If turnout were calculated based on the 25,843 people to whom the clerk sent ballots, it would have been closer to 56.4 percent.

Still don't think your vote can influence a local election? Here's what Sanders thinks of that:

40 years ago today, I won my first election to become Mayor of Burlington by just 10 votes. 10 votes. Do not ever let anyone convince you of the notion that your vote does not matter. Your vote matters and we need you to stay involved in the political process. pic.twitter.com/KnmVtyvAh0 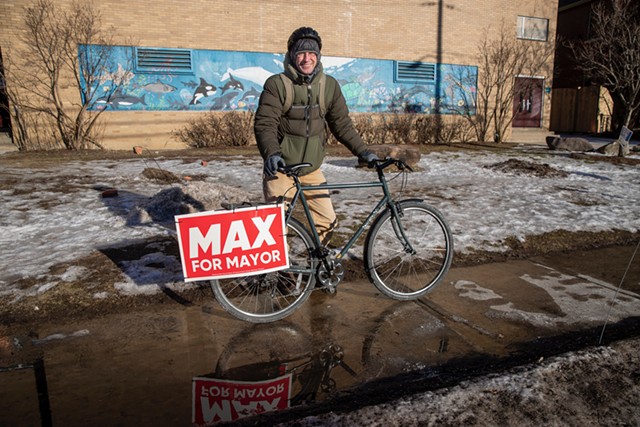 While Tracy just missed, all of the ballot items he endorsed did quite well on Election Night. Burlington voters, it seems, like Progressive policies, just not necessarily Progressive candidates. Perhaps some Weinberger voters were not voting for him, but rather against Tracy.

All seven ballot items passed with at least about 63 percent of the vote.

Weinberger publicly supported one: a charter change to give the city authority to impose fees on heating systems that run on fossil fuels. That measure passed with 64.5 percent of votes, though it now needs approval from the state legislature and the governor.

A Just Cause? Landlords, Tenants Battle Over Burlington Eviction Proposal
By Courtney Lamdin
Off Message
Other items favored by Progressives easily passed as well: A measure to allow cannabis shops to operate in the city, beginning in October 2022, passed (unsurprisingly) with 81 percent; and a charter change that will require a "just cause" for an eviction passed with about 63 percent. Tenant-heavy wards helped that one pass easily.

Finally, ranked-choice voting, a system the city abandoned in 2010, could now be back, at least for city council elections. That measure passed with 64.4 percent. It could first be used for races on Town Meeting Day 2022, if the legislature and governor approve.

Can Once-Maligned Ranked-Choice Voting Make a Comeback in Burlington?
By Courtney Lamdin
Politics
Interestingly, Democrats twice stymied earlier efforts to get the system on the ballot. In December 2019, a council subcommittee adjourned a meeting before the item could be moved to the full council, which could have put it on the Town Meeting Day 2020 ballot.

Last July, Weinberger vetoed a council-passed resolution that would have let voters decide on the system last November. Weinberger said he based his decision on the cost of printing an extra ballot. But last September, the council passed a version that applied only to city council races. Weinberger didn't veto that one.

Who knows how things would have turned out if ranked-choice voting had been in play for the mayoral race on Tuesday?
Prev
Next